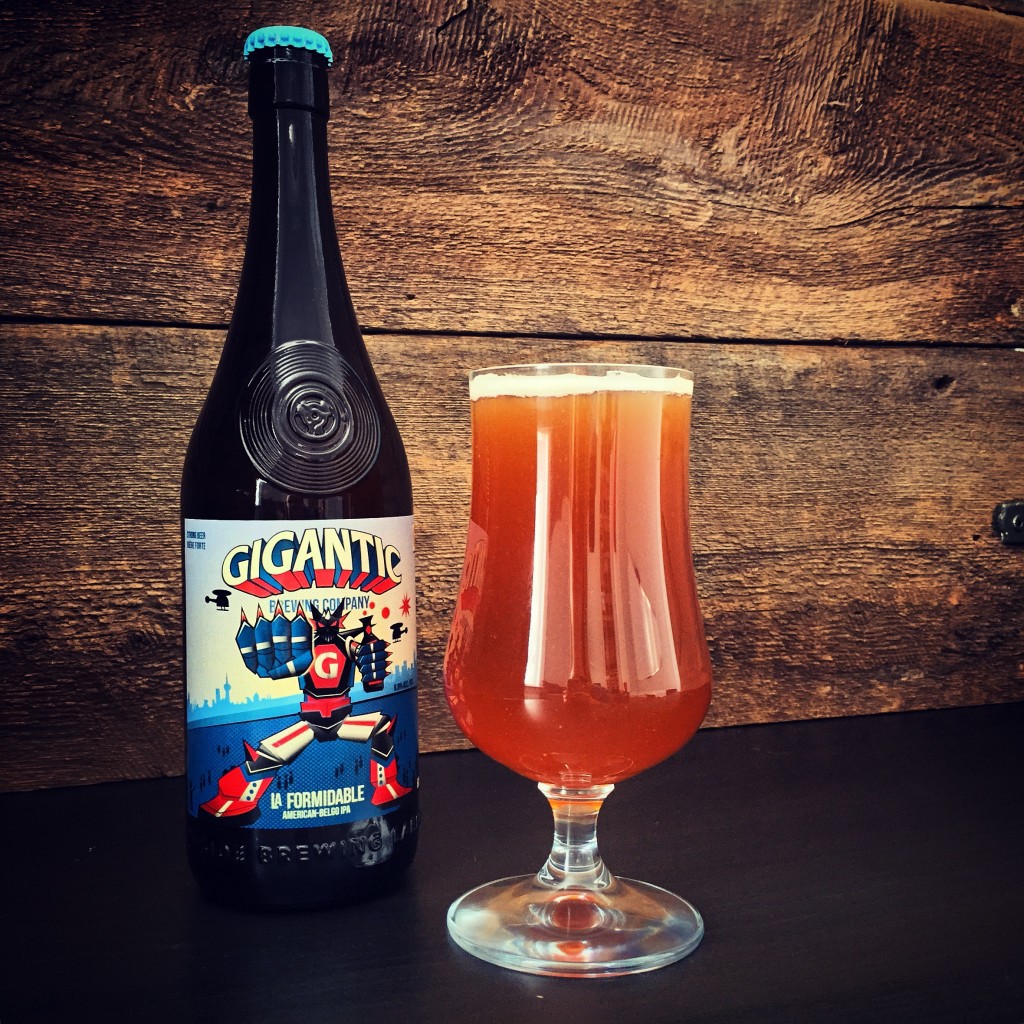 Portland based Gigantic Brewing recently traveled to Ontario, Canada to brew a beer in conjunction with B-Side Brewing Label at the brewing facility of Beau’s All Natural Brewing Company. This new collaboration, La Formidable American-Belgo IPA will be released on Thursday, February 26 across Ontario in Eastern Canada.

Gigantic was approached by B-Side Brewing to brew a beer in Ontario for distribution in this local market. The beer and the marketing that goes with this beer looks just as if it was brewed here in Portland. Unfortunately for us here in the Pacific Northwest we will not be seeing this bottle, well unless you can secure some from a beer trader.

VANKLEEK HILL – (Feb. 23, 2015) B-Side Brewing Label is announcing that Gigantic Brewing Company from Portland, Oregon has signed on to the label. Their new beer “La Formidable” American-Belgo IPA will be released on Thursday, Feb. 26 at 150 bars and restaurants in 37 towns and cities across Ontario, as the fifth and final beer for Beau’s Brewery’s month-long feBREWary celebrations. La Formidable will also become available in LCBO stores in early-to-mid March.

Launched in 2013, B-Side Brewing Label is “like a record label, for beer.” The label signs international craft brewer “artists” of renown to the brewing label. These international artist breweries create inspired recipes that are brewed in Ontario and made available fresh in the local market. B-Side beers are made with certified organic ingredients, and brewed in Vankleek Hill, Ont., at Beau’s. 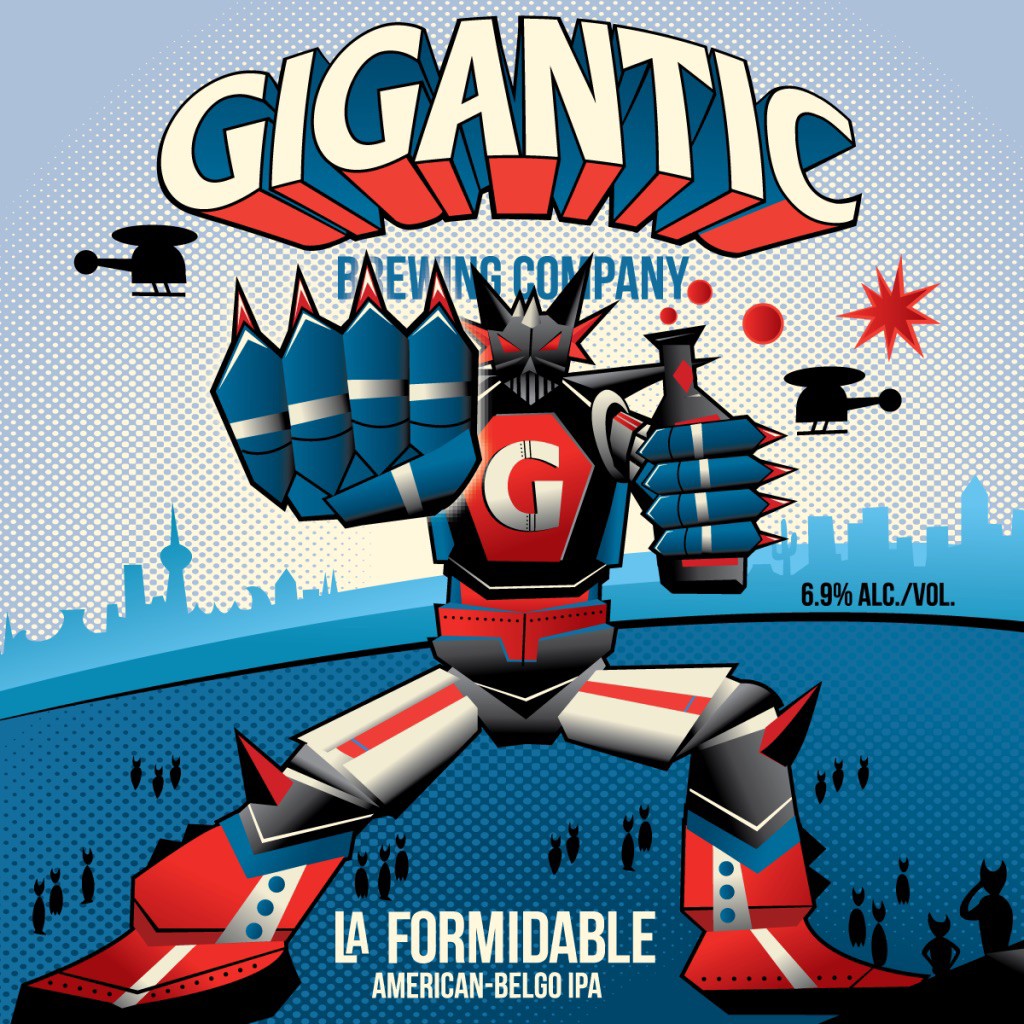 “I get excited about trying new beers when I travel, which inspired the idea for B-Side Brewing Label,” says Beau’s co-founder Steve Beauchesne. “With B-Side you get the cool experience of drinking beer from a brewery like Gigantic that’s literally on the other side of the continent, but the beer’s fresh and tasty because it was brewed locally. We’ll keep signing new breweries to the label so eventually we can offer a portfolio of some of the best beers on the planet, made right here in Ontario,” he adds.

Gigantic is the second international artist to sign onto B-Side Brewing Label, which is operated by Beau’s Brewing Company. Gigantic Brewing’s Van Havig and Ben Love are veterans of the diverse and lively craft beer scene in Portland, Oregon, where their independent, artisanal brewery is located. Despite their tongue-in-cheek name, Gigantic Brewing operates on the principle of “making exceptional beer, rather than a lot of beer,” according to its founders.

Gigantic beers have won Platinum at Mondial de la Bière (2013), Gold at World Beer Cup (2014) and Bronze at Euro Beer Star (2015). The recipe for La Formidable was several months (and test batches) in the making, and the brewers are excited to finally see their beer in the hands of Ontario craft beer drinkers this week.

“The guys at Beau’s have been our friends for a while now, and this collaborative project is another great excuse for us to hang out and do what we do best – make beer, and drink it,” says Van Havig. “Plus, having no musical talent this is the closest I’ll ever come to being in a band, so that’s pretty cool too,” he laughs.

Created by Gigantic Brewing for B-Side Brewing Label, La Formidable is a 6.9% American-Belgo IPA; a relatively new hybrid beer style that crosses bold, citrusy American-style hop aromas with the signature fruity, spicy and earthy elements of Belgian yeast. The hazy golden ale exudes appetizing aromas of grapefruit and orange, along with light piney notes and white pepper. The flavour offers a firm but balanced bitterness that is complemented by citrus fruitiness. The finish is spicy with earthy undertones.

Havig and Love are in Ontario this week to celebrate the release of La Formidable at several launch events across the province: in Toronto on Thurs. Feb. 26 with a “Meet the Brewers” event at Bar Volo from 4-7 pm; at The Black Tomato in Ottawa Fri. Feb. 27 for a “Meet the Brewers” event from 7-9 pm; and at the Beau’s Brewery in Vankleek Hill to greet visitors on Saturday Feb. 28 from 1-4 pm. Samples of La Formidable will be pouring at each of these events, and Havig and Love will be available to answers questions and chat about their new beer.

Gigantic Brewing Company is an independent, artisanal brewery located in the Southeast quadrant of the Peoples Republic of Portland. Brewer/Owners Ben Love and Van Havig are veterans of the Oregon brewing community.