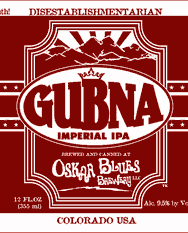 Currently unavailable in Oregon, this event is folks in the Portland metro area’s first chance to purchase the hearty Lyons, Colorado favorite. As well as being able to try the bold new hop monster, attendees will be able to take cans home with them while supplies last.

Emphasizing that complexity of character can arise from simple elements, this ale is made with three malts and one hop. Its light amber color and slightly spicy malt character are derived from the use of German Dark Munich Malt and Rye Malt respectively. North American 2-row barley combines with the other grains to lay the foundation for the hop onslaught to come. Summit hops are used exclusively in the boil for bitterness, flavor and aroma but it doesn’t end there. Post-fermentation dry hopping allows the 10% ABV monstrosity to gently coax the citrus rind and grapefruit aroma to join the 100 IBUs already present. This beer should greet you with a pungent citrus blast, provide a spicy yet round middle and finish with a brisk, clean bitterness.

Holy cow! This beer is, excuse my Spanish, is bad ass! It’s a flavor rocket ship waiting for take-off. When released from its can confine, just get ready, hold on to a chair or something. It takes off immediately. Be sure to hang on to the huge aroma, and gigantor flavor before the ride comes to an end. I mean, a lil ol 12 oz. can only lasts so long.”

By The Bottle is located at 104 W. Evergreen in downtown Vancouver, Washington (next to Salmon Creek Brewpub).

Keep your eyes peeled for a new tasting room at BTB soon!