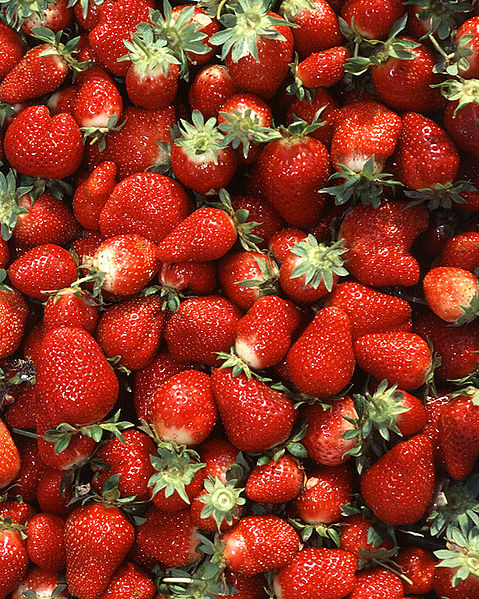 There has always been something about strawberries that seem to encapsulate the spirit of the spring and summer months. Strawberry lemonade, strawberry rhubarb pie, strawberry jam, and best of all, freshly picked plump ripe strawberries. Strawberries are hybrid fruits that are cultivated worldwide to produce, in my opinion, one of the most delicious treats of all time. The garden strawberry that we know so well and enjoy so readily this time of year is the result of breeding two species the wild plant, one from Eastern North America and one from Chile, and first introduced in France in the 18th Century. The result is a fruit that is not a true botanical berry such as grapes, blueberries, and blackberries, but rather an aggregate accessory fruit, meaning that some of the fruit’s flesh is derived not from the ovary but from some adjacent tissue exterior to the carpel or gynoecium. Once referred to as “false fruits,” other examples of accessory fruits include figs, mulberries, and other pomes such as apples and pears.

In addition to being best enjoyed freshly picked, strawberries are prepared into a number of tasty treats such as creams, pies, cereal bars, and smoothies. In Greece, one particularly favorite use of strawberries, is to sprinkle them with sugar before dipping them in Metaxa, a type of brandy. This is a popular dessert there. Beer lovers may notice that the fruit ihas become more and more popular as a flavor component in malted barley brewed beverages. Though it has been pointed out that some hop varietals impart flavor characteristics likened to strawberries, there are in fact actual brews that use the scrumptious fruit to add their own deliciousness. Here’s a look at some you might find:

Abita Strawberry Harvest Lager: One clear sign that summer has arrived in the American South is the arrival of Strawberry Harvest Lager from Abita Brewing in Abita Springs, Louisiana. From one of the South’s best craft beer producers, this light seasonally fitting release is an unassuming 4.2% ABV lager showcasing base malts of Pilsner and wheat and softly seasoned with Vanguard hops. Real Louisiana strawberry juice is added to the beer after filtration, resulting in a soft, crisp, and slightly hazy beer that pairs well with salads, pastas, and fresh cheeses. 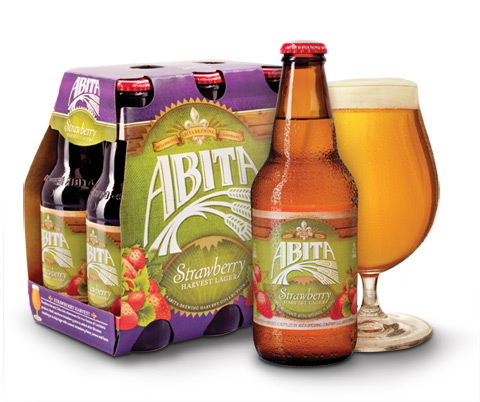 Cascade Strawberry Ale: Portland’s Cascade Brewing is widely know for their addition of fruits in the Lactobacillus barrel-aged sour ales. With famous and noteworthy tart tipples such as their Apricot, Kriek, and Blueberry brews, their 2011 Strawberry release is one of the most interesting and flavorsome to be found. The beer is a blend of wheat ales that were aged in oak barrels for up to 12 months before aging on strawberries for an additional three months. Limited bottles were released solely through the brewery’s two pub locations and if you get a chance to snag one for yourself, don’t hesitate. 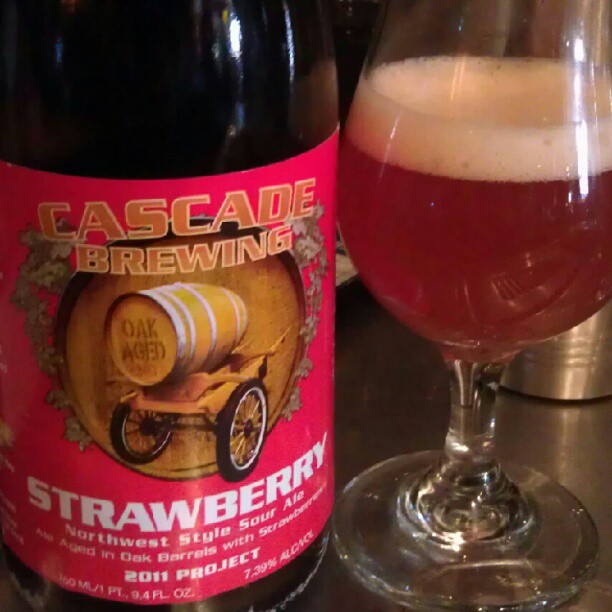 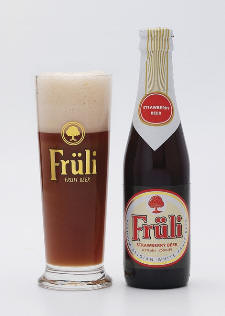 Van Diest Früli Strawberry Beer: From Brouwerij Huyghe in Melle, East Flanders, Belgium (they also produce the world famous Delerium Tremens). Früli is a light 4.7% ABV beer and fruit blend with an intense strawberry presence that is a result of a blend of 70% white beer and 30% fruit juice. The finish holds a mild vanilla-like aftertaste that is balanced by the faint sourness of the Belgian witbier base. The sweet dessertif liquid treat has won many awards internationally, and though it may not be the top choice of those who want a beer “to taste like a beer”, it is certainly wonderful marvel to behold. It is demonstratively sweet and fruity with much of the malt character overshadowed by the emboldened strawberry character. 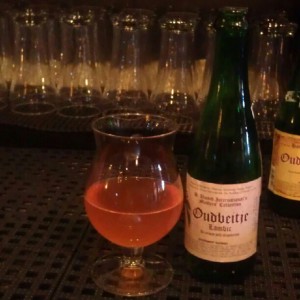 Hanssens Oudbeitje Lambic: While it is certainly not uncharacteristic for sour Lambic ales to utilize sweet fruits like cherries (Krieks) and raspberries (Framboise) to aid in the fermentation and balance of these bold blends, it is not often we see many of these beers using strawberries in the process. Hanssens Artisanaal of Dworp, Belgium has devised one of the most original craft beers of all in their Oudbeitje (Flemish meaning “old berry”). Old, pungent berries mixed with the spontaneously fermented young base brew and sit and mature over the winter months before a spring bottling. This secondary fermentation results in a quite flat beer with a pale golden hue (nothing like many other scarlet colored strawberry beers) and a distinctly horsey funkiness and sharp yet complex and lingering tartness. Oudbeitje is a rare treat and if you happen across one, or any of the goodly releases from this brewery, do yourself a favor and take your tastebuds on an adventure they won’t soon forget. 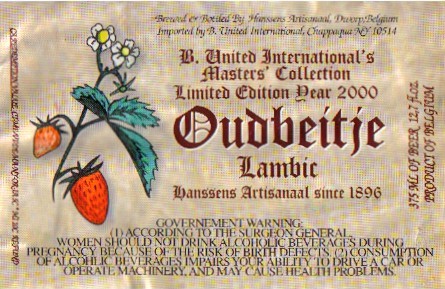 Laht Neppur Strawberry Cream Ale:  From Waitsburg, near Walla Walla, in the southeastern corner of Washington State, comes this summertime release from Laht Neppur Brewing. Found over the past years at the North American Organic Brewers Festival in Portland, OR, this somewhat unassuming brew holds a pale ale base with just a hint of sweet strawberries. Those who have enjoyed it seasonally near the brewery and special events will be happy to know that this year the brewery has released it in 22-ounce bottles as well. With a hazy orange-copper hue supporting a thick white head, this beer is a light 5.1% ABV with a low 20 IBU. In addition to the fruit, the addition of lactose lends its own smooth and sweet characteristics. The malt bill is simple and light, consisting of 2-Row Pale and Honey malt, and a single hop addition of East Kent Goldings that allows the fruit shine through. Fermented to a sweet finish, this one would make a great dessert, this beer works well as a stand alone or as a partner to a light dessert course. 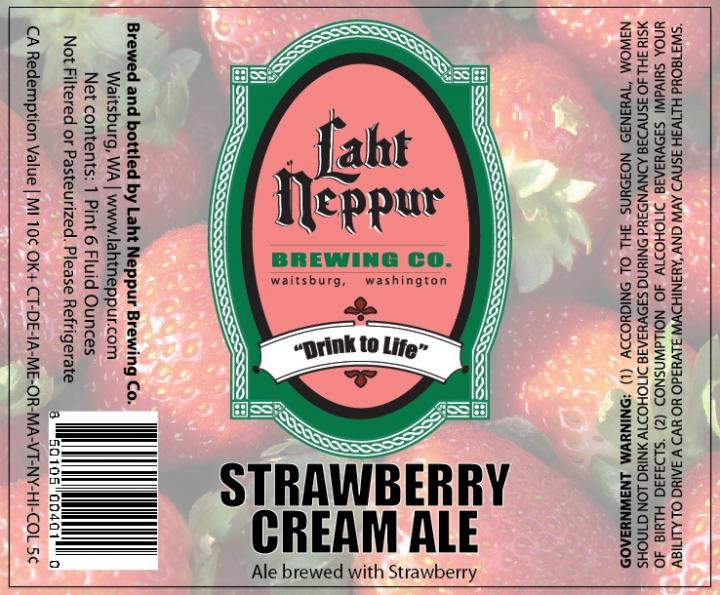 Mikkeller Spontanwildstrawberry: Another fruit Lambic-style ale, this spontaneously fermented and blended beer from Copenhagen,Denmark’s gypsy brewery Mikkeller, was brewed, like many of their products, at De Proefbrouwerij in Hijfte, Belgium. The brewery, who also produces cherry, raspberry, cranberry, grape, coffee, and gueuze Lambic-esque offerings, released this beer to the American market this summer in 375ml bottles with beautiful and artful labels. The beer itself is a 7.7% ABV funkbomb that pours a hazy pink-orange color with a wispy whitish head. Notes of burnt plastic and barnyard are all over this wild animal. Lots of vinegar and acetone dominate the finish of this polarizing brew. Not our favorite,but a worthy effort and an interesting exercise. The flavors of the white wine barrels used for aging shine through the beer, with bitter fruit skin, lime, and some harsh Brettanomyces notes. 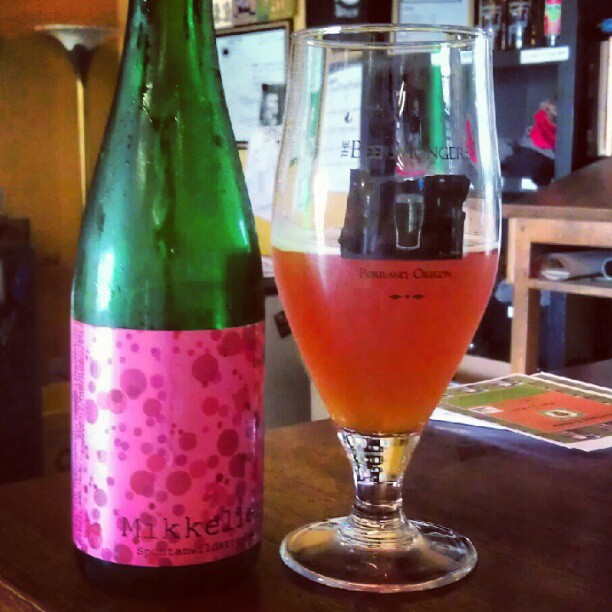 Samuel Smith’s Organic Strawberry Ale: Brewed at the Melbourn Bros Brewery in Stamford, England, then blended conditioned and packaged back at Samuel Smith’s Tadcaster brewery, this beer is certified organic by the USDA-accredited UK Soil Association. Some might consider the strawberry flavors to be soft and subtle, while to others, and in comparison to some of the other brews on this list, they may seem a bit bold.  To us the fruit absolutely wins over the malt character of the beer, but not as prominently as it does in Früli. Sweet, acidic, and with a fizzy mouthfeel, this brew is relatively well balanced with a lingering graininess. The brewery’s importer Merchant Du Vin suggests pairing the beer with roast spring lamb with orange-horseradish cream; Waldorf salad; and/or scones or fresh plump strawberries and cream. 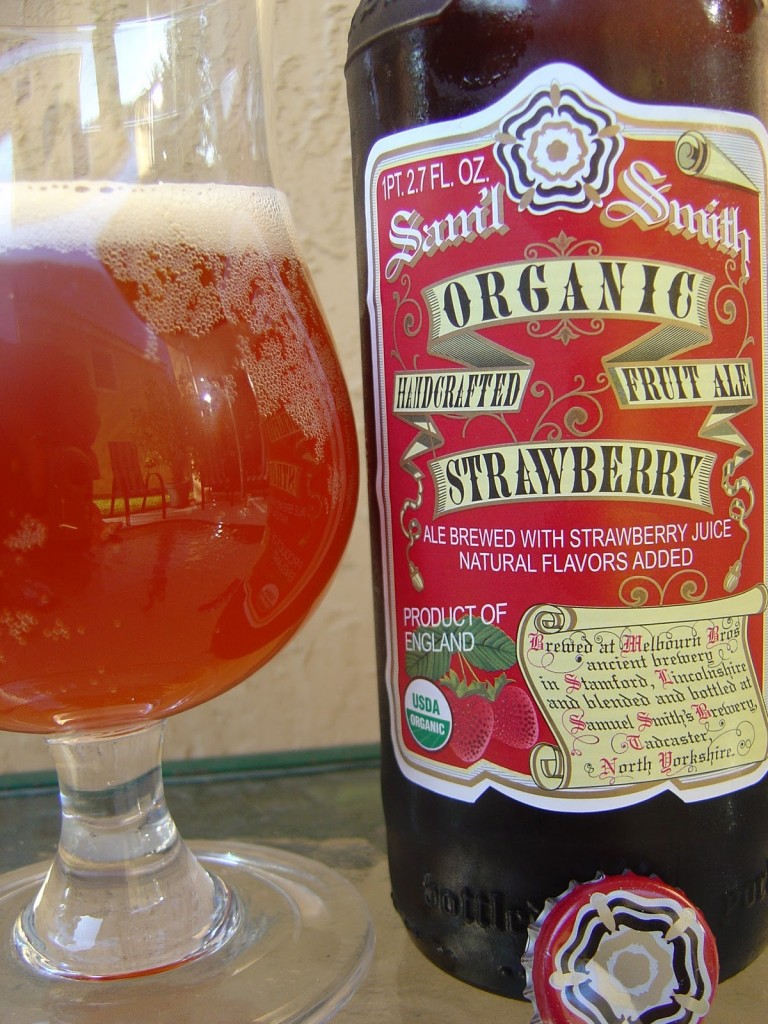 Dogfish Head Tweason’ale: It is no surprise to find a beer from Milton, Delaware’s Dogfish Head Craft Brewery that is far outside the bounds of what many imagine a traditional specimen to be. But even for Dogfish Head, their Tweason’ale presents one of their most unique and innovative offerings. This beer is a specialty grain offering suited for those who seek out a gluten-free alternative to the majority of options on the market. Release this year in the late winter/early spring, Tweason’ale builds from a sorghum base and adds a healthy quantity per serving of fresh locally grown strawberries from Fifer Orchards near Dover, DE. “For the sorghum,” says the brewery, “we sourced a dark, sweet, syrup with notes of molasses and pit-fruit.” Tweason’ale also features a pitchy buckwheat honey with what is described as “a beautiful hay-like, earthy-malty thing that we felt added the final touch to this Tweason’ale recipe.” The beer’s flavor profile finishes with the unmistakable sweet sorghum presence, yet it offers much more complexity than most sorghum and gluten-free brands on the market. 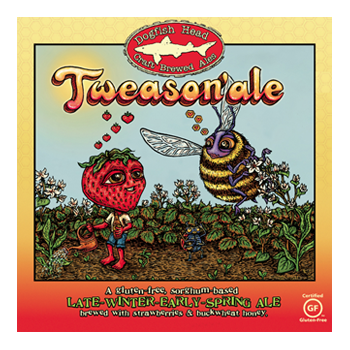 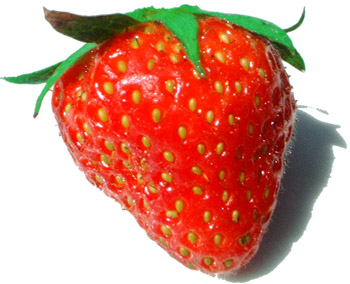 Certainly as craft beer continues to evolve and manifest itself in the minds and upon the palates of mainstream beer drinkers, we will begin to witness more and more examples of imaginative ingredient selection. Strawberry beer is one such example that may have started out, like many fruit beers, as a mere gimmick to lure those who don’t yet know they like beer, but with the examples above, it is clear to see that with many of these breweries, risk taking can lead to great reward, especially with something as majestic as strawberries that so deliciously symbolize the warm and wonderful spring and summer seasons.

Can’t get enough fruit? Check out our older post about banana beers here.