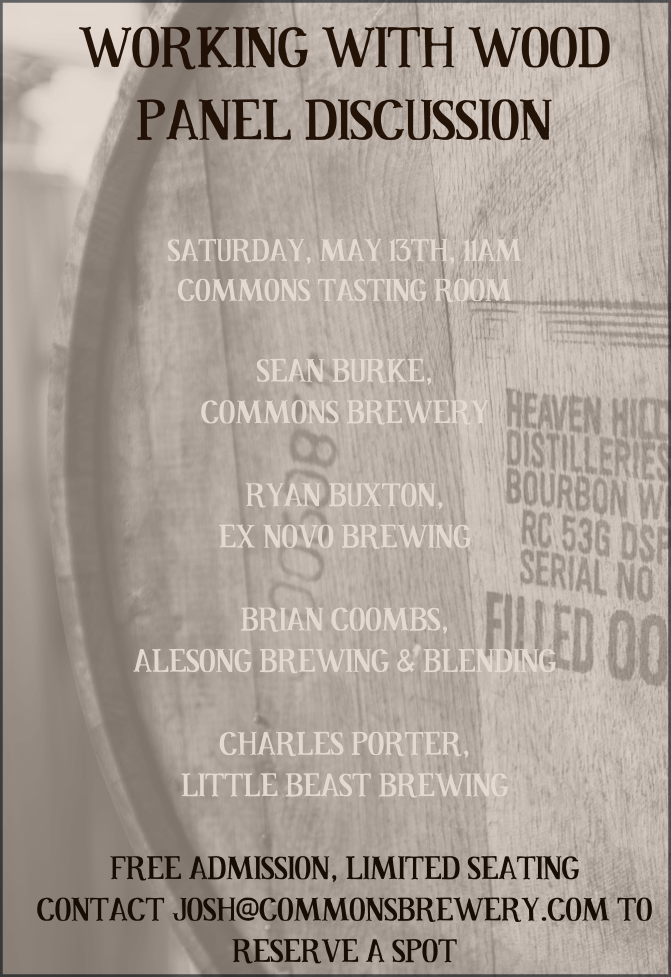 Ever wanted to learn more about what goes into the process of barrel-aging beer? On Saturday, May 13th The Commons Brewery will host Working With Wood, a panel discussion on barrel aging beers. Beginning at 11:00am this free seminar will go in depth on what it takes to produce world class barrel-aged beers from a few of Oregon’s brewers that have excelled at this art.

The panelists include Sean Burke from The Commons along with three of his contemporaries that includes Charles Porter from the recently launched Little Beast Brewing, Brian Coombs from Alesong Brewing and Blending and Ryan Buxton from Ex Novo Brewing.

Porter was a founder of Logsdon Farmhouse Ales and helped put this brewery on the map and he has now recently opened his new brewery Little Beast Brewing. Coombs earned a degree in chemistry from University of Oregon where he ended up working at Oakshire Brewing. He then moved on into the wine industry at King Estate prior to opening Alesong with his brother Doug and industry veteran Matt Van Wyk. Buxton is the newcomer to Portland when he took over the reigns from Jason Barbee at Ex Novo this past December. Prior to relocating to Portland Buxton held a variety of rolls at Epic Brewing including Head Blender, Head of Cellar, Manager of R&D and Lab Manager.

The seminar is free; just make sure to reserve your spot for Saturday’s seminar by emailing josh@commonsbrewery.com as space is limited!