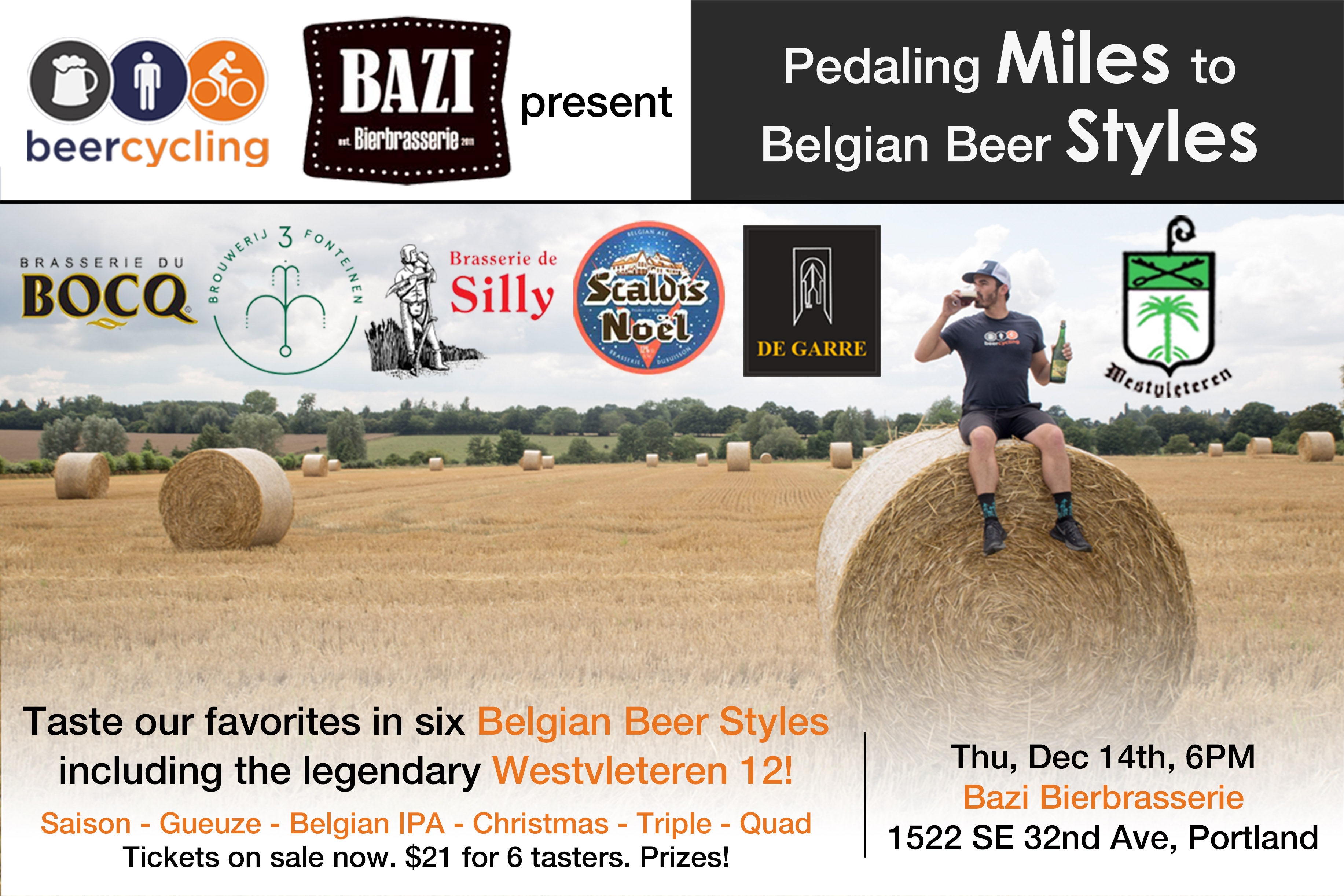 Taste some of our favorites in six Belgian Beer Styles including the legendary Westvleteren 12. Get ready to pedal miles through the following beer styles:

Drei Fonteinen Gueuze: 6% ABV, bright orange straw color, and fluffy white head. Lots of funk and wood on the nose. Tart, oak, and lemon on the palate, with a medium body mouthfeel.

Silly Green Killer IPA: 6.5% ABV, a well-hopped beer with quite a high rating on the bitterness scale. Its powerful aromas include touches of citrus and spice. In the rather dry finish, the malt comes to the fore beautifully.

Westvleteren 12: 10.2% ABV, a stunning and popular Belgian beer that has several times over been referred to as ‘the best beer in the world’ in the USA, the UK and Europe. Produced by Trappist monks in the grounds of the beautiful Saint Sixtus Abbey in the Vleteren region of Belgium, and since it first went on sale it has become one of the most sought after beers in the world thanks to the exceptional taste and outstanding quality. The Westvleteren beer has even stood up to review from the world’s most renowned beer critics, being labelled a beer of true quality and distinction.

Brasserie Dubuisson Scaldis Noel: 12% ABV, derives much of its rounded character from the use of roast caramel malts. The hops are carefully balanced with these, added in just the right proportions to develop its subtle hop aroma. There is also a robust fruity character, with the overall taste pleasingly consistent.

Tasting is limited to 40 participants and tickets may be purchased through Eventbrite. Cost is $21 (inclusive of gratuity) plus processing fees. Tasting includes 6 – 3 oz pours of each. Participants are welcomed to arrive any time between 6-9 PM.

Learn about Beercycling tours in Belgium and the newest Belgium/France Farmhouse experience. Evan will be onsite to answer questions, provide some firsthand insight into all these breweries, and give away some cool swag during the evening.

For more information about these and other events contact Bazi at 503.234.8888 or visit bazipdx.com

So, what is beercycling all about? Simply put, www.beercycling.com combines (in our opinion) the two greatest things on the planet: beer tasting and bicycle touring. Tours to vineyards have been popular for years, but brewery tours are becoming more and more common as well. This makes it easy for anyone to plan a trip to taste their favorites right from the source!

If Monks lived in Portland, this would be their watering hole. Bazi brings centuries of Belgian inspired beer and food under one roof plus a premium liquor selection. Explore with a nationally recognized Bier-Cocktail or simply sip on a glass of wine. As a Euro-centric establishment we embrace bringing community together through sports. We are an official Thorns, Timbers, Liverpool FC and American Outlaws partner, and showcase these and other events on our 114″ HDTV with surround sound. Named “No 1 Soccer Pub” by The Oregonian 2016, “Top 100 Beer Bars in America” by DRAFT Magazine 2014, 1015, 2016 and “Top 10 Best Beer Bars in Portland” by The Oregonian, 2014. Located in the heart of the Hawthorne District, tucked away just off of SE 32nd Avenue.