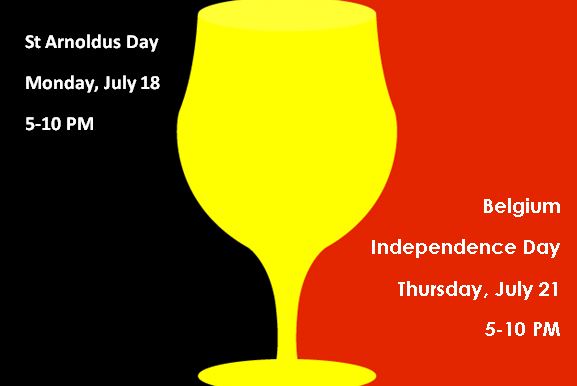 St Arnoldus Day
Monday, July 18 from 5-9 PM
Every July 18, the Belgians honor Saint Arnoldus with a feast in Brussels. He’s most famous for urging his congregation to “Drink Beer, Not Water” during a plague epidemic. Because beer is sterilized in production and the local water was the source of the sickness, people were saved. A true miracle!  A special tasting tray featuring Koningshoeven La Trappe Bockbier, Bosteels Tripel Karmeliet, St Feuillien Blonde, and Bockor Cuvee des Jacobin Rouge will be available for $12 (4 – 5 oz pours).   Attendees who purchase the tasting tray will receive raffle tickets for swag giveaways taking place during the evening included St Arnoldus t-shirts, bottle openers, and more (while supplies last).

Belgium Independence Day
Thursday, July 21 from 5-9 PM
Celebrate Belgium Independence Day with a featured Brasserie Dupont tasting tray featuring the Classic Dupont, Avec Les Bon Vous, and Duex Amix (collaboration with The Lost Abbey) for $9 (3 – 5 oz pours of each).  Commemorate when the Belgians said “enough” to the Dutch. Enough with the wooden shoes. Enough tulips. And they celebrated their independence by doing what they do better than anyone – they had a beer festival.  T-shirts, key chains and other cool swag will be given away during the course of the evening.

If Monks lived in Portland, this would be their watering hole. Bazi brings centuries of Belgian inspired beer and food under one roof plus a premium liquor selection. Explore with a nationally recognized Bier-Cocktail or simply sip on a glass of wine. As a Euro-centric establishment we embrace bringing community together through sports. We are an official Thorns, Timbers and American Outlaws partner and showcase these and other events on our 114″ HDTV with surround sound. Named “No 1 Soccer Pub” by The Oregonian 2016, “Top 100 Beer Bars in America” by DRAFT Magazine 2014, 1015, 2016 and “Top 10 Best Beer Bars in Portland” by The Oregonian. Located in the heart of the Hawthorne District, tucked away just off of SE 32nd Avenue.