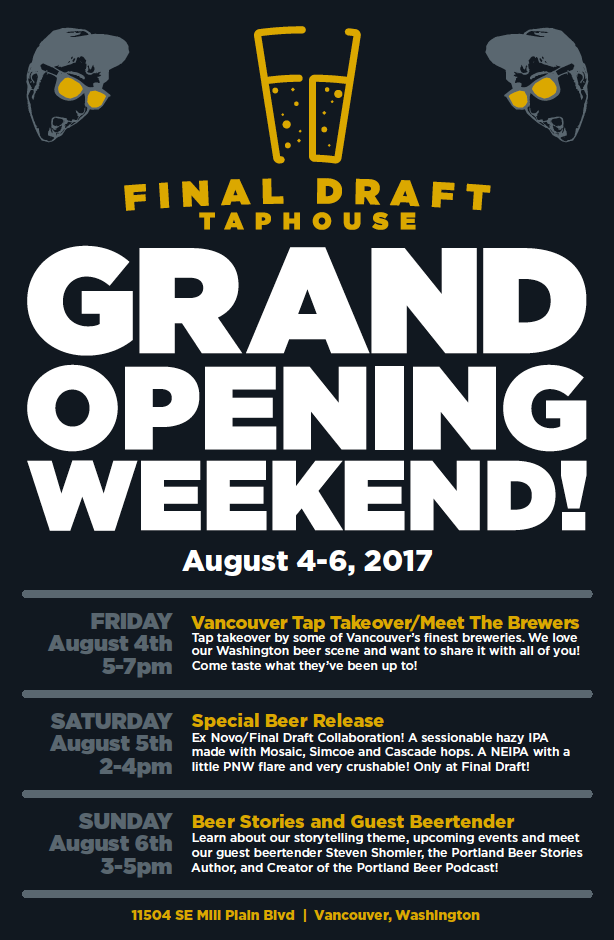 Located just east of I-205 on the northside of SE Mill Plain Boulevard, Final Draft Taphouse is the concept that came from owners Kimberly Johnson and Mike Bolt. Both were looking at a new avenue to continue their careers in the craft brewing industry and decided to open a beercentric bar. With 30 rotating beers, ciders and wine on tap (a list can be found here) there is always something on tap for every palate.

For its Grand Opening Weekend, Final Draft Taphouse has three days of events planned beginning with today’s Vancouver Tap Takeover and Meet the Brewers event. This big night will be followed up on Saturday with the exclusive release from its collaboration with Ex Novo Brewing, Kimberly’s former employer that is described as a New England-Style IPA. To close out the weekend local writer Steven Shomler will tend bar. Full details on all of the events are listed below.

Grand Opening – Vancouver Tap Takeover & Meet the Brewers
Friday, August 4th – 5:00-7:00pm
Tap takeover by some of Vancouver’s finest breweries. Here’s a list of featured beers that will be on draft.

Final Draft Taphouse will have fun giveaways and GrowlerWerks will be demonstrating its uKeg.

Grand Opening – Ex Novo/Final Draft Collaboration Beer Release
Saturday, August 5th – 2:00-4:00pm
Final Draft Taphouse collaborated with Ex Novo Brewing, where Kimberly’s started her craft-beer industry journey, and brewed a beer with them. This collaboration beer is a sessionable, hazy New England-Styel IPA made with Mosaic and Simcoe hops, and dry-hopped with even more Mosaic, Simcoe, and a little Cascade hops. Come and get it first at the taphouse!

Grand Opening – Guest Beertender & Stories Events Preview
Sunday, August 6th – 3:00-5:00pm
Meet Guest Beertender Steven Shomler, author of Portland Beer Stories. Steven will be giving away two of his books, have more available for sale, and we bet he will sign one for you.
This day will also be about the taproom’s storytelling theme and get a preview of its first storytelling event, Snaps & Taps. Sports and Wedding photographer Jeff Hinds will be at the taphouse to show you just a little about what Final Draft will be offering in its new Snaps & Taps event.