McMenamins brewers and management once again convened for their annual long lunch at the Hillsdale Pub as they celebrated each of the many beers, wines, whiskeys and more that will be added in trace amounts to this year’s McMenamins anniversary brew for the party June 18 at McMenamins first pub, the Barley Mill. As tradition dictated, folks gathered at the Barley Mill in the morning to grind the grain for the beer, as all early McMenamins brewers once had to do when the Barley Mill’s machine — a re-purposed kitty litter mill, we might remember —  was the only one available.

The group of 30 or so, including McMenamins alumnus brewer Jason McAdam (John Harris was supposed to be there also, but got caught in Seattle Beer Week events) then repaired to the Hillsdale Pub and sat down at tables to listen to McMenamins history, sing songs, mourned the absence of the late Fred Eckhardt, read passages from books and sampled quaffs that ranged from the sublime to — well, brewer Graham Brogan brought ANOTHER of his apparently endless supply of 30-year-old Cascade stubbys…let’s just say that it was a cheap beer to begin with and 30 years have done it no favors. The event itself is a great one — truly a family affair and a reminder that McMenamins is all about community and history — bless ’em!

The first Kettle Sour Fest and other beer events for the week of May 20-26.

“Purple Rain” Singalong
8-10 PM Friday May 20, Bazi Bierbrasserie, 1522 SE 32nd Ave.;
Join Erin of Ecliptic Brewing at for a “Purple Rain” singalong before a screening of Prince’s much-loved movie of the same name. Prior to the start of the movie Erin will lead us in a complimentary toast to honor Prince’s career with Ecliptic’s purple beer – Callisto Tripel with Blackcurrants, named after the outermost of Jupiter’s four Galilean moons, and the most heavily cratered object in our solar system. This golden Belgian ale features traditional flavors of a sweet tripel with the addition of tart blackcurrants. Song sheets will provided and movie theme cocktails will be on special.

Prizes will be given to the winning team, and Best Costume. Both prizes, along with a Best Hole award for the brewery with the most creative hole, will be announced at 7 p.m. at Columbia River Brewing’s Taphouse.

Kettle Sour Fest
11 a.m. – 9 p.m. Saturday May 21, Stickmen Brewing Co., 40 N. State Street, Lake Oswego; Free admission, $20 for glass and 10 tix, all ages, 21 and older to drink, proper ID required. $40 VIP packages available.
This first-time event features kettle soured beers from beers from some amazing breweries. The process is a relatively new way to make lacto-fermented clean, tangy sour beers and has been championed by Portland brewers at Breakside, Gigantic, the Commons, Burnside and others. (Check out Ezra’s excellent explanatory piece on kettle souring posted last year on The New School.) Proceeds from the fest benefit the Friends of Doernbecher. The event will be held on the lakeside patio and a special selection of sour beer friendly food will be available. 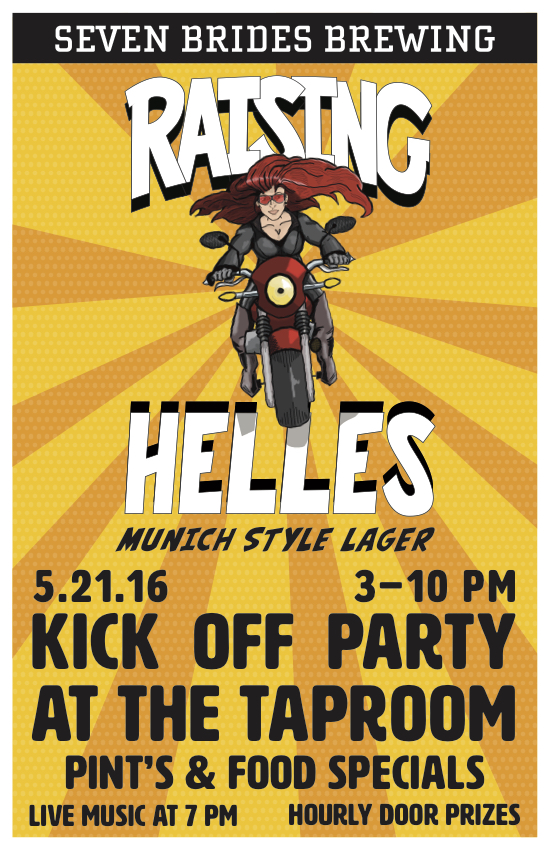 Seven Brides Munich Lager Release
3-10 p.m. Saturday May 21 Seven Brides Tap Room, 990 N. First St., Silverton;
Seven Brides Brewing co-owner Jeff DeSantis was impressed with the traditional Munich Helles that he recently sampled on a trip to Germany. “There was something special about that Helles,” says DeSantis in the press release. “It was complex in flavor, but still easy to drink. I knew it would be a perfect spring and summer seasonal beer.” Yet creating the perfect balance of flavors wasn’t easy in a light, eminently drinkable beer. As brewers know, there’s nothing to hide behind in a deceptively simple beer such as a helles lager, but they apparently they hit the mark with Raising Helles, and are celebrating with a party that includes live music, pint and food specials as well as hourly prizes, including dinner for two, free growler fills and cases of Raising Helles.