Fort George turns 10 years old, Bazi welcomes in spring with saisons and the rest of your beer events for the week of March 9th.

Beer Collectibles Swap Meet
9 a.m.- 2 p.m. Saturday Mar.11, VFW Hall, 7118 S.E. Fern St.; free admission.
Here’s your introduction to the fascinating world of breweriana – beer collectibles. We concern ourselves with the recent history of beer, but it’s always been the most popular of beverages and there’s a fascinating array of old literature, posters, cans, bottles, glasses, and advertising trinkets avidly sought after by collectors – who, by the way, are as friendly and welcoming a group as you could ever hope to find. 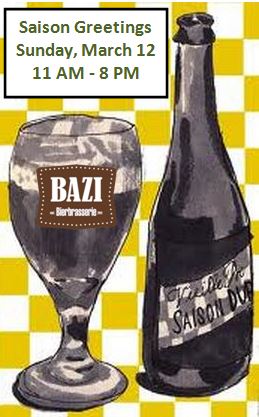 Upright Vert (Oregon): 4.75 percent ABV, wheat based brew using sun dried black limes that contribute not only an attractive flavor of citrus but also a depth that when combined with the open fermentation method and saison strains, results in a complex profile.

Saison Dupont Cuvee Dry Hopping (Belgium): 6.5 percent ABV, the special feature of this beer, which is produced in limited quantities, is that the hops used for the “dry hopping” are different every year. This year, three distinctive hop varieties were selected. For the dry hopping, brews were made from the “Brewers Gold” variety, grown in Germany. The result is a coppery, blond beer, dry and refreshing with sustained bitterness.