No-Li Brewhouse will be joining forces at the Fifteenth Ave Hophouse to be the establishment’s Brewery of the Month throughout the month of May. Then this honor culminates at the end of the month with Gestation and Fermentation. This Beer Dinner will feature four courses paired with four No-Li beers and will take place on Wednesday, May 27th, from 5:00 to 8:00pm.

Cost for the four-course meal and four, eight ounce beer pairings is $25 pre-sale and $30 the day of the event. Tickets available at Fifteenth Ave Hophouse. Courses include a soup starter, grilled fruit as an appetizer, a braised meat entrée, and desert. With a dish matching the Poser Pale Ale, Crony NW Brown Ale, Brass Monkey Citrus Pale, and Rise and Grind Coffee Stout, a palate extravaganza awaits.

Additionally, a tasting of the four No-Li brews will be available during the hours of the dinner, as well a swag giveaway for drinkers of No-Li. 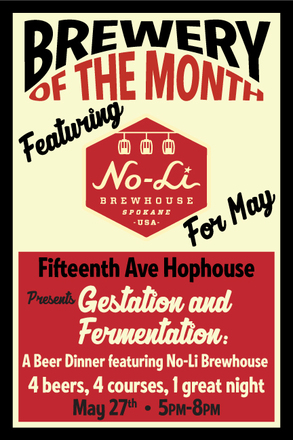