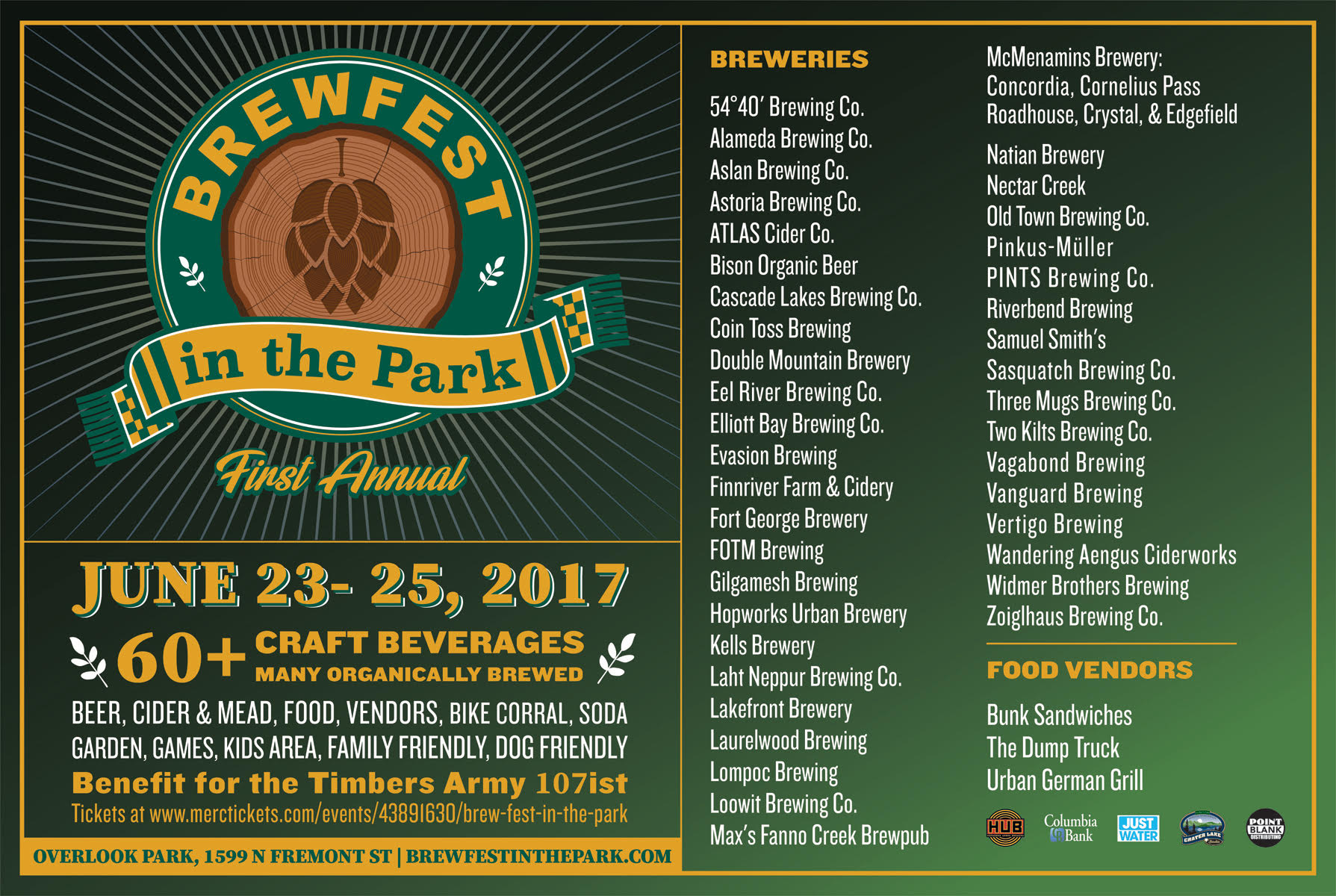 The new BrewFest in the Park debuts today, Friday, June 23rd at Noon and runs through Sunday, June 25th at 5:00pm at Portland’s scenic Overlook Park. Festival hours are Noon to 9pm Friday and Saturday and Noon to 5pm Sunday.

A few months back we reported about the inaugural Organic Craft BrewFest that was going to fill the one year void of the (North American) Organic Beer Fest that according to its website is “taking a year off and putting together great things for the fest in 2018.” However the two events had similar names and to avoid confusion with the Organic Beer Fest, this new fest for 2017 rebranded itself to BrewFest in the Park.

BrewFest in the Park will serve more than 60 beers, ciders and meads that take on a more organic focus. The organically brewed styles at the event range from ciders to cream ales, ambers to lagers, and fruit beers to IPAs. All the products have been brewed using a minimum of 70% organic ingredients, per USDA guidelines. Some are certified organic, while most are one-off products made with organic ingredients. A list of participating breweries, its beers and the organic status can be viewed on the website at http://BrewfestinthePark.com/participating-breweries.

Designated drivers may purchase a ticket for $5 at the door, which includes handcrafted Crater Lake Soda and a bottle of water; designated drivers are not allowed to consume any alcohol. Minors under the age of 21 receive free admission, but must be accompanied by a parent. Leashed dogs accompanied by responsible owners are welcome.

Most products cost one ticket for a taste and four tickets for a full mug. Select products, including some beers and most meads and ciders, will cost extra tickets. Additional drink tickets are available at the festival for $1 apiece.

In addition to the beers that will be pouring, there will also be food carts, vendors, the Crater Lake Soda Garden for minors and designated drivers, games for adults, and a children’s area with face painting and activities – all taking place in a beautiful park setting.

Arriving at BrewFest in the Park is easy by taking the MAX Yellow Line to the Overlook Park Station as it is adjacent to the festival. Attendees can also take advantage of the Hopworks Urban Brewery Bike Corral, where volunteers watch over bikes for free. Patrons receive an extra ticket with a validated Tri-Met ticket or a ticket from the Hopworks Bike Corral (only one extra ticket per person).

BrewFest in the Park benefits the Timbers Army 107IST (Independent Supporters Trust), whose mission is to support soccer in and around Portland, Oregon, from the grassroots to the highest professional level. The 107IST is a member-based non-profit organization open to anyone who loves soccer, the Timbers/Thorns, and Portland.