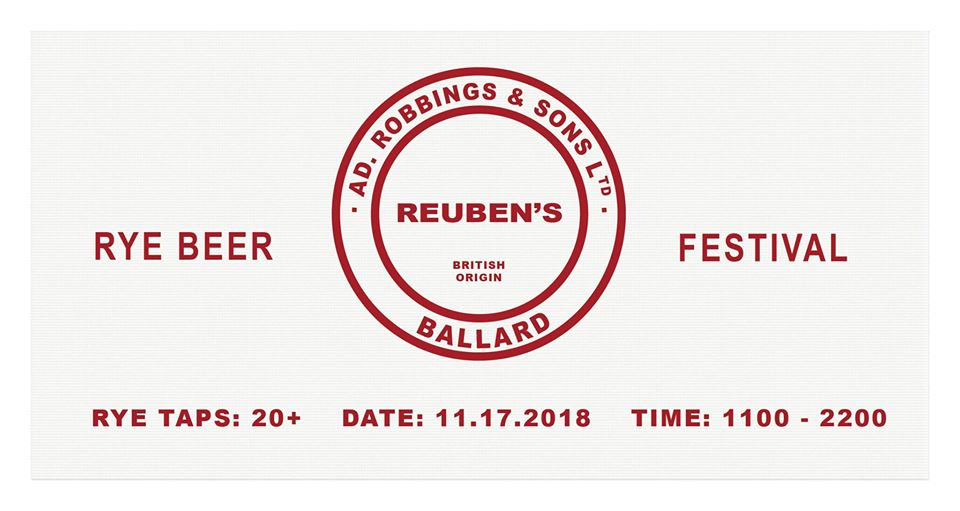 Since its humble beginnings in 2012, Reuben’s Brews has been a proponent of utilizing rye malt in its beers. Now six years later the Seattle based brewery continues this exploration with rye malt as it hosts its 6th Annual Rye Beer Festival.

On Saturday, November 17th, Reuben’s Brews presents its 2018 Rye Beer Festival from 11:00am-10:00pm at its brewery in Seattle’s Ballard neighborhood. The tap list for the daylong festival will feature 20 rye beers including some favorites such as Roggenbier, American Brown, American Rye, Yirgacheffe Rye, and Rye Crush.

Here’s a preview of the rye beers that will be pouring on Saturday.

6th Annual Rye Beer Festival Tap List:
Rustic Saison (6.4%, 28 IBU) – This recipe originated from a pro-am recipe that we later developed to work well in our sour program. The malts include rye, oats, and wheat. The spiciness from the rye works well with the spicy ester profile of the saison yeast strain we use. The oats also add a nice mouthfeel as well.

Brettania – Guava (6.3%) – A rustic saison aged for a number of months in oak puncheons with our house mixed brettanomyces culture. The beer was then aged on top of of large amount of fruit for at least three months, and then refermented in the bottle. This series explores a multitude of our favorite fruits.

Brettania – Boysenberry & Blackberry (6.3%) – A rustic saison aged for a number of months in oak puncheons with our house mixed brettanomyces culture. The beer was then aged on top of of large amount of fruit for at least three months, and then refermented in the bottle. This series explores a multitude of our favorite fruits.

American Rye (5.4%, 32 IBU) – The first beer brewed on the 5BBL system at our original brewery, our first ever batch of American Rye won “Best New Local Brew” in Seattle Magazine’s 2012 Best of List. A clean, crisp and refreshing rye-based brew. Light in color, this brew has an aroma of citrus and tangerine and is complimented by a smooth body and a crisp finish.

Yirgacheffe Rye – American Rye with Yirgacheffe coffee from our friends at Kuma Coffee.

Roggenbier (5.3%, 19 IBU) – Roggenbier (German for rye beer) is a historic northern German style of beer. Ours is, simply put, a rye hefeweizen. Aroma of rye, banana, and clove make way to a medium body with rye spice finish. One of the beers that launched Reuben’s Brews in 2012, and one of the first beers we ever bottled.

American Brown (5.9%, 36 IBU) – The American Brown is a malty, hoppy brown ale. Bright citrus hops lead the aroma with a little roast in the background. Chocolate and caramel come through with a slight smokiness. Has a medium full body with a relatively dry, slightly spicy finish.

Crush ALS (6.0%, 50 IBU) – Our latest hazy IPA from the Crush series. Malt bill includes flaked rye. Dry-hopped with the 2018 Ales for ALS hop blend from Loftus Ranches and YCH Hops in the Yakima Valley. $1 per pint is donated to the ALS Therapy Development Institute.

Rye Crush (6.0%, 50 IBU) – We added some flaked rye into the Crush recipe to provide body and spice complexity to the malt profile. This batch, like the original released in 2017, is dry hopped with Kohatu, Citra and Ekuanot hops to give this brew a big tropical fruit profile on top of a soft, pillowy body. This tasty brew comes in at 6% ABV, and 50 IBUs.

Roasted Rye (7.0%, 80+ IBU) – Our winter warmer IPA. Citrus and tangerine in the nose, supported by chocolate, roast and caramel notes from the malts. The best of an India Pale Ale and a winter warmer wrapped into one brew. This was the beer that started it for us back in 2010 as homebrewers.

INK (8.1%, 80+ IBU) – Imperial Black IPA. A bold citrus and floral hop profile sits on top of a moderate roasted malt and caramel nose. A medium mouthfeel and balanced bitterness in the finish. Oh, and true to form we used a little rye in the brew – it’s rude not to.

Three Ryes Men (12.2%) – Three Ryes Men is a barley wine with three different types of rye, aged in a blend of rye whiskey and bourbon barrels. A perfect sipper for the dark winter nights.

Entry into the 2018 Rye Beer Festival is free!