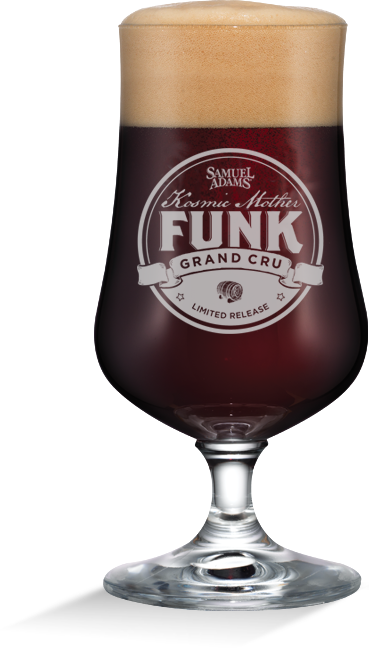 Last year Samuel Adams released Kosmic Mother Funk (KMF) Grand Cru, a fine tasting Belgian-style wild ale that is part of the Samuel Adams Barrel Room Collection. Well another year later and the brewery is set to release this beer that ages on Hungarian Oak for 12 months once again in its elegant 750mL cork finished bottles. On top of this, Samuel Adams will be traveling to 20 cities across the United States from September 14 through December 6. After skipping Portland, Oregon last year, Samuel Adams will be making a stop here when the KMF Tasting Tour visits the Pacific Northwest with stops in Portland and Seattle, Washington from October 5 – 11. Once we receive more specifics on these stops we will bring this news to you.

BOSTON, September 1, 2015–The brewers at Sam Adams announced today that they will be taking their special limited-release Belgian style ale, Kosmic Mother Funk (KMF) Grand Cru, on a second annual Tasting Tour across the country. This batch of KMF Grand Cru will be poured at a limited number of bars and restaurants in 20 cities, with the final stop on the tour determined by drinkers who will vote for their city online.

The Kosmic Mother Funk recipe was inspired by the Belgians, known for unique beer styles and brewing techniques including blending, aging and conditioning beers that deliver wild and flavorful results. The Samuel Adams brewers began by taking a Belgian ale and aging it in Hungarian oak tuns where it evolved and took on a life and character of its own over time.  Aged for up to a year, the long contact with the wood allows air to slowly seep into the beer during secondary fermentation, smoothing out any harsh flavors. Wild yeast and bacteria including Brettanomyces and Lactobacillus also interact with the beer, imparting unique spicy, fruity and bright tart flavors. This distinctive beer was then blended at varying levels into a series of Belgian brews, the manifestation of which became the Samuel Adams Barrel Room Collection.

Originally a French term used to describe wine vintages, when used in the context of beer, ‘Grand Cru’ has come to denote a brew that is the ‘best of the best.’ When crafting Kosmic Mother Funk Grand Cru, the brewers at Samuel Adams aimed to create a unique beer unlike anything they had barrel-aged before.  At 6.5% ABV, KMF Grand Cru is a wild, funky and complex ale aged for just over a year, with a depth of flavors ranging from earthy and spicy to floral and sweet.

“Craft beer drinkers are adventurous and opening their palates to new and interesting flavors,” said Samuel Adams Brewer and Founder Jim Koch. “Kosmic Mother Funk Grand Cru isn’t for everyone, but those who enjoy it appreciate the depth and complexity that make it one of the most unique beers we’ve ever crafted, only to be described as a kosmic collection of flavors.”

To kick off the 2015 KMF Grand Cru Tasting Tour, Jim Koch will tap the first keg during a special event at the Boston Brewery on September 2nd where a very limited number of bottles will be available for sale. Tickets for the event at the brewery can be purchased at https://kmfbostonlaunch2015.eventbrite.com.

Kosmic Mother Funk Grand Cru 20-City Tasting Tour – #KMFtour
Following the official release of KMF Grand Cru at the Boston Brewery on September 2nd, the KMF Grand Cru Tasting Tour will visit 20 cities from September through December. The brew will be available on draft only in a limited number of bars and restaurants throughout each city, and the final tour stop will be voted on by craft beer lovers across the country. In 2014, Kansas City had the most votes and was the “Drinker’s Choice” final stop of the tour.

For tour dates and to vote for your city as the final stop, visit www.SamuelAdams.com/kmf.

ABOUT SAMUEL ADAMS AND THE BOSTON BEER COMPANY
The Boston Beer Company began in 1984 with a generations-old family recipe that Founder and Brewer Jim Koch uncovered in his father’s attic. Inspired and unafraid to challenge conventional thinking about beer, Jim brought the recipe to life in his kitchen. Pleased with the results of his work, Jim decided to sample his beer with bars in Boston in the hopes that drinkers would appreciate the complex, full-flavored beer he brewed fresh in America. That beer was aptly named Samuel Adams Boston Lager, in recognition of one of our nation’s great founding fathers, a man of independent mind and spirit. Little did Jim know at the time, Samuel Adams Boston Lager would soon become a catalyst of the American craft beer revolution.

Today, The Boston Beer Company brews more than 60 styles of beer. It relentlessly pursues the development of new styles and the perfection of classic beers by searching the world for the finest ingredients. Using the traditional four vessel brewing process, the Company often takes extra steps like dry-hopping, barrel-aging and a secondary fermentation known as krausening. The Company has also pioneered another revolution, the ‘extreme beer’ movement, where it seeks to challenge drinker’s perceptions of what beer can be. The Boston Beer Company has been committed to elevating the image of American craft beer by entering festivals and competitions around the globe, and is one of world’s most awarded breweries at international beer competitions. As an independent company, brewing quality beer remains its primary focus. Although Samuel Adams beer is America’s leading craft beer, it accounts for only one percent of the U.S. beer market. The Boston Beer Company will continue its independently-minded quest to brew great beer and to advocate for the growth of craft beer across America. For more information, please visit www.samueladams.com.