As the news swept through the entire beer community a week ago on Fred Eckhardt’s passing just three months since turning the age of 89, there will now be an official event to celebrate the life of Fred. On Sunday, August 23rd McMenamins and Hair of the Dog will present Celebrating The Life of Fred Eckhardt held at McMenamins Crystal Ballroom from 2:00 to 6:00pm. Many of details are currently being worked out and organizers desperately need your photos of Fred to be shown at the Celebration. Photos of Fred can be emailed to past@mcmenamins.com

Fred began writing about beer when the landscape was full of industrial lagers. In 1969 he wrote his first book on beer, A Treatise on Lager Beers. Then his Essentials of Beer Styles was first printed in 1989 and Sake (USA) followed in 1992. Fred also wrote beer columns for The Seattle Times and then The Oregonian along with a handful of other publications including All About Beer magazine.

One of our local breweries that honored Fred is Hair of the Dog Brewing. Throughout the years beginning in 1997 Alan Sprints, owner and brewer at Hair of the Dog, brewed many beers in honor of our local treasure including his namesake, Fred, along with limited releases including Little Dog Fred, Fred From The Wood, Bourbon Fred From The Wood and Otto. Some may not realize that Fred’s full name was Otto Frederick Eckhardt, hence the rare beer named Otto. 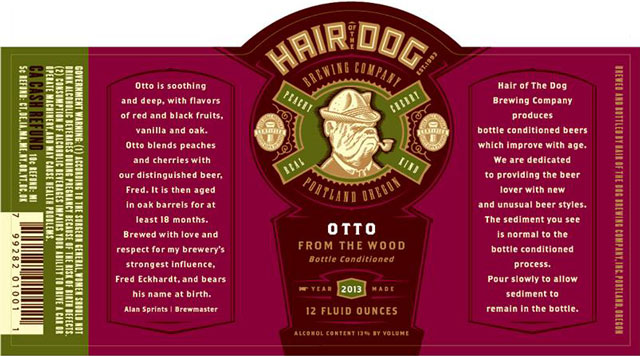 Sprints states, “Fred was created to honor beer writer and historian Fred Eckhardt. Fred is a big inspiration for me and many other brewers. Fred’s work in all-grain brewing and beer styles helped me become a better brewer”.

The event on Sunday, Celebrating The Life of Fred Eckhardt, will take place at the Crystal Ballroom and hosted by an Oregon brewing pioneer Brian McMenamin and one of the best beer writers in Portland and beyond, John Foyston.

During this event friends of Fred will be sharing stories on how he influenced their lives and what we now see in the modern craft beer movement. The event will feature beers from Hair of the Dog and McMenamins with all proceeds going to the Michael Olsen fund. Mikey was an employee at Hair of the Dog who was shot and killed on the streets of Portland last year in an unnecessary act of random violence. In his honor, Hair of the Dog is building a fund to help pay for scholarships to summer camps at the Oregon Zoo. Hair of the Dog will be pouring Fred and Blue Dot IPA and McMenamins Crystal Brewery will have its Bavarian-style Hefeweizen all at a very reasonable price and the comfort of know that the with each beer the memory of Fred and Mikey will still live on.

So lets all raise a pint to Fred and all he did throughout his life defending our country as a Marine and his early writings on the craft beer movement. Remember as Fred always said, “Listen to your beer”!