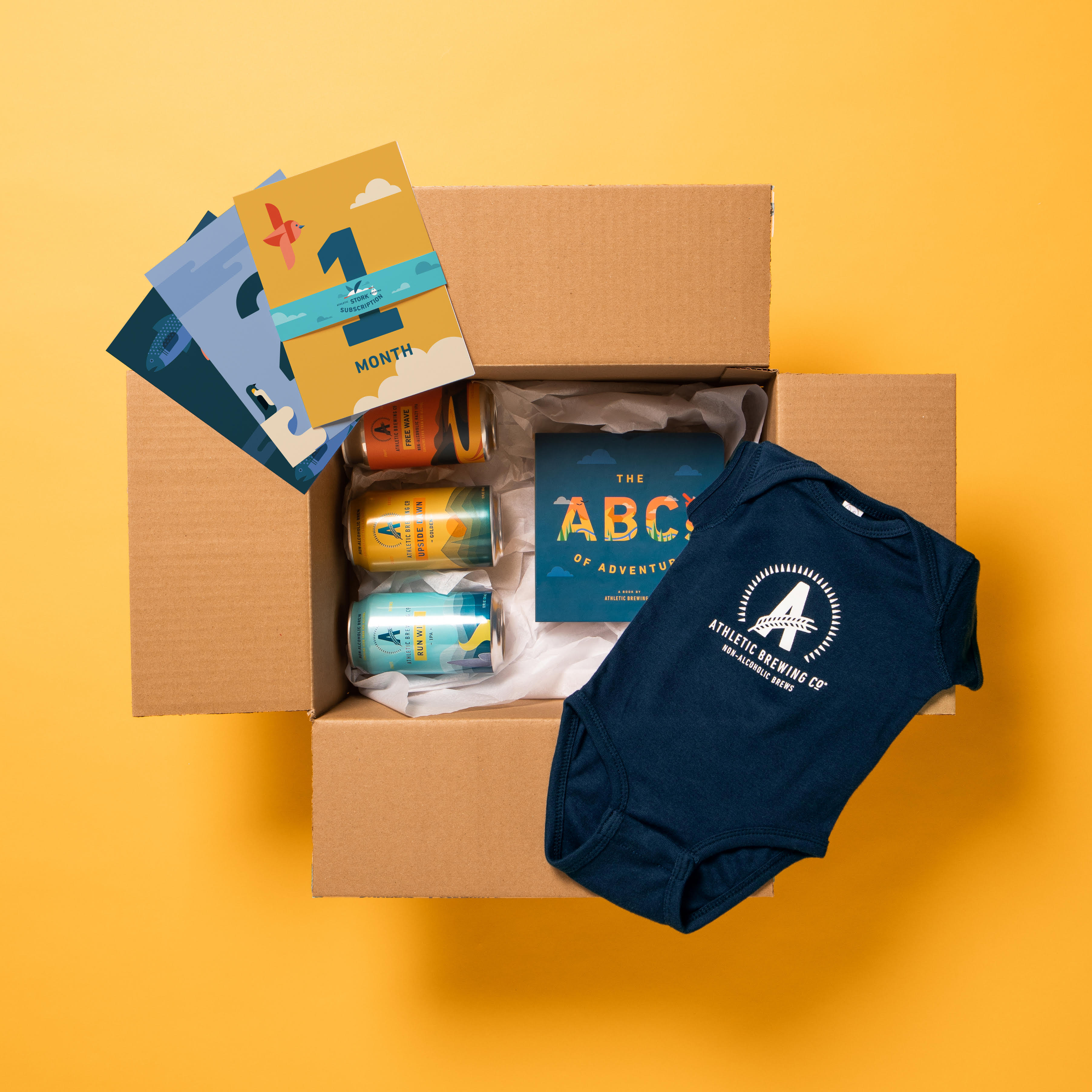 STRATFORD, CT AND SAN DIEGO, CA (Sept, 2021) – A visit from The Stork always brings a bundle of joy. The Stork Subscription, a new offering from Athletic Brewing Company, will soon bring joy to thirsty new parents via monthly shipments of delicious, non-alcoholic craft beer delivered directly to their doors.

When those late nights and early mornings are necessary — and they will be — expecting or new parents want a clear head. But they might still want a cold one, and with the soon-to-be-launched Stork Subscription, they’ll receive one six-pack every month, for nine months. The box will contain one of three of Athletic’s flagship brews: Run Wild IPA, Upside Dawn Golden Ale, and Free Wave Hazy IPA.

Along with the monthly delivery, parents will receive gifts for their new pint-sized person. In the first box, they’ll receive a branded onesie, to get the new baby ready for their upcoming outdoor adventures, and 12 milestone cards, designed to track progress, photograph, and create family memories.

The new parents will also receive an exclusive ‘ABC of Adventures’ baby book, a custom-illustrated creation inspired by Athletic’s own family adventures, detailing their favorite ways to get outside and enjoy the outdoors together.

“Since we started the brewery, we’ve challenged ourselves to grow with our drinkers,” said Athletic Co-Founder Bill Shufelt. “And as our community evolves, we do, too.” Bill, who will become a new parent himself this summer, is excited to share Athletic with new drinkers everywhere, some who thought they might have to give up beer altogether as they became parents. “Living a healthy and happy life and enjoying great beer shouldn’t be a struggle. The Stork Subscription is a fun initiative to help out drinkers who are also becoming parents. New parents will no longer have to give up their love of craft beer or socializing. The Stork Subscription will help them balance parenting without compromise.”

Always focused on its founding mission of offering healthy, enjoyable non-alcoholic craft beers, Athletic knows that very few pursuits are more active or more demanding than being a new parent. And, as every new parent knows, it’s tiring enough looking after the little one without the lethargy and fuzzy head that comes with alcoholic drinks.

Athletic, the nation’s leading brewer of non-alcoholic craft beers with over 50 percent market share, wants to give new parents a way to continue enjoying beer while not sacrificing their new duties as parents. Know some new or expecting parents? Drinkers can purchase The Stork Subscription for themselves or as a gift beginning September 15th, via AthleticBrewing.com for $199, and have their first box delivered to their doorstep in only a few days.

At 50 – 80 calories, the three flagships included with Stork are award-winning examples of Athletic’s unique variety of styles in the nonalcoholic space. Free Wave Hazy IPA, for example, was named Supreme Beer of the Competition (alcoholic and nonalcoholic) and Best No & Low Alcohol Beer by the International Beer Challenge (IBC) 2020 and won a Gold Medal at the 2019 U.S. Open Beer Championship. Loaded with Amarillo, Citra, and Mosaic hops, it is a medium-bodied IPA and features a softer and simpler cloudy wheat body with notes of orange blossoms, citrus, and wheat.

Named Best of Craft Beers and gold winner at the U.S. Open Beer Championship, Run Wild is the ultimate sessionable IPA for craft beer lovers. Brewed with a blend of five Northwest hops, it has an approachable bitterness to balance the specialty malt body.

And Upside Dawn Golden Ale, is a refreshing, light-bodied beer brewed with premium Vienna Malt along with a combination of English and traditional American hops. Clean and balanced, it has floral and earthy notes, and a citrusy character. In 2020, Upside Dawn took home the Silver Medal at the Best Craft Beer Awards.

About Athletic Brewing
International Beer Challenge 2020 “Brewer of the Year North America,” Athletic Brewing Company is reimagining beer for the modern, active adult. Their great-tasting brews let you enjoy the refreshing taste of craft beer, without the alcohol or the hangover. You can enjoy them anytime, anywhere, and still be healthy, active, and at your best; it’s the very reason they started brewing them in the first place. With custom breweries on the East and West coasts, their lineup has earned accolades throughout the industry, even against full-strength beers, including the 2020 World Beer Award Gold medal for Run Wild. To top it all off, as part of the Athletic Brewing “Two for the Trails” initiative, 2% of all sales are donated to causes and organizations that support healthy, outdoor, active living. Whether you’ve decided to cut alcohol out of your life for good, for a night, or for just one drink, Athletic Brewing Company provides an option without compromises that you’re guaranteed to enjoy.