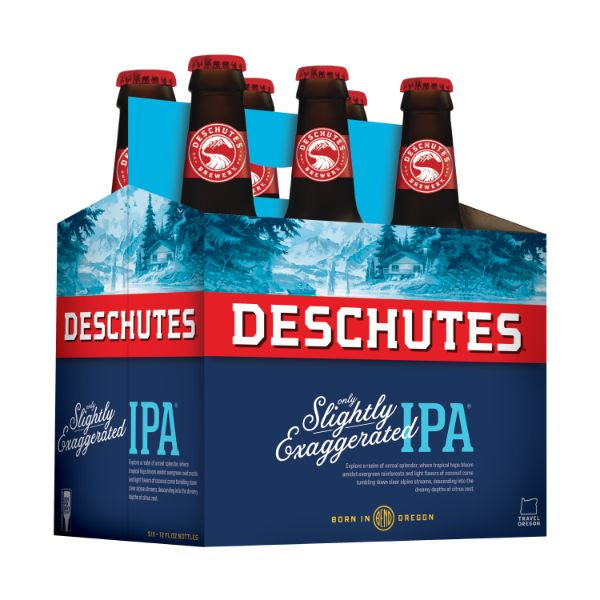 “We love the Only Slightly (More) Exaggerated campaign— the artwork is so whimsical and fun,” says Veronica Vega, director of product development for Deschutes. “We’ve paired the campaign with our newest seasonal, inspired by that same sense of magic.”

Slightly Exaggerated IPA was created using the profound Sabro hop, grown in the Northwest, that has a unique quality that gives the beer an exceptional “slightly exaggerated” flavor combination of bourbon barrel, coconut and tropical notes.  “It’s surprising that a hop could bring these characteristics to a beer,” said Vega. “We paired up the unique coconut character of Sabro with tropical hops to create something distinct from our other citrus led IPAs.”

The collaboration was born at the brewery’s original Public House in downtown Bend, Oregon in 2017 with Travel Oregon’s first “Slightly Exaggerated” campaign. “We’re thrilled to see this collaboration come to fruition. What started as a limited-run beer to celebrate the launch of a new campaign, will now be available to IPA-lovers in 32 states,” said Todd Davidson, CEO of Travel Oregon. “It’s all about getting in front of potential visitors—we want them to fall in love with Oregon products and know that these products taste even better at the source.”

“A lot of creativity and experimentation went into perfecting this IPA and it became extremely popular at the pub.” said Robin Johnson, assistant brewmaster at the Bend pub. “An abundance of hops was used on the hot side of the brewing process and the beer was dry hopped as well for the giant Sabro character.” Slightly Exaggerated IPA is the perfect addition to the brewery’s seasonal lineup and will be available for a limited time in August, following Twilight, through the release of Jubelale in October.

Slightly Exaggerated IPA is 6.0% ABV with 50 IBUs and is available in 12-ounce, 6 and 12 pack bottles and draft. This beer is currently shipping to wholesalers across Deschutes Brewery’s full distribution footprint and will be available at retail in early August.