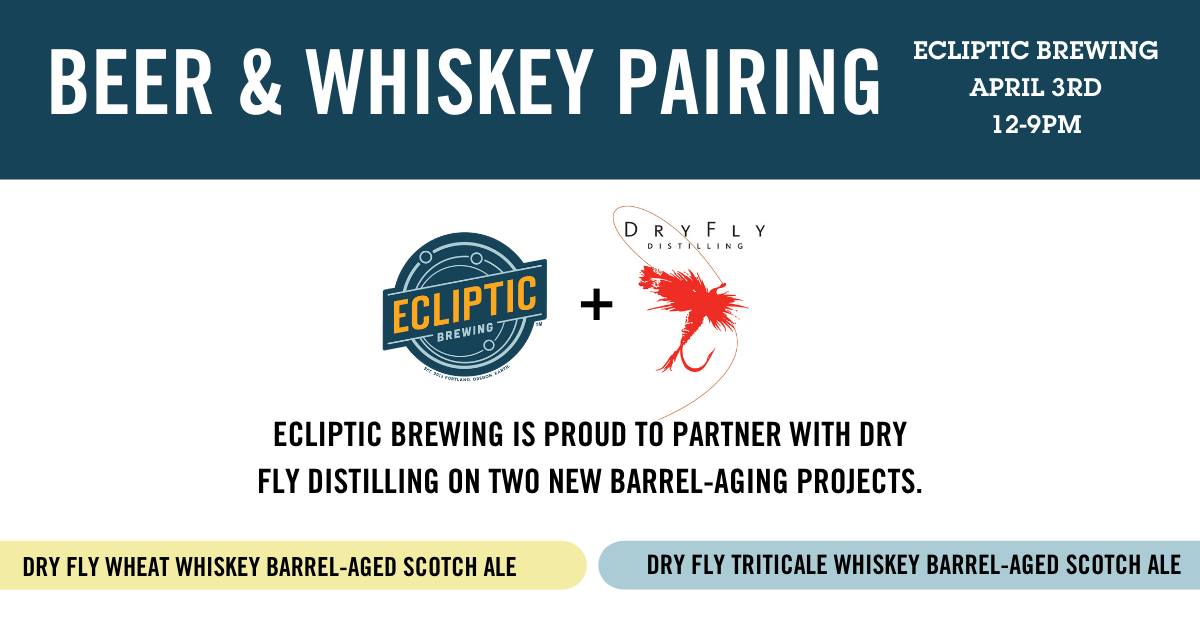 Dry Fly Distilling is an award-winning, small batch craft distillery that is a true farm to bottle operation. When Dry Fly’s VP of Sales and Marketing, Terry Nichols, reached out to Ecliptic about their “Cask and Release” project (i.e., Dry Fly sends freshly dumped whiskey barrels to a brewery for a barrel-aged beer, then the brewery sends the barrels back for Dry Fly to refill with whiskey), Ecliptic was excited to jump on board and experiment.

“Our Magnetar Scotch Ale was the perfect base beer for these barrels,” says Ecliptic’s Owner and Brewmaster, John Harris. “It’s a strong beer at 8% ABV, so it could handle the long aging period and heat from the barrels well. We’re pleased with how you can taste the differences between both of the resulting beers.”

Dry Fly’s Wheat Whiskey (Cask Strength) is the company’s highest rated whiskey ever, and it typically drinks much softer than its 120 proof. Ecliptic’s beer spent one year aging in these barrels, resulting in a slightly nutty and chocolate cherry cordial flavor.

Dry Fly’s Straight Triticale Whiskey was the first commercially available whiskey to feature this wheat strain. These barrels imparted aromas of dried figs and cherries, along with flavors of vanilla and oak, in the hibernating beer.

“I always had a lot of respect for John Harris as a legend in the craft brewing world and the beers coming out of Ecliptic were unsurprisingly fantastic,” says Nichols. “Ecliptic was one of my first calls [for the Cask and Release project]. The barrels have since been returned to Dry Fly to refill with their whiskey and begin the aging process again. The co-branded whiskey is expected to be bottled in about a year.

Both the Wheat and Triticale variants of this Barrel-Aged Scotch Ale will be released in draft throughout Ecliptic Brewing’s distribution network on March 31st. The beer will be available at Ecliptic’s restaurant beginning Saturday, April 3rd for a beer and whiskey pairing event. For updated information on all release events, please visit http://eclipticbrewing.com/.

About Dry Fly Wheat Whiskey Barrel-Aged Scotch Ale
In collaboration with our friends at Dry Fly Distillery, our Scotch ale was aged for 12 months in Dry Fly Wheat Whiskey barrels. The result truly tells the story of the barrel with aromas of oak and honey. These play nicely with a slight nuttiness and flavors of chocolate cherry cordials.
ABV: 10.5% / IBU: 25 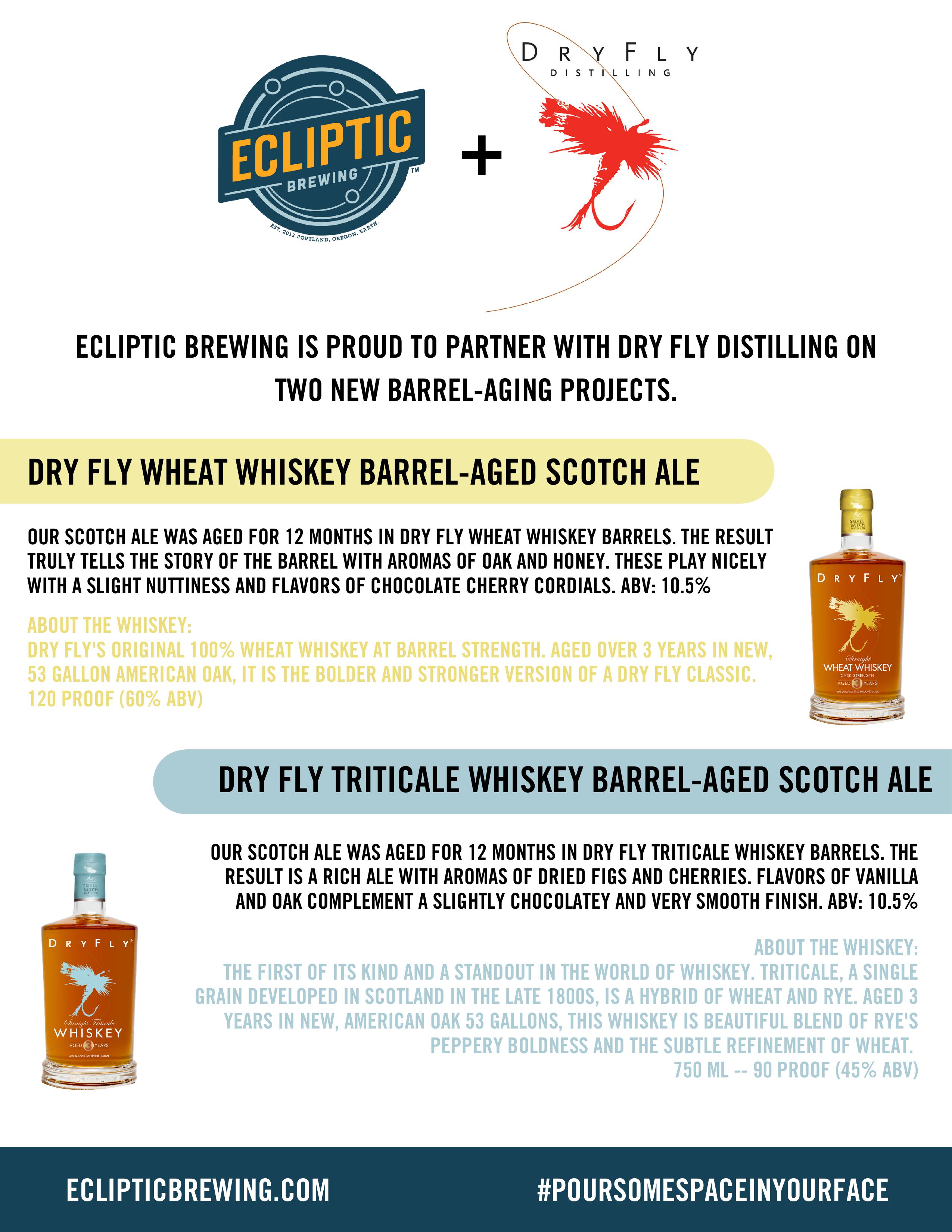 About Ecliptic Brewing
Ecliptic Brewing is a venture from John Harris, an Oregon beer icon whose background is steeped in the state’s rich craft brewing history. The name Ecliptic unites Harris’ two passions: brewing and astronomy. As such, the brewery celebrates the Earth’s yearly journey around the sun through both its beer and restaurant menus. Harris’ signature beers include Ecliptic Starburst IPA, Phaser Hazy IPA, Carina Peach Sour Ale and Capella Porter. For more information, visit: eclipticbrewing.com.

About Dry Fly Distilling
Founder Don Poffenroth created Dry Fly Distilling out of a passion for fly-fishing and the pacific northwest. They reflect the beauty of the area into spirits made from local ingredients and from sustainable farms. Because of this, Dry Fly Distilling has achieved a true farm to bottle operation. Every drop of liquor is hand-crafted and pure. This is obvious in the unique flavor, which has won awards worldwide. https://dryflydistilling.com/