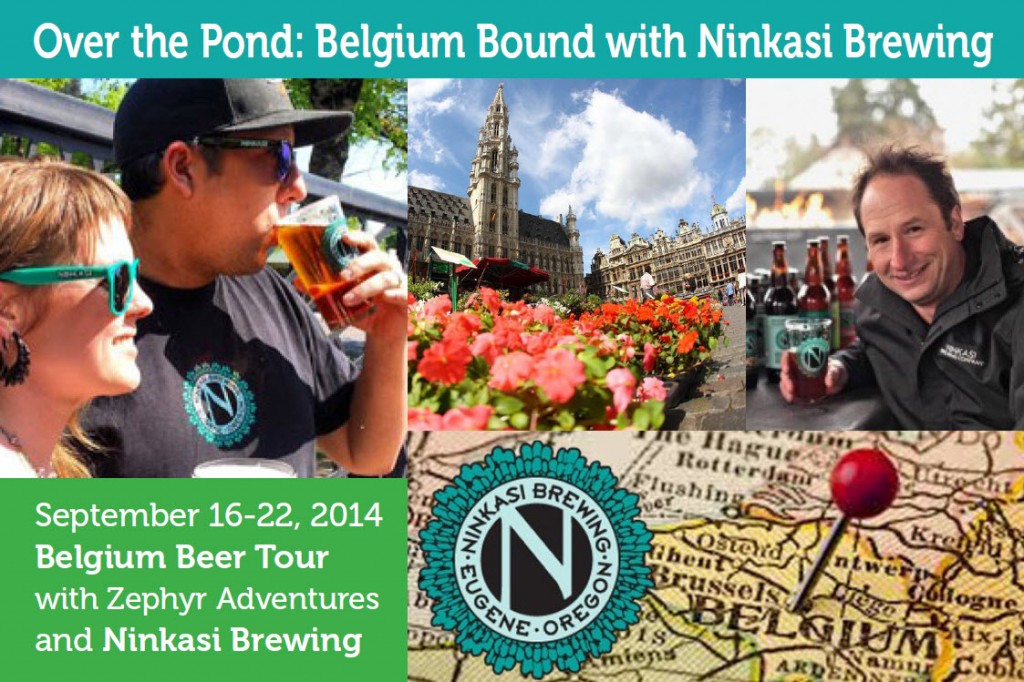 EUGENE, Ore.—May 29, 2014— Ninkasi Brewing Company, announces a new partnership with tour operator, Zephyr Adventures of Red Lodge, MT.  Their goal: to enhance the beer culture and community of Ninkasi Brewing by bringing family, friends, and fans of the brewery to Belgium on a beer-lovers trip of a lifetime this September 16-22, 2014.  The “Over the Pond: Belgium Bound with Ninkasi Brewing” trip features 6 nights and 7 days of travel lead by Zephyr tour guides and accompanied by Ninkasi founding brewer and co-founder, Jamie Floyd.

“Nikos (Ridge) and I founded Ninkasi on the principle to make products for our customers and run operations for our employees that contribute to a higher quality of life for all and including the communities and individuals where we do business,” relays Floyd.  “I am excited to represent these principles while traveling with a group of beer lovers to Belgium, where beer is an integral part of the cultural foundation and social connectivity of the country.”

The trip includes visits to over a dozen breweries, abbeys, and beer museums in six cities and villages in Belgium; highlights of the itinerary are:

A leader in group travel in the U.S. and abroad for 18 years, Zephyr Adventures created the Belgium Beer Tour to “meet the rising demand for fun and educational travel oriented to travelers interested in beer” comments Zephyr Adventures owner, Allan Wright.  He adds that the tour with Ninkasi Brewing “is a natural fit for two companies whose missions are aligned.  This partnership represents an opportunity for a beer traveler to immerse him or herself in another country’s unique beer culture and appreciate how different every brewery and country crafts their beverage.” Additional information regarding the “Over the Pond: Belgium Bound with Ninkasi Brewing” tour can be found on the Zephyr Adventures website.

Ninkasi founding brewer and co-founder, Jamie Floyd, was the Head Brewer at the Steelhead Brewery in Eugene, Ore. prior to starting Ninkasi Brewing with his partner, Nikos Ridge.  The brewery perpetuates better living in the true entrepreneurial spirit in the Whiteaker neighborhood in Eugene.  In 2013, Ninkasi was ranked as one of the “100 Best Companies to Work for in Oregon” and “100 Best Green Companies in Oregon” by Oregon Business Magazine.