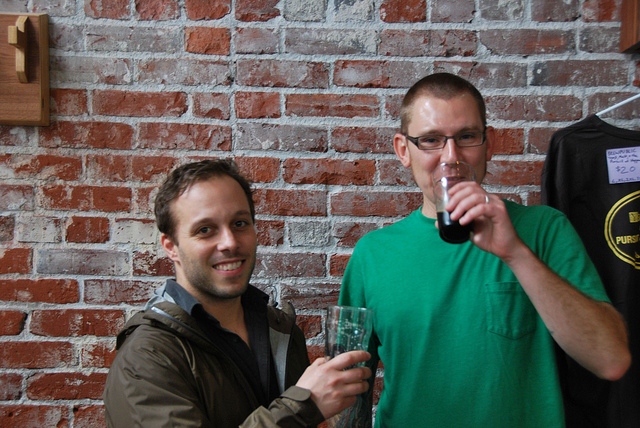 Breakside Brewery‘s brewmaster Ben Edmunds shared with us some news with the ever changing and expanding brewpub.Here’s the good word from Mr. Edmunds including collaborations, pumpkin beers, a new beer blog, and much more:
First off, many of you may already know this, but the brewers now write an official Breakside Brewery Blog. The focus here is mainly on technical brewing and the progress of our new production brewery, so you’ll find plenty to chew on if you’re looking to geek out on the details of some of our new beers. Also, we are in the final stretch of building out our new production facility; there’s still no official date for when we’ll roll our first brew out of there nor an opening date for the tap room, but the fermentors are installed, the brewhouse is fully piped, and we’re working furiously with all our tradesmen to get the thing up and running.
We’ve got a slew of seasonal beers that are now available or will be soon released. Here’s the skinny:

On tap now is our Pumpkin Biere de Garde 2012. One of our two pumpkin beers for the Halloween/Thanksgiving season, this brew is designed to subvert expectations around the flavor profile of what a “pumpkin beer” ought to taste like. We make this beer with little-to-none of the baking spices that are traditionally employed for pumpkin beers. Instead we turn to a cornucopia of Oregon ingredients: candy cap mushrooms, Jacobsen sea salt, and fresh ginger. The mushrooms and pumpkin flavors really take center stage in this beer; for those of you unfamiliar with candy caps, they have a dramatic, maple-like flavor that drives the beer. Also available are our two collaboration beers made with Upright Brewing and The Commons Brewery: “Rusticity” and “Lusticity” were both made for this year’s KillerBeerFest. We decided to do two ‘killer’ collaborations and brew them Iron Chef style: old brewers vs. young brewers. Each team got to design their own collaboration beer, and the only requirement was that the team blend in (at their chosen rate) some of a barrel-aged version of Upright Six with sweet cherries and Brettanomyces. The older brewers–myself, Jacob Leonard, Alex Ganum, and Mike Wright–made “Rusticity,” a Belgian rye stout and blended in the Upright beer at a rate of 25%. The young guns–Sam Barber, Andrew Horne, Gerritt Ill, and Sean Burke–made “Lusticity,” an amber single-hop saison and used the blending beer at a rate of 13%.
Then, there are a few beers that we will be releasing in November. Smoked Apple Ale is a project of mine that was inspired by beers from New Glarus and a famous dish with smoking leaves from Alinea in Chicago. It’s been on the drawing board for the last two years, and now it is finally ready to be released. The base beer is a relatively neutral amber ale made, in part, with German oak-smoked wheat. The beer is lightly spiced with traditional ‘apple pie’ spices, and then freshly pressed cider is added to the wort. We pressed over 200 lbs of apples to blend into this 3 barrel specialty batch. Jacob Leonard has two exciting beers coming out later this month, both of which harken back to the big beers he made famous at Walking Man: up first will be Jacob’s Imperial Stout. Part of this batch will go straight to bourbon barrels; the rest will be served on draught at Breakside with a limited bottle release sometime in December. Jacob is also masterminding our Imperial Red made for this year’s Holiday Ale Fest. Done in collaboration with Bryan Keilty of Lompoc Brewing, this beer will debut at the fest, and uses honey and flaked rye.
That’s all the news for now. Come later this month, we’ll have updates on the new brewery, a set of barrel-aged bottle releases in time for the holidays, and a couple of beer dinners that we have in the works for December.
Cheers,
Ben
Tags:Alex Ganum, Andrew Horne, Ben Edmunds, Breakside Brewery, Brettanomyces, brewpub, collaboration, Commons, Gerritt Ill, Jacob Leonard, KillerBeerFest, Mike Wright, Pumpkin, Pumpkin beer, Sam Barber, Sean Burke, Upright, Upright Brewing