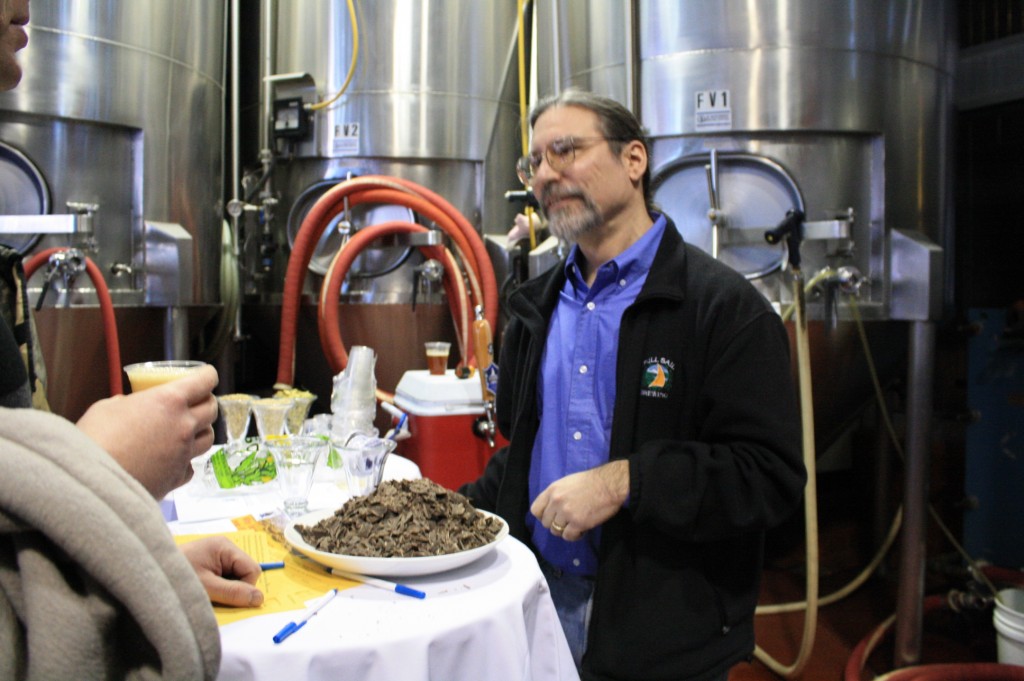 Zwickelmania, Oregon’s statewide brewery open-house and tour, returns in two weeks, so it’s time for beer enthusiasts to whip out their maps and start making itineraries.  With more than 55 breweries participating in the event onFebruary 19th, the task may seem daunting, but the Oregon Brewers Guild has all the info you’ll need to make sure your day is “Zwickelicious”… including the details on designated drivers. 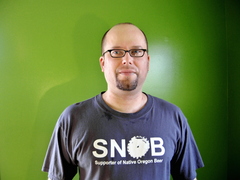 “As Oregonians, we’re fortunate to have so many great breweries open throughout the year, but Zwickelmania is special.  This is a once-a-year, one day opportunity for beer fans to brewery hop and sample straight from the source – often poured by brewers themselves,” says Oregon Brewers Guild Executive Director Brian Butenschoen.  “More than 10,000 people came out to celebrate the event last year, and we’re expecting even more participation this year.”

The Presidents Day weekend event takes its name from the zwickel, a sample valve mounted on the outside of the fermentation tanks, and offers visitors a chance to tour dozens of Oregon breweries, meet the brewers and sample their favorite beers. Breweries across the state will host open houses and special tastings on Saturday, February 19th, from 11:00a.m. – 4:00p.m.

Additionally, the Oregon Brewers Guild will provide free shuttle buses in Portland, Eugene and Bend to ferry visitors among multiple breweries throughout the city.  Participating OBG members – organized by region – include:

Brewer on site doing tours and tasters from 11-4pm.

Brewer on site doing tours and tasters from 11-4pm.

·    Deschutes Brewery – 901 SW Simpson Ave., Bend
Participate in a self guided tour of the brewing facility, talk with our brewers, learn to identify a “zwickel”, and sample some of our favorite brews! If you are a homebrewer yourself…leave with a booklet of Deschutes Brewery Clone Recipes and a 3oz bag of our delectable whole hop flowers for your next home brew batch.

·    Silver Moon Brewing Co. – 24 NW Greenwood Ave., Bend
They will be pouring something special in the brewhouse. Brewery tours on the hour from noon-5pm.

Brewery tours on the hour and the brewer will be on-site with tastings and beer discussion all day.

·    Alameda Brewery – 4765 NE Fremont St., Portland
We will be firing up the beer engine and pouring some specialty aged drafts from the cellar. Brewers on-site and will be doing tours of the open brewhouse from 11-4pm.

·    Ambacht – 1055 NE 25th Ave Suite N., Hillsboro
Brewers Brandy & Tom will be on hand and we will be tasting some of this years Honey Triple, made with honey from Tom’s bees right from the fermenter.

They will be giving short brewery tours and samples will be poured from the tanks.

·    Breakside Brewery – 820 NE Dekum St., Portland
They will be offering viewing of the brewhouse, tastings of beers out of the zwickel, full-time beers poured through the Randall, and the debut of a new seasonal beer – they are 95% sure it will be a San Diego-style IPA.

We are going to have house made sausages, known as our Brewery Pups, for sale in the pub and brewery for the

·    Cascade Brewing Barrel House – 939 SE Belmont St., Portland
Draft beers at the pub will see the return of a few favorites that have been gone for a bit. That day’s lineup of 18 taps: Bourbonic Plague, Vlad the Imp Aler, Sang Noir (2009), Sang Rouge, Kriek (2009), Apricot (2009), Noyeaux (2009), Beckberry, Saison (2011), Spring Gose (2010), Blueberry, Vine (2009), EIPA, IPA (a new one yet to be named), Spiced Amber, Cascade Pale, plus two Live Barrels. On the Production side of the barrel house, we will be offering samples from the barrel, including Bourbon Blonde Quad, a raspberry barrel from the Noyeaux blend, and Honey Rye. There will be tasting from the tanks off the zwickel.

·    Deschutes Brewery-Portland Pub – 210 NW 11th Ave., Portland
This is the only day of the year they are open for tours. Check out the tanks up close, learn to identify a “zwickel”, meet the pub brewers & sample some of their favorite brews.

·    Full Sail at Riverplace – 0307 SW Montgomery, Portland
Guided Brewery Tours at : 12, 1, 2, 3 and 4PM, sample a special pairing of our Brewer’s Share beer “Chris’s Revelator” and semi-sweet chocolate. You’ll even get to take home a complementary pint glass. A portion of the proceeds from Chris’s Revelator benefits the Hood River Smart Reading Program.

·    Laurelwood Public House and Brewery – 5115 NE Sandy Blvd., Portland
The brewers will be on hand for a cupcake and beer pairing with 4 styles of beer.

·    Lompoc Brewing Co. – 5th Quadrant – 3901-B N Williams, Portland
We will offer brewery tours from 11-4pm. Sidebar will be open that day as well with special Lompoc beers and complimentary appetizers.

·    MacTarnahan’s Brewing Co. – 2730 NW 31st Ave., Portland
Join the brewers from Pyramid Breweries and MacTarnahan’s Brewing Co. on a tour throughout the brewery, every hour on the hour from 12-4pm. Complementary zwickel samples of specialty and limited edition beers from both Pyramid and MacTarnahan’s, plus a sneak-peak at a brand-new beer from Mac’s! The Taproom will be serving up delicious beer-inspired menu items all day. Please note: tour sizes are limited to 20 people each and are first come, first serve.

·    Migration Brewing – 2828 NE Glisan St., Portland
Migration turns 1 + will be releasing their Russian Imperial Stout, made with 20% wheat to give it a silky mouth feel and English roasted malt. 8.7% ABV / 75 IBU’s. There will be bands throughout the day, the introductory offer for their mug club and brewery tours with Mike or Andy.

·    Philadelphia’s Steaks & Hoagies – 6410 SE Milwaukee Ave., Portland
We will be offering both free beer samples and pretzels throughout the event and guided brewery tours by our Brewer Patrick Watkins. Beer samples will include our Bourbon Barrel Aged Porter, Belgian Golden and our French Saison.

·    Raccoon Lodge & Brew Pub – 7424 SW Beaverton-Hillsdale Hwy., Portland
We will be offering brewery tours from 12-4pm and tastes of some of its outstanding specialty brews, including Straight Bourbonic (from the Live Barrel Series), Sang Rouge and 2010 The Vine.

·    Upright Brewing Co. – 240 N Broadway, Portland
Owner/Brewer Alex will be sampling beer from the tanks and the latest SNOB photographer and graphic artist Annalou V. will be pouring beers in the tasting room.

·    Widmer Brothers Brewing Co. – 924 N. Russell St., Portland
Offering free tours of their state-of-the-art brewing facility, and complimentary tastings and appetizers paired with the beers. Offering special release beers not available anywhere else along with their standard beers. Kurt will be checking ID’s and Rob and their brewing staff will be on-site giving tours. T-shirts, pint glasses, and other gear for sale.

·    Fort George Brewery + Public House – 1483 Duane St., Astoria
They will be conducting tours of their new 30bbl production brewery where guests can check out the new canning line and take a pull from the zwickel, which will fill cans of Vortex IPA and 1811 Lager. Along with brewery tours, the new tap room will be open all day featuring exclusive beers not available in the pub. Of course, the public house will be open for food and drink as well. Our 8 1/2bbl system inside the public house is still bubbling away with an array of finely tuned brew to taste. Fort George is celebrating Stout Month read all about it here

·    Pelican Pub and Brewery – 33180 Cape Kiwanda Dr., Pacific City
We will be offering tank samples for folks taking brewery tours. Brewers will be on hand to lead tours, talk about the brewing process, and serve zwickel samples.

·    Brewers Union Local 180 – 48329 E. 1st St., Oakridge
Brewer/Publican Ted Sobel will attempt to have a four or five-day-old batch in one of the fermenters for free samples of mostly-fermented real ale. Also, $4 Imperials between 11:00 and 4:00 for those mentioning code word “Zwickelmania.”

·    Fire Mountain Brewery – 10800 NW Rex Brown Rd., Carlton
The Brewer will be on site with free tours and tasting!

·    Ninkasi Brewing Co – 272 Van Buren St., Eugene
Tours available from 11:30 to 4:00 pm starting every half hour. There will be special beers on tap including this year’s Eugene collaboration brew that is a session style lighter pale with 100 % Glen Eagle malt and the new hop variety Falconers Flight in which part of the hop sales go to the Glen Hay Falconer Foundation. 4.7% ABV / 26 IBU’s. Oregon Natural Meats will be serving free sliders made from beer raise with our spent malt. Cousin Jack’s Pasties, a Whiteaker owned business who uses our beer as an ingredient will be serving free tastes of the delicious pasties we always serve as a snack at the tasting room. Weather permitting Ninaksi sponsored powerhouse Volifonix will play music in the Bier Garden. Make Ninkasi a part of your Zwickelmania experience!

About the Oregon Brewers Guild