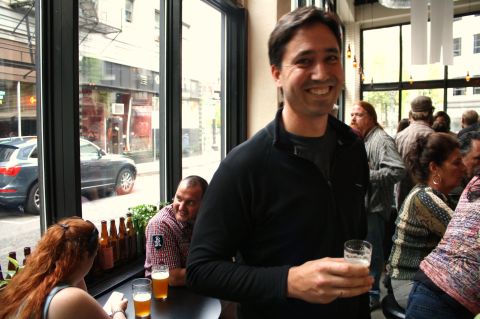 This weekend in their tasting room The Commons Brewery will be unveiling the first batch in their Yeast Series. According to brewery employee Josh Grgas, the brewhouse has also set aside a portion of Urban Farmhouse Ale wort and fermented it with two different strains: German Farmhouse Ale (Wyeast 1007 German Ale) and Bolleke Farmhouse Ale (Wyeast 3655 Belgian Schlede). Grgas says “We’re hoping this will be a fun experience to show the impact various yeast strains have on beer.”

The Commons founder and head brewer Mike Wright explains this Yeast Series, one similar to what Upright Brewing has been doing in their Sixth Barrel Series: “Basically it’s not a new concept. We have the 1-barrel system and the small fermenters” says Wright. “It’s easy to pull off wort and play around with new yeast and see what comes out of it. It’s pretty amazing how different the beer turns out with different yeast. And the tasting room is the perfect platform to showcase these variations.”

Grgas says “We’ll be offering a flight of the two variants, plus Urban Farmhouse Ale for $5.”

Tasting Room hours are Friday and Saturday from 5-9. The Commons Brewery is located at 1810 SE 10th Ave. Unit E, on SE Stephens, in Portland, Oregon. 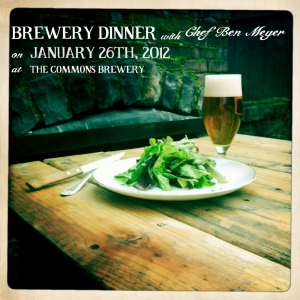 Also look for The Commons Brewery’s first in-house beer dinner with Grain & Gristle chef Ben Meyer at 7PM on Thursday January 26, 2012. This four-course dinner will be limited to thirty people ($42 per person). Here’s a look at the anticipated menu/beer pairing:

Absolutely want to bottle sooner than later. The only thing holding us up right now is TTB compliance, in changing up to the new name.

If you have any trouble with the Buy Now button, you can follow this link to make payment:
https://www.paypal.com/cgi-bin/webscr?cmd=_s-xclick&hosted_button_id=JLZLSXZEAFXVS