A week ago we reported on our day trip to Hood River, Oregon in the scenic Columbia River Gorge. Here we enjoyed the fruits of great craft beer at four top notch brewhouses. However, this is not where our story ends. After Double Mountain, Full Sail, Big Horse, and a sneak peak at Logsdon Farmhouse, we found our way across the truss toll bridge into a world so close and similar yet as an entity entirely its own.

An 8/10-mile bridge, known as the Hood River Bridge, is the second oldest connecting Oregon and Washington. From Hood River, as the crow flies, the route points directly toward the town of White Salmon, WA. However, due to the jagged nature of this mid-Cascadian path,  in order to reach downtown White Salmon from downtown Hood River, one must navigate through a prerupt northern ascent. At over 600 foot elevation, nearly 500 feet higher than Hood River, White Salmon and surrounding portions of Klickitat County can offer some breathtaking views of Mount Hood to the south. Taking advantage of this vista point is Everybody’s Brewing. Situated in the heart of the small town (over 2000 people call it home), the southern deck views from the brewpub, on a clear day, is killer. Everybody’s was founded by husband and wife duo Doug Ellenberger and Christine McAleer in late 2008. On a 20 hectoliter/17-barrel brewing system, the small-to-medium sized brewpub puts forth enough product to satiate palates at select Northwest area pubs, especially in Portland. 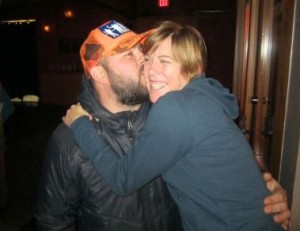 On our most recent visit to Everybody’s Brewing, a group of Portland beer buddies and I enjoyed a late cloudy afternoon brew whilst admiring Wyeast’s prominent positioning. Though the weather held a nip of soon-to-be-departed winter wetness, it was expected that each of us examine the spacious southside outdoor deck. Inside, the smell of fries and homecooked foods welcomed those hungry and us thirsty. An assortment of sessionable house brews included regulars such as Hoedown Brown, Puckerhuddle Porter, Local Logger Lager, Bro Brah Bitter, and a quintessential Daily Bread Common Ale – each under 6% ABV. One specialty of Everybody’s beer is the unbelievable balanced nature of their brews, especially when they’re involving floral, citrus, and pine notes of hoppy brews. Two house India Pales, the Country Boy IPA and the Goodwill IPA both examine the spectrum of ingredient play within a realm of balance of sweetness to bitterness. The lone imperial on our visit was the Big Brother Imperial IPA, which taxed in at 7.7% and 90 IBU (similar numbers to Fort George’s Vortex IPA).

After sharing samples amongst friends and knocking around some pucks at Everybody’s table shuffleboard game, we ventured on to our our way to our next beer destination… Check out our first review of Everybody’s back in 2009 here.