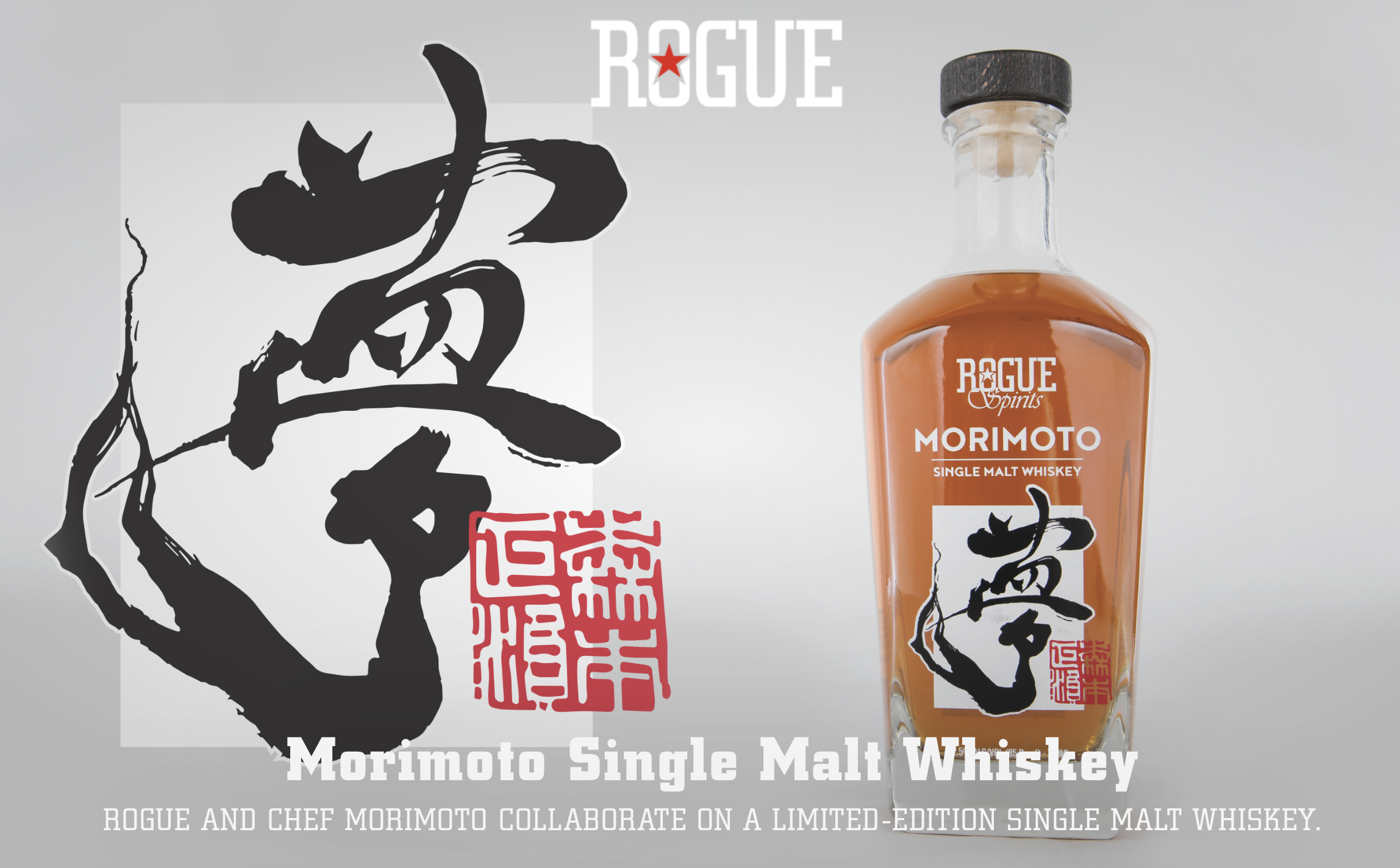 Through the past 17 years, Rogue Ales & Spirits have collaborated on various projects with Iron Chef Masaharu Morimoto. There have been numerous collaboration beers during this span and now comes his own limited-edition Morimoto Single Malt Whiskey.

The whiskey began four years ago in Newport, Oregon at the Rogue Ales in the brewhouse when the brew team brewed Morimoto Imperial Pilsner and Morimoto Black Obi Ale. Once fermented, the whiskey wash was then transferred to the Rogue Distillery that also sits along Yaquina Bay in Newport. Once there the wash was distilled and barreled in American Oak barrels. The barrels rested in Rogue’s Ocean Aging Room where they absorbed the Pacific Ocean air for over two years before being transferred for finishing in Oregon Oak. The Oregon Oak barrels were built by hand at Rogue’s cooperage, Rolling Thunder Barrel Works, and previously aged Rogue’s award-winning Rolling Thunder Imperial Stout. A year and a half later, the barrels were masterfully blended and smithed to create a unique, bold and limited American Single Malt Whiskey.

Rogue describes this hand-crafted single malt whiskey provides spicy aromas on the nose with subtle smoke and hints of coffee, chocolate, cocoa and dried fruit. On the palate, the prominent soba nut flavor melds with the distinct dark cocoa, toffee, coffee and vanilla provided from the Imperial Stout and subtle smoke from the Rolling Thunder barrels. To complete this bottle, it features a label that was designed by Chef Morimoto himself.

“It has been an honor to work with Chef Morimoto for nearly 20 years to make unique and interesting beers and spirits,” said Dharma Tamm, Rogue President, in a statement. “This new single malt whiskey is no exception – the combination of Morimoto Signature Imperial Pilsner and Black Obi, Rolling Thunder barrels and distiller selected proof make this something truly special. It has been a labor of love that we’ve spent years making.”

“My relationship with Rogue Ales & Spirits goes back nearly two decades and is the longest partnership of my career,” said Chef Morimoto, in a statement. “The Morimoto-branded beers have been guest favorites in my restaurants around the world, and I’m very excited to introduce this very special single malt whiskey to them this year.”

Morimoto Single Malt Whiskey is 85 proof and will be available for sale at Morimoto restaurants, Rogue Pubs in Oregon and retailers around the country. For more information, visit rogue.com. We look forward to trying this new limited Single Malt as Rogue produces some fine whiskey here in Oregon.