Witch Hunt is a a new brew being released from BridgePort Brewing in Portland, OR. Described by the brewery as a “spiced harvest ale”, this beer features an interesting confluence of ingredients. The base of the beer is constituted of chewy Caramel and Melanoidan malts that gives the beer a rich amber hue. It is then dry hopped and finished with cinnamon and nutmeg.

“With all of the pumpkin ales that come out in the fall, we wanted to try something a little different,” comments BridgePort brewmaster Jeff Edgerton. “This is still a beer that you can enjoy alongside the comfort foods of fall but the spice flavors are subtle enough that you can have more than just one in a sitting without being overwhelmed.”

The beer clocks in at a moderate 5.8% ABV and features 40 IBU (same amount of bittering units as BridgePort’s flagship India Pale Ale, which was considerably bold when it was released in the mid-90s).  The beer showcases the brewhouse’s English house ale yeast and this newer variety of Meridian hops that have “a slightly sweet lemony character along with an experimental variety of hops from Hopunion in Yakima,  ground Cinnamon and Nutmeg.”

BridgePort will host a Witch Hunt release party Thursday, August 9 starting at 5:30 p.m. at BridgePort Brewpub in Portland. Free and open to the public, attendees can be among the first to try samples of this new fall seasonal while supplies last. The brewpub team will also have a tarot card reader on hand for guests who want to get into the spooky spirit of this new brew. 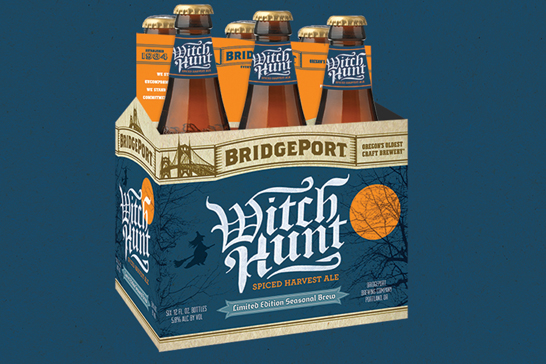