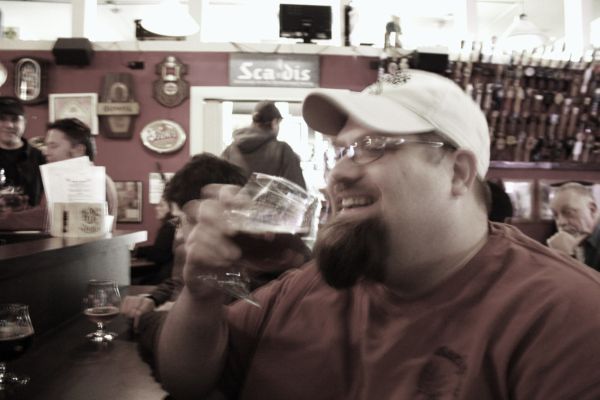 On Tuesday night Barley Brown’s Brewpub of Baker City, Oregon made a rare appearance in Portland at a meet the brewer event at Belmont Station. Brewer Shawn Kelso and owner Tyler Brown were on hand to share some of their specialty brews from their four-barrel nanobrewery including a two year vertical of the Sled Wreck Winter Ale, an Imperial IPA, and an Imperial uber-hopped Cascadian Dark Ale. Following a successful trip to the Great American Beer Fest that landed Oregon’s Far Eastern pub two medals, the brewery has been making more of a presence in the Rose City. BB’s will also be participating in the forthcoming Holiday Ale Fest during the first weekend in December. Brewpublic was fortunate to sample the five brews available at the Belmont Station event and conduct a brief interview with Shawn Kelso whose passion for his craft and people is far from abstruse.

Two different versions of the Sled Wreck–an ’08 and an ’09. The ’08 has a little bit of American oak character and some bourbon notes. How did this beer change?

Shawn Kelso: They’re basically the same recipe. On the ’08 I usually take a barrel or two…actually I should say a keg or two…and I have a neighbor with a whiskey barrel. Instead of putting the beer in the barrel, I put the barrel in the beer. In this case (the ’08), I used Wild Turkey and soaked some American oak chips, stick it in a keg of beer, and let it sit for a year. What we’re getting is some nice vanilla notes…definitely woody. It’s just a nice overall beer.

Now, we’ve got the Barley Brown’s Chaos Ale on tap. It’s a cool 11% Cascadian Dark Ale (That’s a black IPA for those who aren’t familiar). Where did this one come from and how the hell does something this magnificent and complex come out of Baker City? 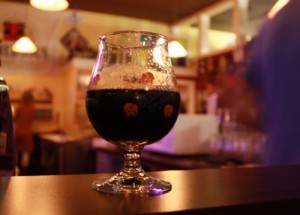 an Dark Ale, or Black IPA, since ’04. Our (regular) Cascadian Dark Ale is called Turmoil. That one  is usually between 7.8-8% alcohol…with huge hops. We thought “What the hell?” a few years ago and decided to brew a double version. Being that you’re in Oregon, you always want to push the envelope. So we brewed a double version of this black ale and came up with Chaos. This year I stepped it up a little more and threw in just huge amounts of Columbus and Amarillos (hops) and a hell of a lot of grain and came up with 11% (ABV). It’s a huge beer; very nice and unique.

Before I bust your chops over ingredients, I have to about a few other beers on tap this evening. Barley Brown’s Cherrywood Smoked Ale is probably one of the most unqual and perturbing beers I’ve had. Ultimately, it’s distinctly smoked beyond belief with a deep, earthy cherried flavor. What went into making this beer?

SK: It’s a play on our Whiskey Malt Ale which is a staple we’ve had forever at Barley Brown’s. It’s a nice amber, slightly smoked, nice sweet character, big malt, no hops basically. I should say it has a nice balance. In this case, I heard Briess (Malt & Ingredient Company) made of cherry-smoked malt and I thought “What the hell.” So, always trying to push the envelope, I doubled the amount of smoke I normally put in the beer and came up with just a huge frickin’ bonfire…or should I say one that’s been put out. Extremely smokey and definitely for the faint of heart.

Tonight we also have access to a cask WTF IPA described as a Northwest-styled IPA with Columbus and Amarillo hops at about 7.5% ABV and dry-hopped with Amarillo as well.

SK: Normally our IPA is called WFO IPA but here I’ve brewed the WTF, Winter Time Fun (laughs)…Yeah right. Normally in the winter I brew the Turmoil and the summer I brew the WFO (Wide Fuckin’ Open). I’ve been getting harrass lately about not having an IPA so I thought “What the fuck, let’s brew an IPA!”  And I just loaded it up with Columbus, Amarillo, a little Bomlander, some Two-Row, and came up with a really nice West Coast IPA.

This was a good year for hops in the Pacific Northwest, and Barley Brown’s is obviously no exception to this. You are off the chain with your monstrous ingredients…quite so for a little Four-barrel brewery especially! Are you guys going to step it up and start doing some barrel-aged brews?

SK: I know we’re always going to load our beers up with hops. I’d like to do more with malt. I just brewed an old ale that’s all Weyerman Munich Two-base that I put down a minimum of six months but more than likely a year. I think I’m going to call it Old Grumbler Olde Ale and we’ll see how that goes. But as far as barrel aging, I just need more space. Tyler Brown, owner of Barley Brown’s need to step up and buy old Shawn a bigger brewery.

What do you think it was about this year that made the judges recognize your beers?

SK: I don’t know. It’s a lot of guess work as to why we were recognized this year and not in the past. But all of our beers did really well. We just got the judging notes back from (GABF) and all of our beers went to the later rounds. That was really cool. But I don’t know, it’s all a roll of the dice sometimes. There’s a lot of luck to play.

SK: At times I did. If you would have asked me a year ago today, probably yeah, I would have felt that way. But since December when Carl Singmaster (owner of Belmont Station) asked me to come to Belmont Station and sell our beer here…and I did. In March was the first time and in May we did our first meet the brewer…We were all geared toward Boise, but Portland was really nice in accepting us and for us, standing out in this kind of market is just a bigger blow to your ego. It’s really cool.

Last question: Are there any Oregon breweries out there better than Barley Brown’s?

SK: No. None whatsoever, and if Ettinger thinks he has a better brewery he can go fuck off. (Laughs)

If you’re heading east on the I-84, Barley Brown’s encourages you to stop by for some of the best beer available in the Pacific Northwest. the brewpub offers delicious food, a relaxed sociable environment, and access to a unique part of Oregon’s beautiful landscape you won’t  find west of the Cascades.