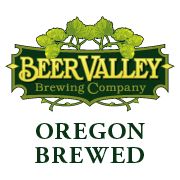 Oregon’s easternmost brewery, Beer Valley Brewingof Ontario has announces the release of two new craft beers to their portfolio. These include Treasure Valley Ale (TVA) and Half Mast Cascadian Dark Ale (CDA). TVA is quite different than many of brewmaster Pete Ricks’ high octane, highly hopped offerings. This beer, at just 4% ABV and  19 IBU is the first commercially available beer to be brewed, kegged, and bottled with all Treasure Valley hops.  According to Ricks there is a significance in the number 19.

“Well, Highway 19 runs right through the heart of Treasure Valley hop country so I thought it would be a good number,” says the brewer.  “We didn’t want to create a bitter, 4% beer and I didn’t really want to call it a 4% IPA even though we back-loaded the hops to give this beer some nice hop flavor and aroma” Ricks adds. “We formulated TVA like we formulate all of our beers.  We don’t start with a recipe guideline when we formulate bur rather try and create unique, flavorful beers that people will enjoy.  If we can fit them into a category for competitions, great, but it isn’t a real high priority.  So we’re calling this beer a refreshing, easy drinking 4% beer with a lot of local hop character, or just TVA.” 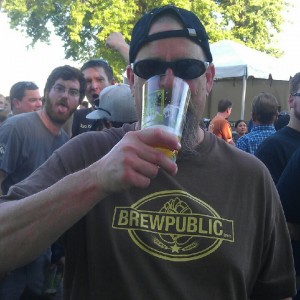 Treasure Valley Ale is an easy drinking,  4% ABV, golden colored beer brewed with Idaho barley and Cascade, Chinook, and Zeus hops added for flavor and aroma.  “We’re kind of  known for brewing big, aggressively hopped beers like Leafer Madness and Black Flag Imperial Stout but we’ve also built a nice stable of lower alcohol beers over the years and that is where we wanted to position TVA.  We wanted a lighter beer that was sessionable, but would let the local hops shine through as well.” said Ricks.

Treasure Valley Ale is currently available in draft only at select accounts throughout the Beer Valley distribution chain.  22-ounce bottles will be available late spring and into the summer. 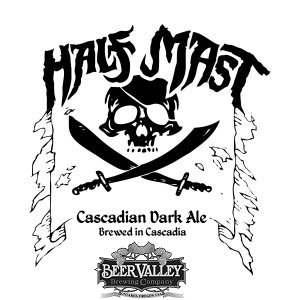 Beer Valley’s Half Mast Cascadian Dark Ale is a beer that Ricks says he’s been wanting to brew for a while now.  “Obviously we have Black Flag (a highly hopped Imperial Stout) in the portfolio but we’ve been wanting to create some new beers themed off of the Black Flag” admits the brewer. “As you know, we’ve also threatened to brew a double version of Black Flag in the past and almost brewed it this last fresh hop season but ran out of brewing bandwidth to pull it off.”  So instead of a doubly face-melting dark roasty and hopped-up monster the brewer went in the other direction and, in his words “decided to launch a Cascadian Dark Ale version of Black Flag with more back end hop character first.” Says Ricks “Half Mast is brewed with the same eight malts as Black Flag but we do try and hop it up a little more by whirlpooling and dry-hopping with loads of Northwest C hops.”

Half Mast clocks in at 7% ABV with a bold 70 IBU. Ricks describes the color of the beer as “pirate black.”