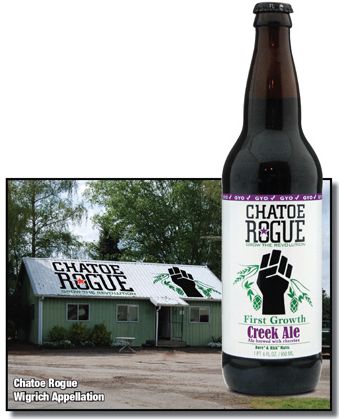 Rogue celebrates the rivers, lakes, streams, ponds and creeksof Oregon with the release of Chatoe Rogue Creek Ale. Creek Ale is a Belgian style Kriek Ale dedicated to the Willamette River that runs along the eastern edge of the Rogue Hopyard.

Creek Ale is brewed with First Growth Oregon hops and malt from Rogue’s own micro hopyard and barley bench. The Rogue barley bench is located in Oregon’s Tygh Valley Appellation and Rogue’s 42 acre hopyard is located in Oregon’s Wigrich Appellation, where Rogue currently grows seven different hop varieties. Rogue remains dedicated to saving the terroir of Oregon hops and barley, one acre at a time, by growing our own.

For more information on Chatoe Rogue releases, Tasting Room hours, Hopyard tours, or overnight stays at the Hop ‘n Bed, please contact the Rogue Department of Agriculture at 503.241.3800. Creek Ale will be on the shelves October 1st.