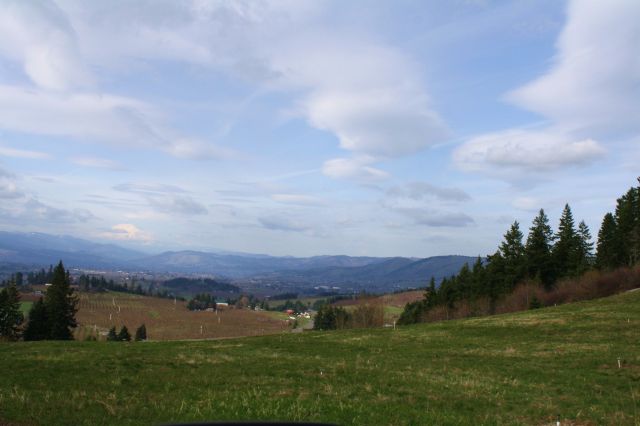 It’s hard to think of a better place to take an Oregon “staycation” than the majestic Columbia Gorge, more specifically, Hood River. One of the nation’s greatest towns, Hood River is situated at the crossroads of the Gorge and the mighty Cascade Mountain Range, nestled beneath imposing Mount Hood and with scenic views of Mount Adams.

Over the weekend we ventured out to the Hood, beatified by a remission of spring’s rain, and made the just over an hour drive to our destination. In 2008, appointed by Brewers Association president Charlie Papazian as “Beertown USA” for having the most breweries per capita (the good doctor notes 3 breweries in 6,736, or 1 brewery per 2,345), Hood River is more than just the obvious recreationalist’s dream destination, it is a beer lover’s haven. And it’s not just the quantity of breweries for its size (today numbering with four), but it’s the quality of each that makes craft a newer, highly relevant aspect of Hood River’s tourist draw.

The most notable Hood River brewery is Full Sail, founded here in 1987, was one of a handful of Oregon’s first breweries following the craft beer revolution, the first to bottle its product, and claims to be the first to produce an amber ale.The original small brew system can be viewed at their Riverplace Portland pub where many limited run beers and one-offs are produced. The bulk of their beer, however, is still being produced on their 200-barrel Hood River system. 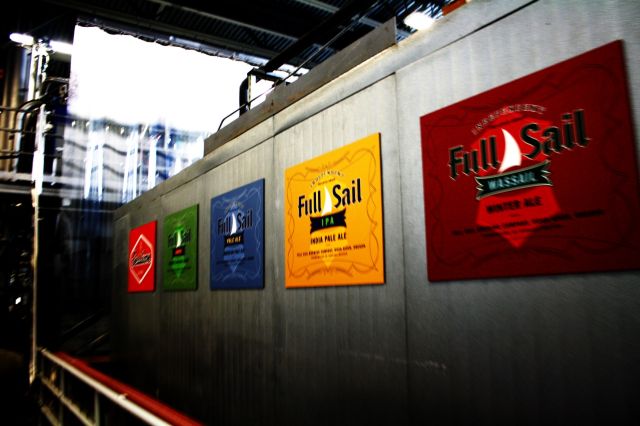 On our visit, our practiced and amicable tour guide Randy, an employee owner of the company, explained, “We tasted a Redhook and thought, ‘We can do that!'”Randy provided a small group of us a highly informative tour of the facility and we also discovered that Full Sail is the largest manually operated brew systems in the country, joking that the only computers were those in the office that were used for stuff like fantasy football and surfing the Internet. 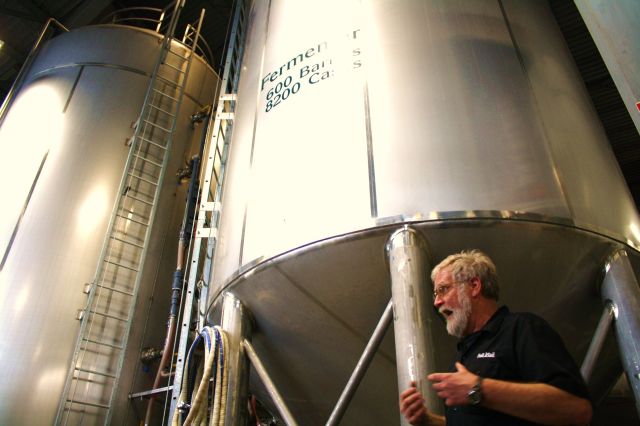 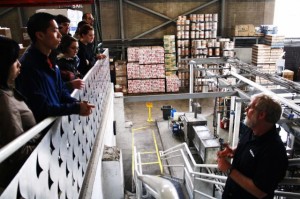 If you find yourself in Hood River and love craft beer, a Full Sail brewery tour is where it’s at. The offer four tours daily at 1,2,3, and 4PM, and they are free of charge. Next door in the tasting room, you will find an assortment of delicious beers and a sizable food menu sure to accommodate most any palate.On our trip we enjoyed the Black Gold Bourbon Imperial Stout, a deep abysmal, boozy beast worth letting warm up to sip and perfect for pairing with your favorite cigar. For those with something lighter in mind, try one of their Session Ales in beckoning stubby bottles, or the seasonal Hop Pursuit Pale Ale from their Brewmaster’s Reserve Series, a very drinkable aromatic and citrusy beer that lives up to its name. 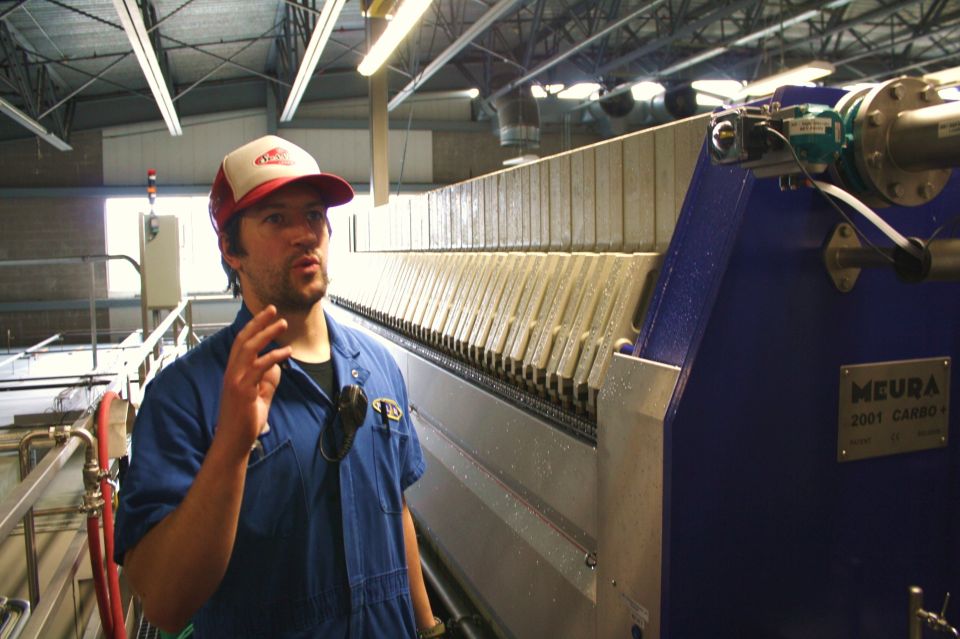 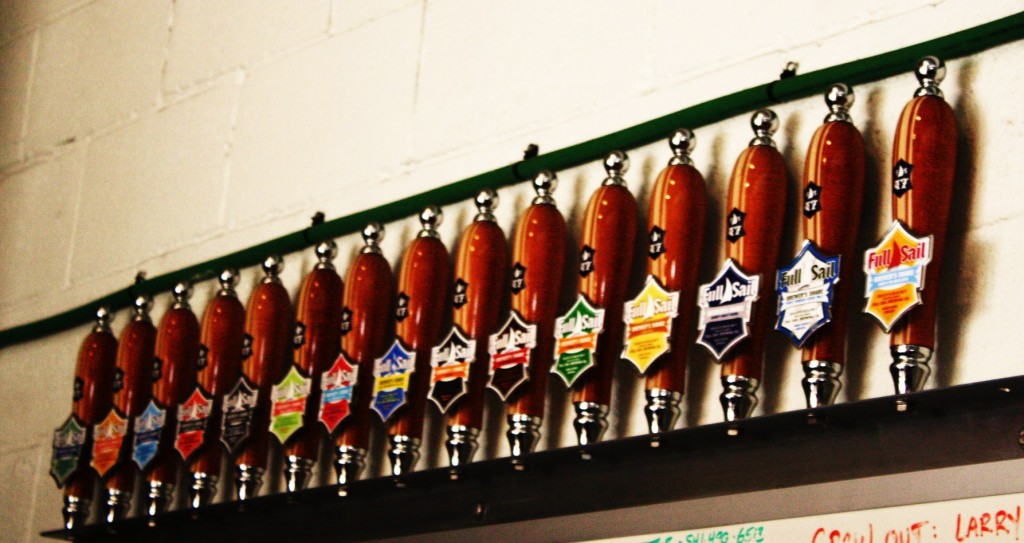 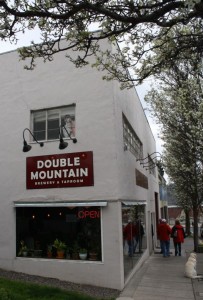 Since opening in 2007, Double Mountain has been a world class destination of beer for any enthusiast of the Northwest. Founded by former Full Sail brewers Matt Swihart and Charlie Devereux, DM has served as a good counterpart to the much larger Full Sail, just around the corner. Located next to Hood River’s post office on 4th Street, this 20-barrel brewery has, in its short life, evolved into quite a craft beer icon. Living up to their mantra of being a “brewers’ brewery,” DM personifies both imagination in brewing with uncompromising consistency in quality. Using two unique yeast varieties (they also occasionally employ some Brettanomyces and other specialty strains for a number of one-offs like their Devil’s Kriek), the brewery puts forth a variety of complex and assertive brands for draught only. 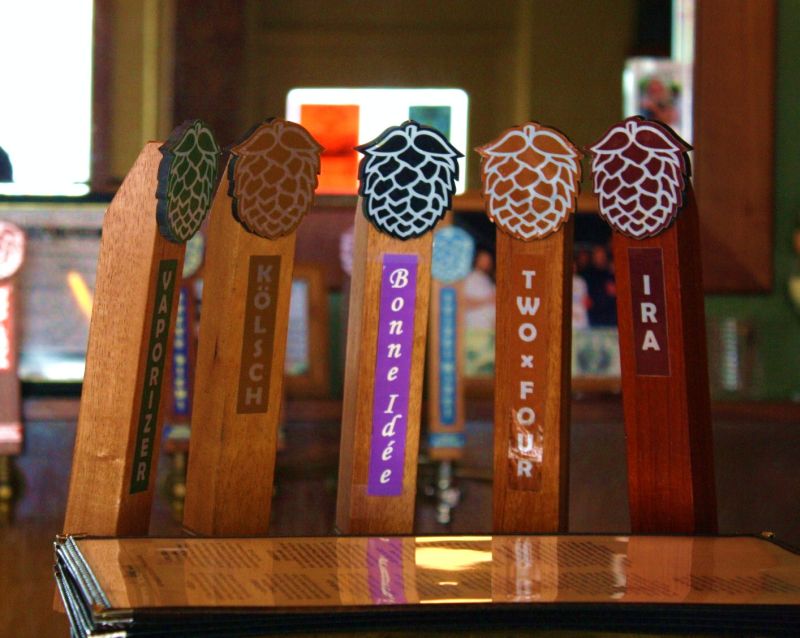 On our visit to Double Mountain, we found many old favorites like their Kolsch, Vaporizer Dry-hopped Pale Ale, and IRA alongside some distinct esoteric offerings like Sacre Bleu, a Trappist-style ale harnessing a proprietary from the Abbaye de Scourmount (Chimay), and the Tripel Nipel, a Belgian-style ale with a dry mouthfeel garnered from the addition of locally sourced wildflower honey. 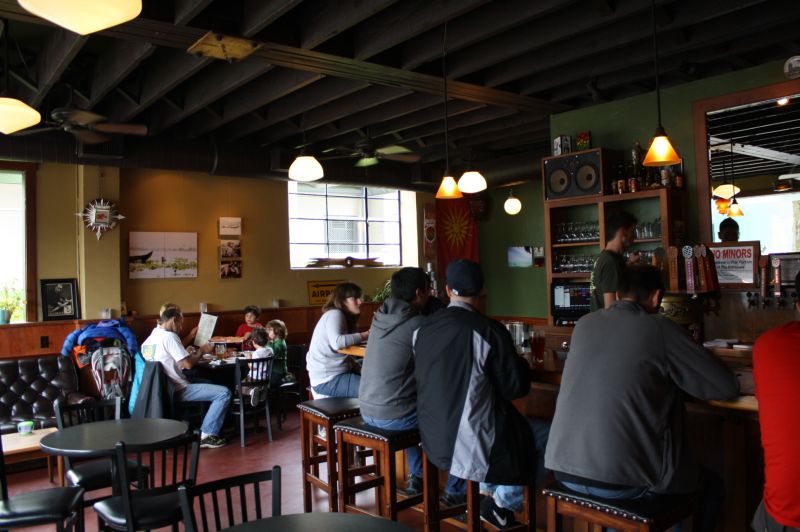 It is apparent when visiting Double Mountain that the beer is not all that lures folks. Their brick oven pizza is that of legend. When we were in the taproom early in the afternoon, everyone and her cousin was enjoying herself a slice. They also offer locally sourced bratwurst sausages and salads. 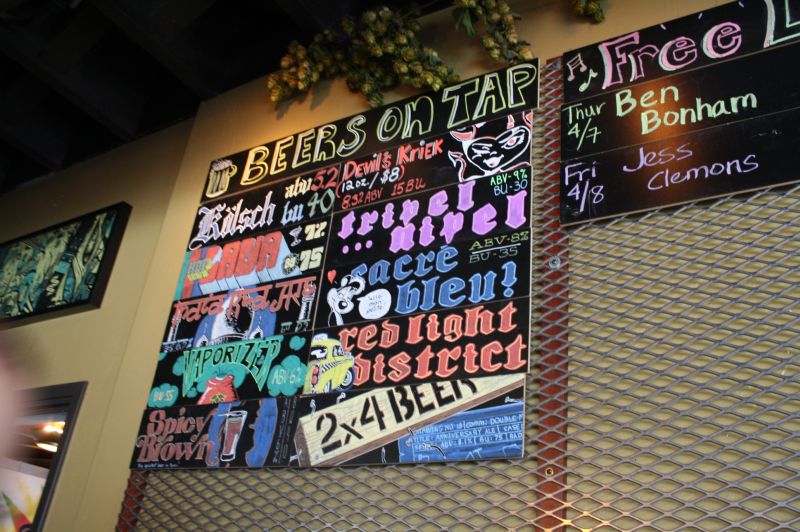 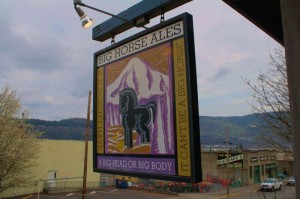 Sitting on a hill overlooking downtown Hood River and the Columbia is Horsefeathers Restaurant, pouring the beers of the smallest brewery in town. Big Horse’s small 4-barrel system rests beneath the establishment, quietly cranking out a variety of palate-wowing wonders. Brewer Jason Kahler has a penchant for big hop-forward beers like the Jedi Hop Trick, Pale Rider IPA, Vernon the Rabbit Slayer Imperial Fresh Hopped IPA (super limited seasonal), and a new sessionable All Day IPA (just 4.8 ABV but with a big hop punch). In addition to his lupulin lover’s line-up, Kahler also produces some great brews that highlight rich malt characters such as his peaty, chewy MacStallion Scotch Ale and his Nightmare Stout. If you make it to Cheers to Belgian Beers at the end of the month, you may get to examine some of Kahler’s blending abilities and use of funkier yeast varietals. 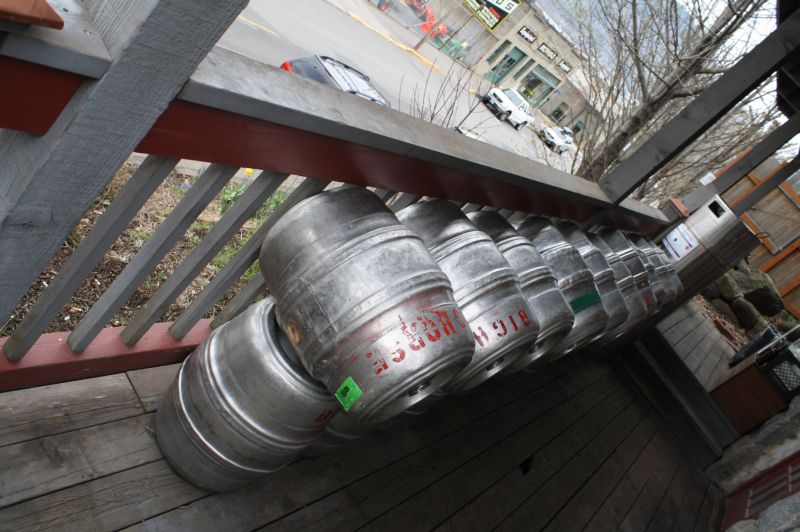 Since Big Horse Brewing is such a small operation, the beers are rarely tasted outside of the brewpub. We recommend you get on some of them if ever presented the opportunity as they are truly some of the best Oregon has to offer. 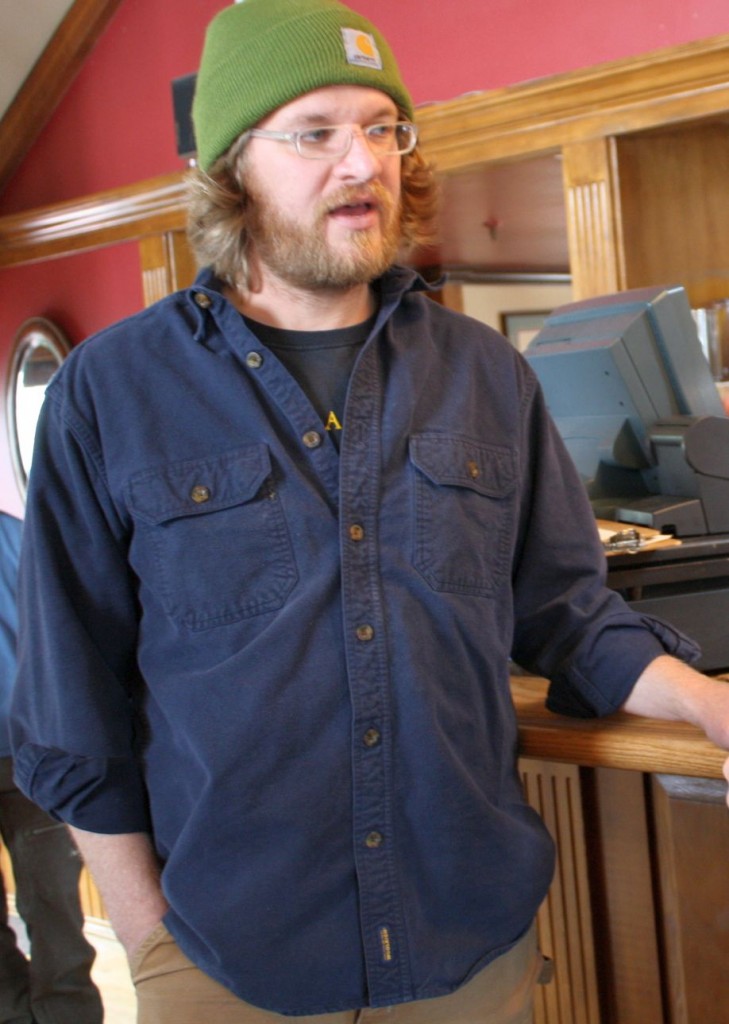 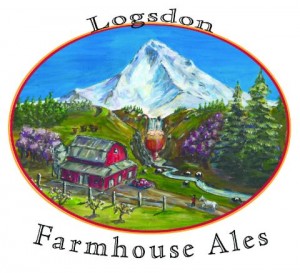 Full Sail, Double Mountain, and Big Horse are all a stone’s throw from one another in downtown Hood River and make it easy to get a feel for much of what the town’s beer scene is all about. However, a new brewery has emerged on the outskirts of town, one with very much its own personality. Logsdon Farmhouse Ales, named for founder and Oregon brewing pioneer Dave Logsdon, is in the process of releasing some of their first beers to the public. Along with his partner Charles Porter, Logsdon is developing ales in the tradition of the Belgian farmlands. These beers offer character unlike many that most American beer drinkers – both craft and domestic – are accustomed to. 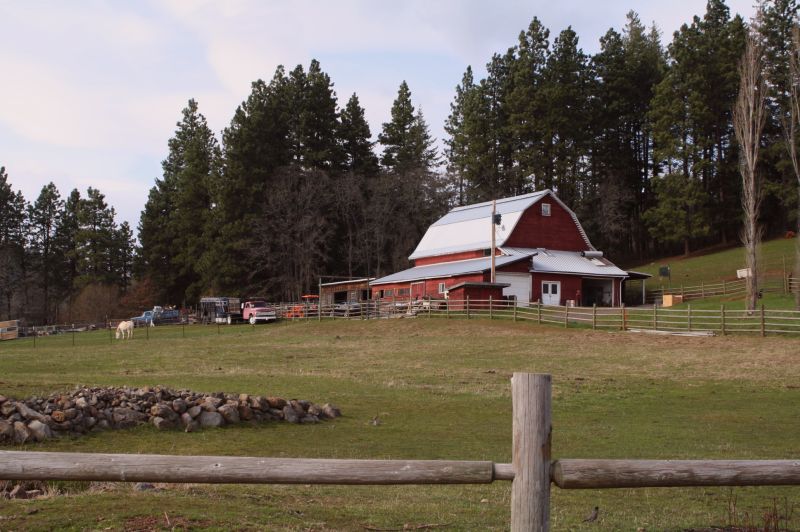 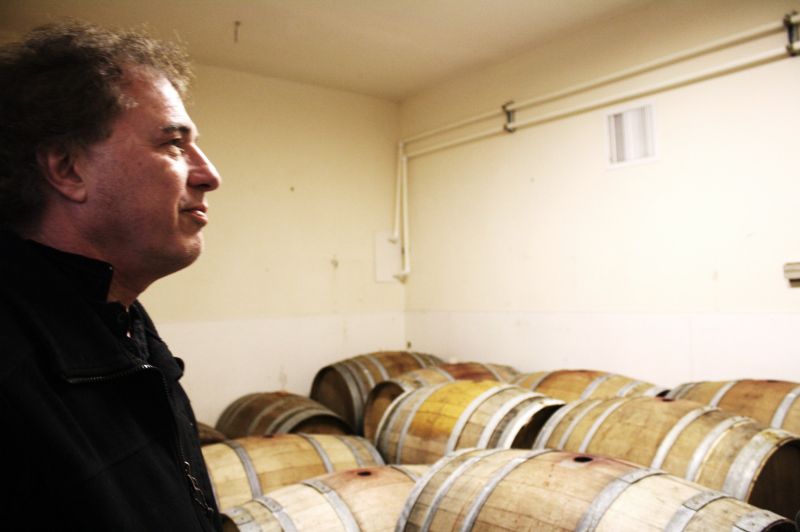 Unlike a few other breweries such as Upright and Beetje of Portland who brew the traditional French and Belgian farmhouse flavors such as saisons, Logsdon’s definition of farmhouse is quite literal. Off Highway 35 down winding country roads is where Logsdon’s spacious farmland brewery resides in a picturesque red barn amidst rolling green hills and groves of Ponderosa Pine and Douglas Fir. The farm also is home to many animals including horses, dogs, cats, and even some highland bulls. 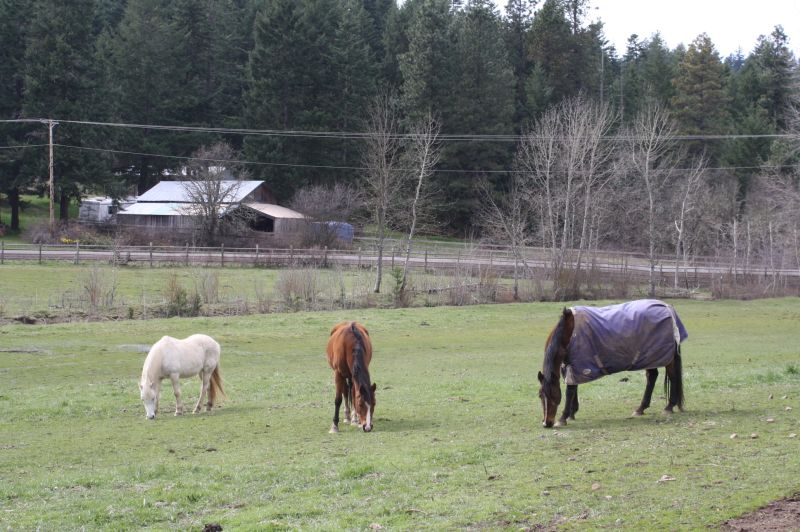 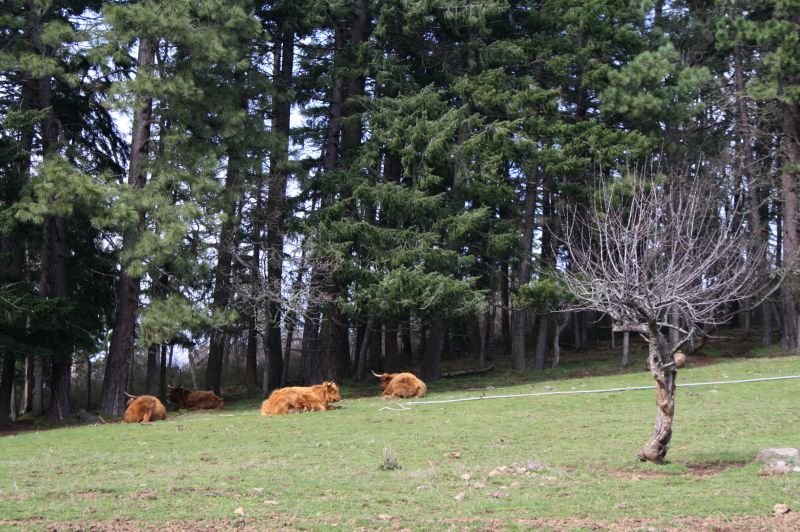 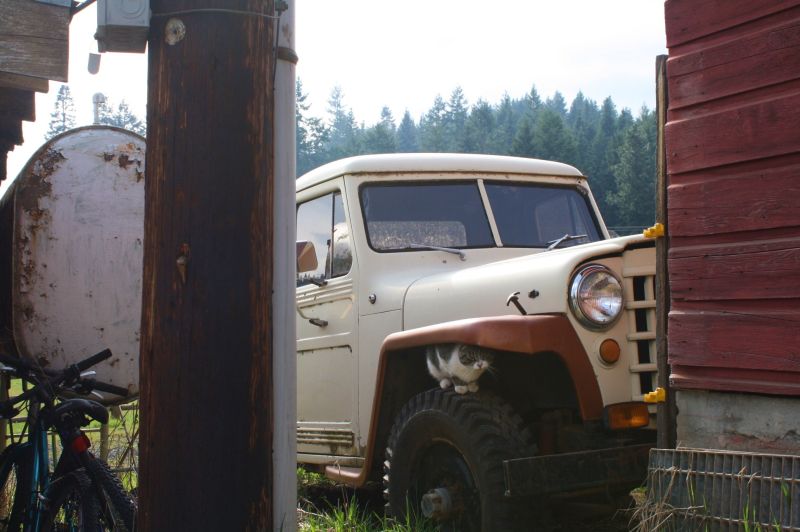 Dave Logsdon got his start as Full Sail’s original brewer before founding Wyeast Labratories in Odell, Oregon. Both endeavors proved fruitful and are still thriving as nationally known entities today. Logsdon was inspired by trips to Belgium and has found a passion for the natural living of Hood River County. This is why all beers produced by Logsdon Farmhouse will be organic. His 14-barrel brewery is fermenting up a few versions of his Seizoen (saison) including Seizoen Bretta, a bold (about 7.5% ABV) effervescent and quenching ale innoculated with Brettanomyces. Currently the first batches are in the fermentors and nearing their expected bottling date sometime this spring. Logsdon and Porter intend to bottle condition their brew. The bottles will subsequently be dipped in beeswax from the area. A bottling line from Italy is in place and has been worked on for some time.”It was not working when we got it but it is coming along and should be ready soon” says Porter. 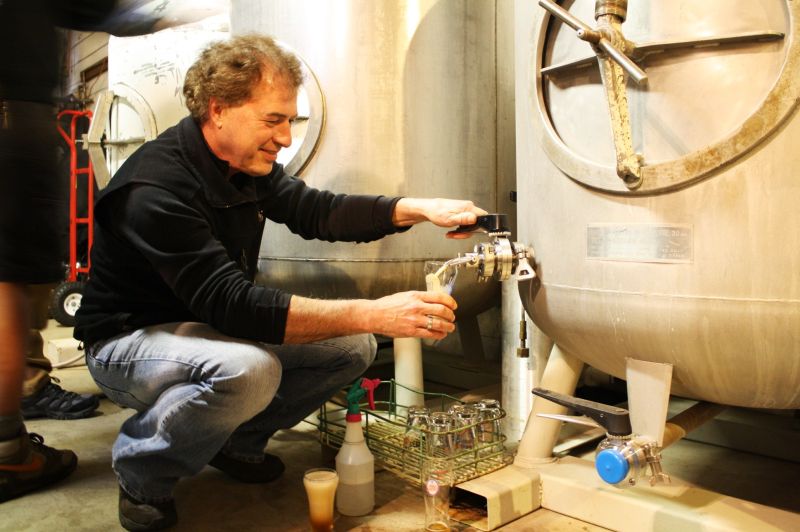 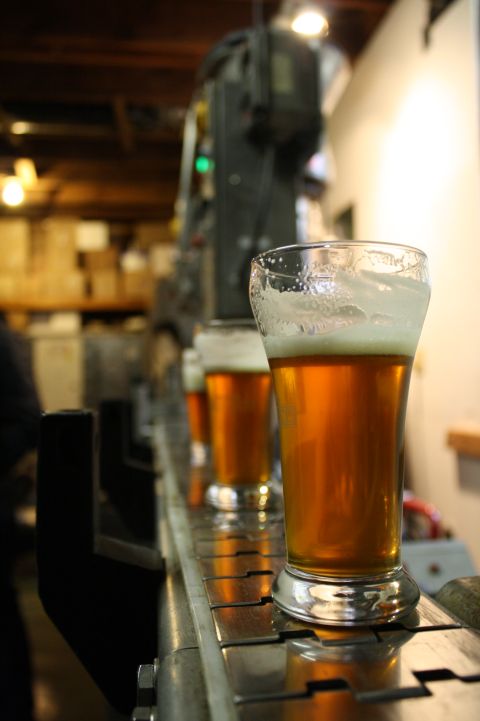 “We are working hard to have the farm ready for summer” says Logsdon. This includes the onset of growing some cherry trees brought in from the Lambic region of Belgium. This will allow for the production of some sought after lushly tart mouthwatering beers. Authenticity runs deep at the farmstead. Logsdon’s partner Judith Bams is herself from Belgium, and says the brewer imparts “much of our inspiration and many resources…(Judith) is an important part of our operation.” Also in the barn/brewery, about a dozen wine barrels await use for conditioning and a unique European draught system awaits use (a voltage converter was needed to make it usable stateside). “It’s exciting to us to be doing what we love” Logsdon says. And who can blame him? We could have stayed forever. But, of course, there were more beers to drink elsewhere so we were forced to move on… 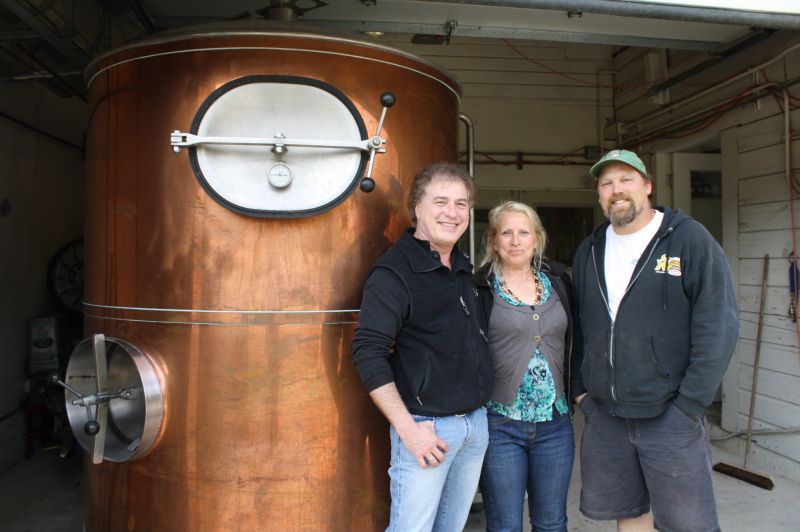