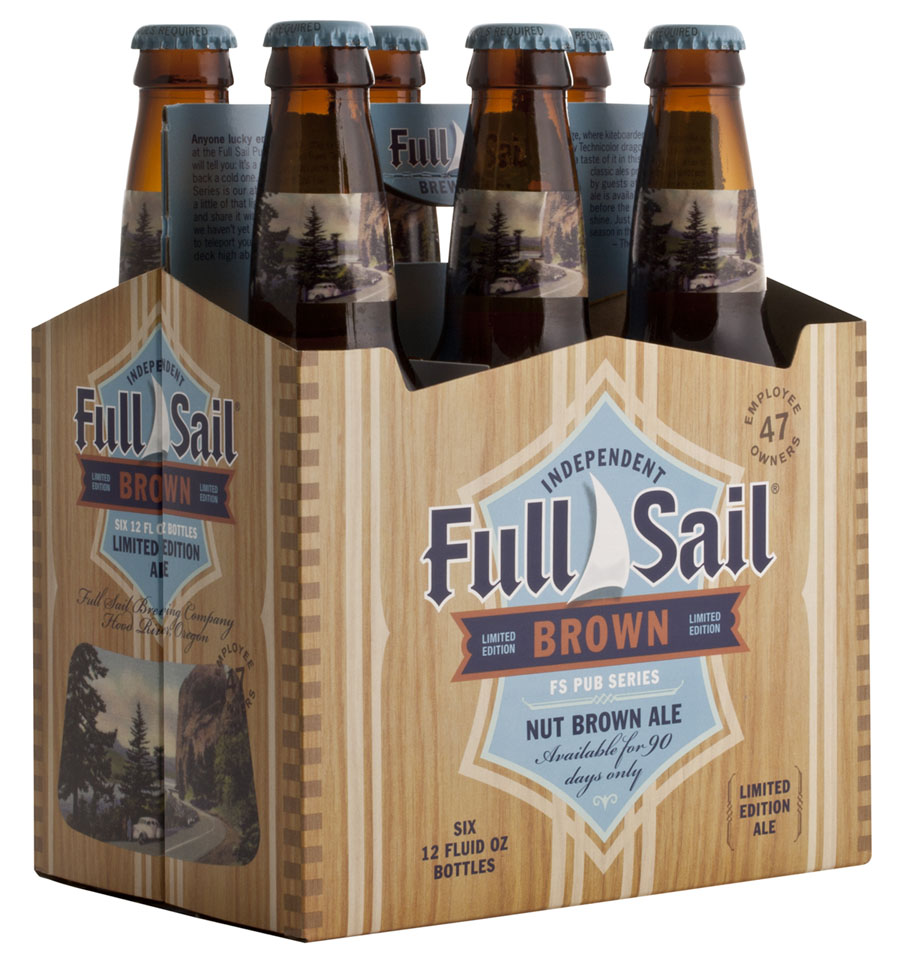 Hood River, Oregon – Full Sail Brewing has just announced the release of a new rotating line of classic ales called the Pub Series. “Anyone lucky enough to stop for a pint at our Pub in Hood River, Oregon, will tell you: It’s a spectacular place to share a beer with friends. The Full Sail Pub Series is our attempt to capture that experience a bottle and share it with all our customers who have not had a chance to see us first hand. We can offer you a taste of our pub in this rotating series of classic ales previously enjoyed only by our guests at the brewery. Each selection will be available for only 90 days before the next gets its turn to shine. Just like each epic season in the Gorge,” said Irene Firmat, Full Sail Brewing’s Founder and CEO.

The first beer in the series is Nut Brown Ale, a smooth, malty & easy drinking dark beer. “After a long day on the

mountain carving turns in deep powder, snowboarders and skiers make their way down the mountain to warm up and relive all those great runs in our pub. Our British-style Nut Brown Ale helps fuel the stories of deep powder and epic yard sales. The combination of 2-row pale, crystal, and chocolate malts impart an array of malt and chocolate flavors in a medium bodied ale with an extremely smooth palate. Nut Brown Ale drinks smooth and easy so those epic tales can go on and on. Fuggle and Mt. Hood hops contribute a slightly spicy aroma and finish to complement this beer’s malt character,” said Jamie Emmerson, Full Sail Brewing’s Executive Brewmaster. Nut Brown Ale is available in 6-packs and on draft for 90 days only from January to March when the next beer in the series will be released.  ABV 6.0% IBU 31

The independent and employee-owned Full Sail Brewery is perched on a bluff in Hood River, Oregon, overlooking the most epic wind and kite surfing spot in the world. At this very moment our specialists in the liquid refreshment arts are crafting barley and hops into your next beer. Among the company’s most popular brews are Full Sail Amber, IPA,  Limited Lager Series, Pub Ale Series, Session Premium, Session Black, and Session Fest lager. Founded in 1987, the Full Sail crew has been fermenting godlike nectar for 25 years.  Committed to brewing great beer and sustainable practices, their award winning brews are now available in 29 states. The Full Sail Tasting Room and Pub is open seven days a week. Swing by for a pint, grab a bite, tour the brewery, or just soak up the view.  http://www.fullsailbrewing.com  ###