Getting a brewery off the ground takes a lot of time, resources, and elbow grease.  As a brewery pushes forth to get its doors open, the impending enthusiasm of the beer community resonates from all five quadrants of the 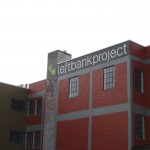 city and echoes beyond.  Rarely on projected schedule, many laboring brewers realize the hard work that surrounds the ultimate goal: brewing the beer that has loomed as a vision, waiting to come to fruition, and share it with the public.  Extending their life’s work beyond the confines of a garage or cellar space and into the public forum often sees more work going into crossing the t’s and dotting the i’s-something no brewer looks forward to.  Portland’s craft beer community will soon be gladdened by the emergence of a unique, flavorful product under the moniker of Upright Brewing.  Behind the beer resides a dynamic, astute, young man named Alex Ganum whose friends know as a go-to guy when it comes to great beer.  His unpretentious attitude toward beer has been evident in his collaborative homebrews and his willingness to share his ideas on all things beer. Now, as March winds down, Ganum’s brainchild, Upright will give face to his experience and dedication.  And all you’ll have to do is snag yourself one of his grubbin’ brews and quaff away.  Here’s a some of the lowdown on Upright: 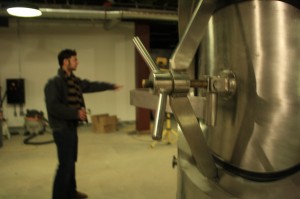 You’ve made a lot of progress with your new space with new brewing equipment installed. How is it coming?

Alex Ganum: The brewery is coming along great. We’re really excited about firing up and hope to have the first two or three batches fermenting by the end of March.

What was your experience like working with JVNW, the company who helped with the design and production of your brew system?

AG: JVNW has been a pleasure to work with. They make excellent equipment and the benefit of having them nearby (in Canby) is huge. I’ve also worked with several other people here in town that are worth mentioning like Charlie Frye of Metalcraft Fabrication, Brendan Alvistur who designed some gorgeous tap handles and Ezra Johnson-Greenough who created the logo just to name a few. 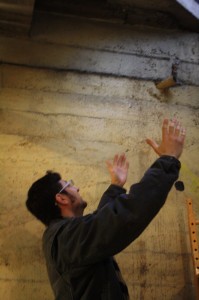 What has been the greatest challenge so far of getting this brewery off the ground?

AG: The design and construction phase of the project has been challenging in a time-management sense. Of course everything takes substantially longer than one expects but thankfully those days are just about behind us at this point.

What part of the experience are you most excited about?

AG: I started Upright because I love making beer, so getting up and rolling is very exciting. It really is a blast to brew, especially trying new styles and processes which I intend to do. 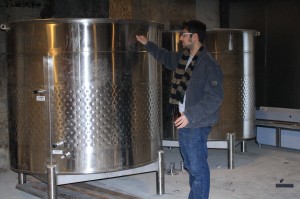 What size is your brewing set-up?

AG: We have a 10-barrel batch size with capacity for around 1200 barrels each year.

You are one of the few area breweries to use open barrel fermentation. Why did you decide to go with this set-up?

AG: My short time at Brewery Ommegang really sold me on open fermentation. You get exceptionally healthy yeast skimming from the top and the slightly more rustic quality as opposed to pressurized vessels attracts me as well. Plus it’s simply nice to see your beer fermenting. 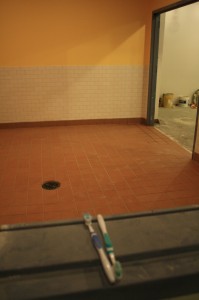 You are obviously a big jazz fan. What inspiration is behind the name Upright?

AG: Upright refers to Charles Mingus‘ primary instrument. His compositions are unique, straightforward and often beautifully balanced, traits that I hope to carry into our brewing here.

Do you plan on having a flagship beer?

AG: It’s safe to say that in Portland the hoppiest one will probably become the flagship although it would make me smile if our more sessionable wheat beer became the most popular as I plan to promote flavorful beers that aren’t too high in alcohol. 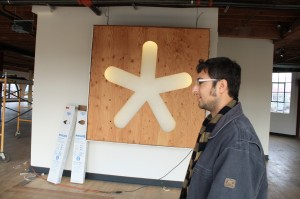 What is the first beer you are planning on making?

AG: The first brew will be the a variation of the aforementioned wheat beer that will be matured on cherries in used pinot noir barrels. After that we’ll start production of our four standard year-round beers along with single batches of a redwood smoked lager, a traditional old ale and perhaps a farmhouse inspired gruit.

Has opening up a new brewery in light of a rough economy and ridiculous beer tax proposals been a scary experience for you?

AG: The economy is out of my hands so I try not to worry about it but the proposed beer taxes do in fact bother me. Is it outrageous to expect our government to be content with what the beer industry has been providing not just in tax revenue but also economic growth? I certainly don’t think so.

What experiences from your past do you think will most benefit your work at Upright?

AG: I’ve had wonderful teachers and co-workers like Kevin Davis, Dan Pedersen and Vasili Gletsos, all of whom have shared lots of useful knowledge that comes in handy every day in the brewery.

You said you are doing 750 ML bottles in a Belgian style. Has the beer of Belgium been a big influence on your style?

AG: Yes the beer of Belgium has been a big influence. You really need to taste each beer on it’s own and the individuality found in many Belgian breweries cements that, although the same about individuality can be said about the United States now that craft beer is prospering again.

Big ups to Alex and Upright.  We look forward to getting down with his brews soon!