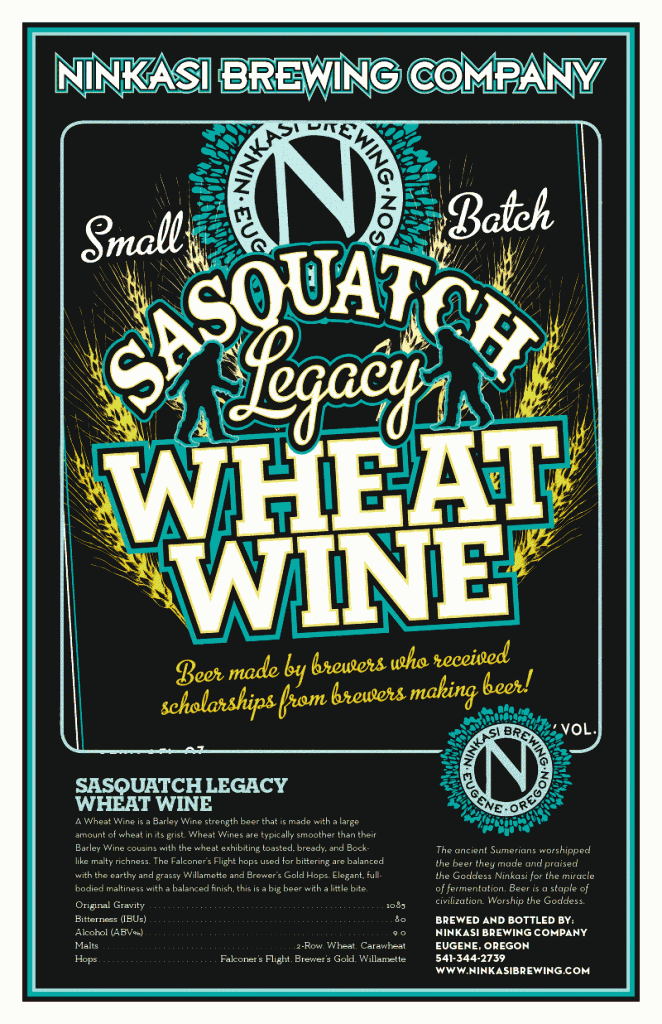 The Sasquatch Legacy Project, started by Walking Man Brewing and recently transitioned to Ninkasi Brewing, invites each year’s Glen Hay Falconer Scholarship recipients to collaborating on a beer together at Ninkasi Brewing. This year the Legacy beer is a Wheatwine.

Proceeds from this beer will go to support the Glen Hay Falconer Foundation and the Northwest Legends Foundation, whose mission is to educate brewers and support the community in memory of our lost brewing friend Glen Falconer.

Dave Pendelton of Dick’s Brewing, Brett Thomas of Silver Moon and Jason Carrier of Falling Sky – all 2011 Scholarship recipients – along with Chip Hardy of the Bier Stein, and Jamie Floyd from Ninkasi, came together to create this beer. The team brewed the Sasquatch Legacy Beer in memory of Mike West, a friend of Glen’s who started West Brother’s Brewing (among other places) who we lost last year to a heart attack. Mike was also known for starting Food for Lane County’s biggest fundraiser Chef’s Night Out. As a homebrewer (and at his brewery), he made a signature Honey Orange Wheat, so this wheat-based beer is in honor of his service to both Eugene and Bend!

A Wheat Wine is a Barley Wine strength beer that is made with a large amount of wheat in its grist. Wheat Wines are typically smoother than their Barley Wine cousins with the wheat exhibiting toasted, bready, and Bocklike malty richness. The Falconer’s Flight hops used for bittering are balanced with the earthy and grassy Willamette and Brewer’s Gold Hops. Elegant, full bodied maltiness with a balanced finish, this is a big beer with a little bite.

This year’s Portland Sasquatch Legacy release event will be held at Saravesa Tavern, 1004 N. Killingsworth St. on Saturday, July 7th starting at 6PM. A portion of proceeds will be donated to the Falconer Foundation.