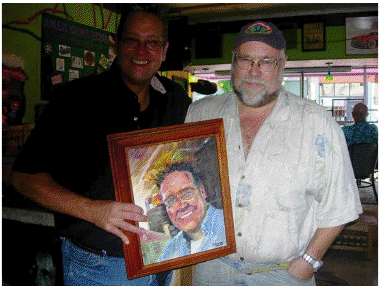 On Saturday we headed over to Plew’s Brews for an exclusive IPA weekend event titled Humulus Maximus Festivus. The crew at Plew’s were serving up more than 22 single, double, and imperial drafts of the famed style of beer that many of us particularly enjoy. When we arrived at noon, Trevor Thurston, the event’s organizer was busy loading in ice and coordinating volunteers who kindly donated their time to help make this event possible. I asked Trevor how the festivities went on Friday as we were unable to attend. He said it was pretty epic and proceeded to tell me that John Foyston from The Oregonian’s ‘The Beer Here’ painted a portrait of Randy Plew and presented it to him in person. I was told Randy was pretty emotional and felt extremely honored. Trevor stated that John had only painted two other portraits in his life. They were of the late, great publican Don Younger, who owned the legendary Horse Brass Pub.

We stayed at Plew’s for most of the afternoon and into the early evening as we were working. Fortunately we weren’t serving, which meant we got to partake in beer sampling. My very first taster was Ægir ‘IPA’ from Norway. I had to get a sample of their beer before it was gone. Trevor said it was the only keg to come into Oregon this year. Ægir Brewery was started in 2007 by American brewer, Evan Lewis. Lewis creates an array of standard, year-round beers as well as a rotating selection of seasonal/specialty beers. I checked out Ægir’s website. Their facility and location look amazing. The story behind the brewery’s name is also interesting. It’s worth a few clicks to check out. 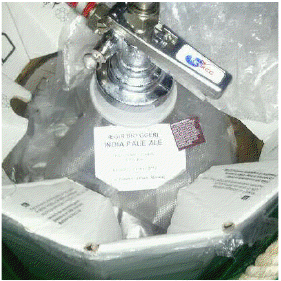 Back to beer tasting. As said, my first beer of the day was Ægir. I found it to be not as hoppy as I prefer, but it was very smooth and easy to drink. To me, it had an earthy, grassy smell, and it reminded me of an English IPA. I thought it was decent and I felt privileged to try it. I had several other beers throughout the afternoon and one made a lasting impression. It was Flat Tail Brewing’s ‘Herbed Double IPA Licentious Goat’; a beer that totally reminded me of focaccia bread. Not so much in smell, but in taste. It was certainly the most unique beer I’ve had in a while. I don’t think I could stomach a full pint, but in small doses it’s definitely doable and enjoyable. Other stand outs from the day were Fort George Brewery’s ‘We The People’, Black Diamond’s ‘Rampage’ and Humble Brewing’s ‘IPA’. I was hoping to try Shmaltz Brewing ‘Bittersweet Lenny’s RIPA’ but the keg ran dry on Friday.

Around 7:30 p.m. we decided to head home. We had a fantastic afternoon at one of the friendliest taphouses in town. I wish this place was walkable from my house. Plew’s always has a great tap line up, reasonable prices and nice mix of musical acts. The vibe is super chill and casual. It’s a great place to unwind, enjoy a pint, play a board game and spark up a conversation with your neighbor.