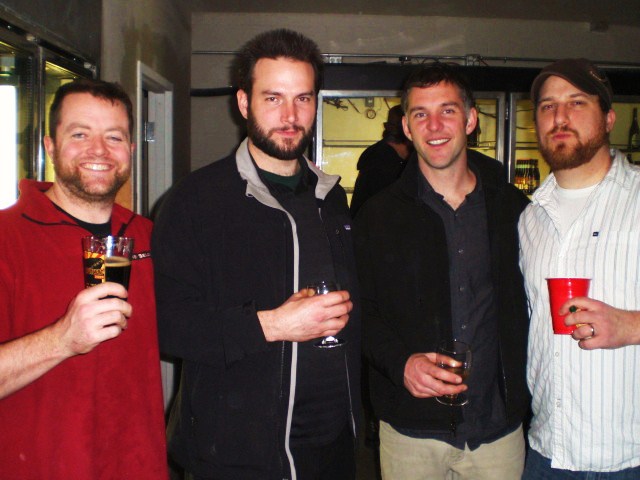 Another weekend has come and gone. This past one involved Spring-like weather in mid-February, something we are lucky to enjoy here in the Pacific Northwest. The cherry trees blossoming and several others budding made it clear that the coldest and darkest days of winter here are finally behind us. This lends itself to better accessibility to better beer. And, as you might expect, we took full advantage of this golden opportunity.

Friday kicked off with more of the same fantastic weather that would ensue all weekend long. The perennial crocuses made an appearance to soak up the warm sunshine along with a number of other budding plants that had remained dormant all winter. We enjoyed it the same, opening the glass facing on the screen door to let the warmth of this pseudo-spring in. 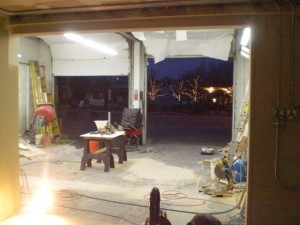 After enjoying the sunshine during the day, Friday night we went to the Portland International Film Fest. This great event showcases some of the best independent film-making from around the world. After a fun time at the fest, we visited our friend Jesse McCann at his soon to open Apex Taproom in SE Portland. Ezra’s New School Beer Blog had a nice write up earlier on Friday (here). This was the second time we’d actually gotten to look at the progress on Jesse’s new digs, and we have been anticipating it for quite a while. Located just across the street from our friends at The Beermongers, Apex is in a  great location, next to the hip new Los Gorditos Mexican restaurant. It has been evident of late that this emerging 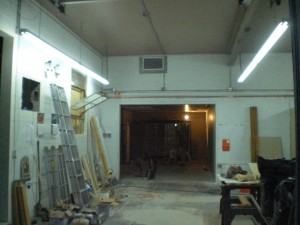 corner will surely be a hit in SE Portland. Apex, happily, will feature 50 craft beers on tap and has the cooler capacity for about 1500 bottles. The bar has not yet been built, but with the way things are going, an OLCC permit should be passed soon and things should be well on their way toward opening. Apex will also promote bicycling by offering about 60 parking spaces for the non-carbon burning commuters. The remainder of the lot will be utilized for outdoor seating, and a small portion will be set aside for a some motorcycle parking. Jesse’s involvement with New Belgium Brewing Company and love for bikes is evident and seems like a perfect fit for the spirit of Portlanders. 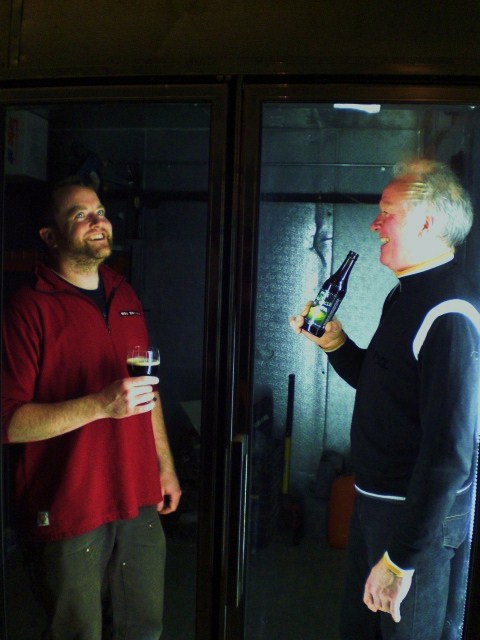 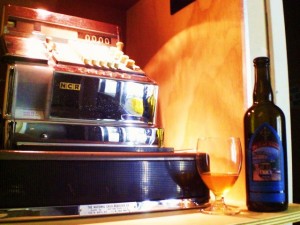 n artist who lives in British Columbia, has been in town helping with much of the work needed to get the new bar open. Friday was Dermot’s 60th birthday and a small group gathered to celebrate whilst checking out the progress of Apex. It was a sort of beer potluck with some delicious beers being shared. On tap, Hopworks Lager, and New Belgium Ranger served as delicious refreshers, and a selection of bottles were shared. One particular highlight was a bottle of Lost Abbey Cable Car, an American Wild Ale that is hard to come across. All the hype aside, this sour brew was incredible with a world of out of this world complexities. Brewmaster Tomme Arthur sure does put forth some spectacular beers, and this one was a true delight. Thanks to Renata for sharing! 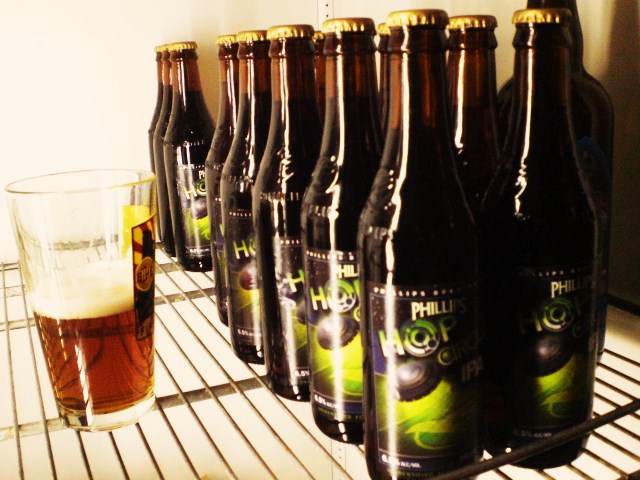 aps the highlight of the night besides just checking out the spot and gathering with other beer folks, was the appearance of Matt Phillips of Victoria, BC’s Phillips Brewing. According to Abram, Phillips’ Cascadian Dark Ale, known as Black Toque, is the first commercially released incarnation of the style. Friends with Dermot, Matt made the trip down with cases of his dankly delicious Hop Circle IPA. The beer possessed a citrusy fresh flavor that was very enjoyable. Thanks for sharing! 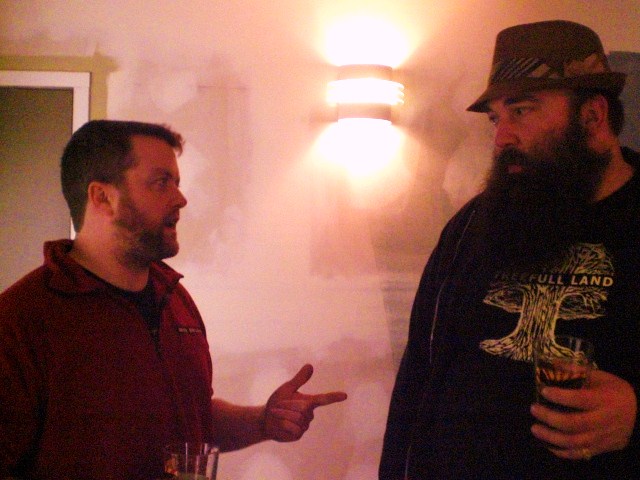 We are very much looking forward to hanging out at Apex with friends, playing some pinball, and indulging in a vast selection of killer brews. Kudos to Jesse and Dermot for a great atmosphere. We greatly look forward to frequenting Apex soon!

sun still on center stage, some spring yard work was in order. Pulling some weeds and hedging a bit while quaffing a few bottles of Samuel Adams Noble Pils and Deschutes Red Chair NWPA was on the agenda early on before heading out into the day to see what was doing. We met with the good folks at Bar Avignon to discuss our upcoming BrewPubliCrawl. On March 20th, SE Division Street in Portland will feature a pub crawl/meet the brewers event including the best beer bars on the rue and some of the best beers and their brewers in Oregon. More details to come soon, but one thing is for sure: Avignon offers some awesome craft beers on tap. An under the radar Full Sail Bourbon Wassail blend that was featured at the Holiday Ale Fest is currently flowing, as is a Walking Man Belgian Pale Ale, Ninkasi ESB, Fort George’s North III and Vortex IPA, Bear Republic Hop Rod Rye on cask, and the venerable North Coast Old Rasputin on draught. Owners Nancy Hunt and Randy Goodman’s great little tap selection is often overshadowed by their unbelievable collection of wines and spirits, but it is surely a classy spot not to be overlooked by a true beer geek.

After departing Avignon and enjoying affordable vegan entrees at Los Gorditos, we ventured north to Upright Brewing learn of a new collaboration beer between Upright’s Alex Ganum, Gerritt Ill, and Confucian Brewer Corey Blodgett. Another special one-off concocted specifically for the upcoming Portland Cheers to Belgian Beers event at Hopworks on May 1, 2010. The beer fittingly named Monk & Mingus will feature this year’s selected Belgian Farmhouse yeast and will be a strong dark farmhouse ale. Much of the secrets of this anticipated beer have yet to be revealed, but a great write-up on Corey Blodgett’s Confucian Brewer site is worth a read.

Northbound from Upright to Prost on Mississippi Street, much needed half-liters of Hacker-Pschorr Märzen and Radeberger Pils helped to refuel before trekking on to Killingsworth where we made a stop at one of our favorite bars, Saraveza. Here we enjoyed a variety of wonderful tasters including Russian River Supplication, Everybody’s Brewing Country Boy IPA, and New Belgium Beer de Mars.We met up here with Captain Neil Yandow of Belmont Station and made our way down the way to our main stop of the night. 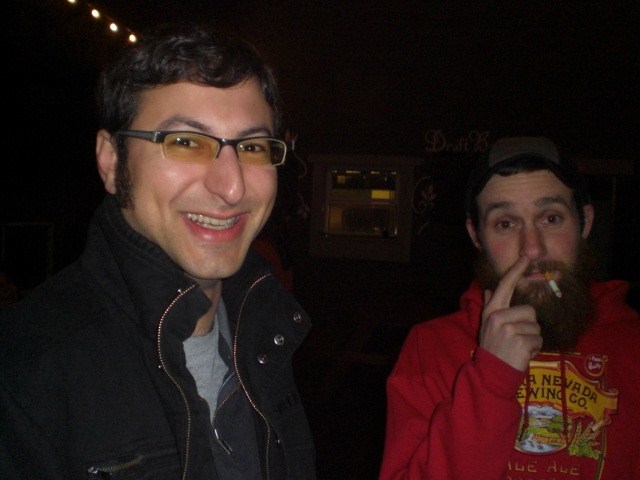 Saturday was Samurai Artist’s b

irthday party at the Hop & Vine, another top notch beer spot just down the street from Saraveza. In the back yard a fire burned warming us during the clear cool February night. Another beer potluck was underway. Rare bottles of commercial beer as well as delicious homebrews flowed. Highlights for us included Jimmy Blum and Ritch Marvin’s Cascadian Dark Ale collaboration homebrew, a bottle of Cascade’s tart Apricot, and Dogfish Head’s Palo Santo Strong Brown on tap. 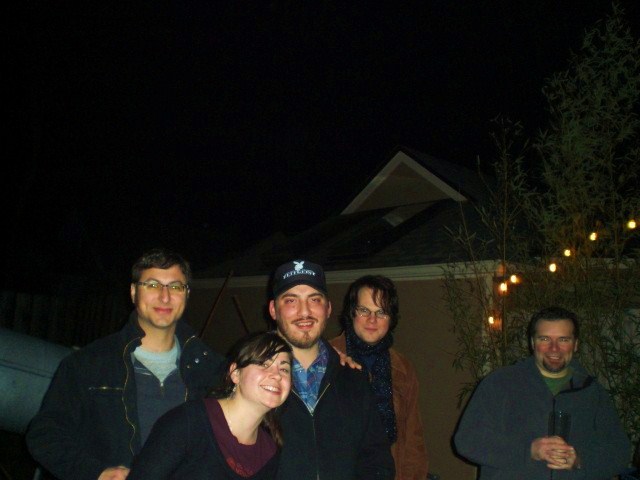 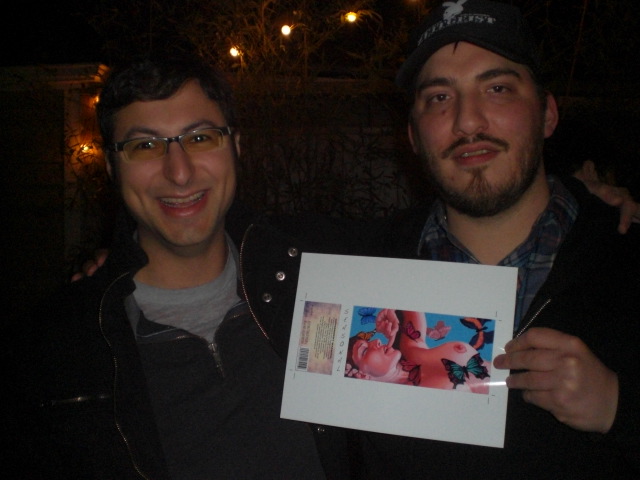 Lots of great beer geeks were in attendance for Ezra’s hoorah. Our pals Gordon “El Gordo” and his lovely wife Katie gave us a ride (thanks a lot!) back to Southeast. We visited our neighborhood pub, Victory, where a recently beefed up line-up of taps made deciding that much harder. Owner and head bartender Yoni Laos poured Widmer’s Deadlift Imperial IPA as well Delerium Tremens, and a delicious Wandering Aengus cider. It’s always nice to close out a weekend night at Victory. Look for them as a stop on our March 20th Division Street BrewPubliCrawl as well! 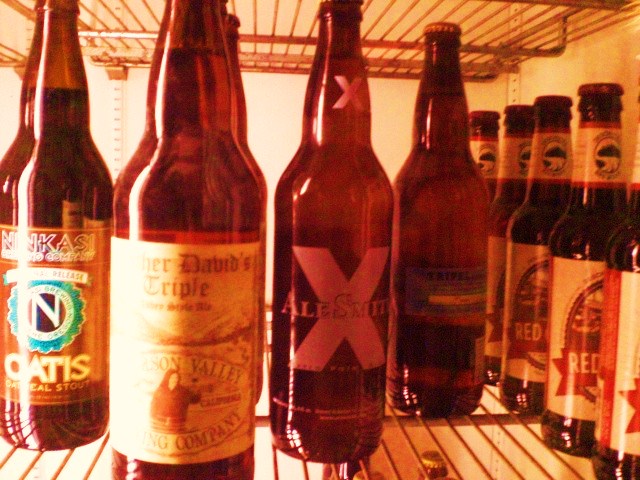