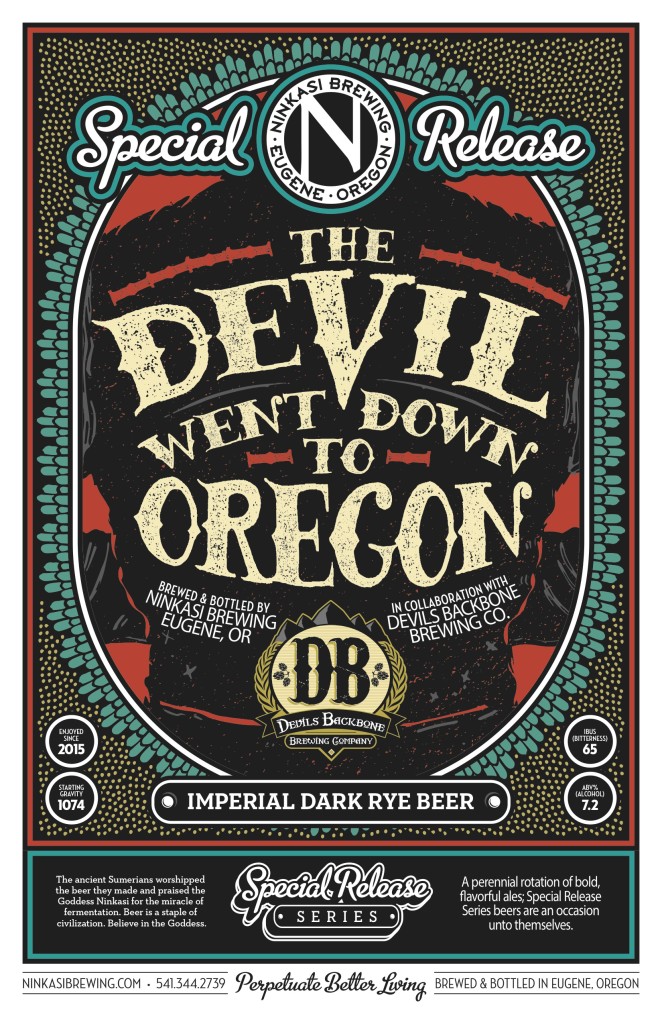 EUGENE, Ore.—Dec. 23, 2014— In a partnership spanning Oregon’s bountiful Willamette Valley to Virginia’s heartland, Ninkasi Brewing Company and Devils Backbone Brewing Company unite to offer a collaboration beer that is crisp, complex and a nod to a traditional German beer style. The beer, The Devil Went Down to Oregon, is an Imperial Dark Rye, brewed with West Coast-style hops, Dark and Crystal rye, and fermented with an Alt yeast strain.

“This beer offers a lot of complexity from start of finish and is unlike anything we’ve brewed before,” says Jamie Floyd, founding brewer and co-founder of Ninkasi. “The Alt yeast offers a slight hint of vanilla that opens to a spicy hop aroma. A sweet, malt flavor follows which lends itself to the drying, nuttiness of the rye and then is softened in the finish by the wheat and earthy, grassy and floral hop notes.” 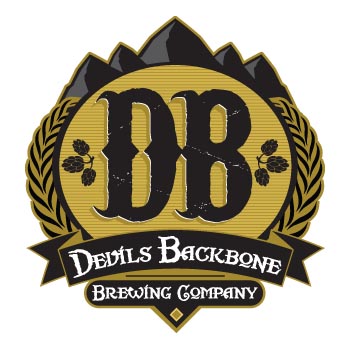 “I had, and continue to have, a huge amount of respect for Ninkasi,” explains Crandall. “We visited the brewery to gain some insight into how Ninkasi was successfully managing its growth; we learned a lot and have been able to use some of that knowledge as we grow our own brewery here in Virginia.”

This past year, Floyd also judged the 2014 World Beer Cup alongside Jason Oliver, Devils Backbone brewmaster. “It became clear that we shared a love for traditional brewing, especially when it comes to German styles of beer, along with a love of metal music, which is always close to my heart,” says Floyd.

“This beer was developed organically,” Oliver says. “We took an initial idea of brewing an Alt beer and eventually landed on a recipe that nods to a relatively unknown Old World German-style of beer, the German-Style Roggenbier, and brewed it with modern West Coast ingredients.”

“Collaboration in my mind should always strengthen friendships and this beer is a perfect example of how fun the process can be,” says Floyd.

The Devil Went Down to Oregon Stats
Description:
It might be a sin, but take the bet and you won’t regret this beer from start to end!

In a collaboration spanning Oregon’s bountiful Willamette Valley to Virginia’s heartland, Steve Crandall and Jason Oliver of Devils Backbone Brewing took the bet and gave the Devil his due when our founding brewer, Jamie Floyd, came ‘a-calling. What the trio first described as “a sort of West Coast, German-Style Roggenbier” turned into an Imperial Dark Rye, offering an elevated alcohol percentage and a crisp, lager-like finish from the Alt yeast fermentation. Give the Devil his due!

About Devils Backbone Brewing Company
Devils Backbone Brewing Company, the largest craft brewery in Virginia, and has won three consecutive Great American Beer Festival titles in the last three years with the Small Brew pub title in in 2012, Small Brewing Company in 2013 and the Mid-Sized Brewing Company title in 2014. The Company operates two breweries in central Virginia. Basecamp, which opened in 2008, is the company’s original brewpub and restaurant in Nelson County. The Outpost is a modern production brewery outside of Lexington. The company produces approximately twenty beer styles commercially, with many more experimental styles in production at Basecamp. Their beer is inspired by brewing traditions around the world. Vienna Lager, the company’s flagship, is one of the top craft brands in the nation, and continues to be one of the fastest growing. The company employs approximately 100 people, primarily at their breweries in Virginia. In the United States, Devils Backbone products are available only in Virginia, Maryland and Washington DC and they will move into North Carolina, East Tennessee and West Virginia this summer.