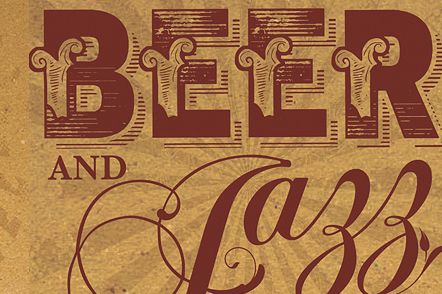 There’s something about enjoying a good craft beer while a needle picks up the vibrations of a well crafted horn solo.  For me, few things meld so perfectly.  Swirling a snifter of a great ale while diving head first into an Ornette Coleman record allows for a truly unique and sublime marriage of my two loves [album recommendation: The Shape of Jazz to Come on Atlantic Records, and At the Golden Circle Vol. 1 & 2 on Blue Note Records]. 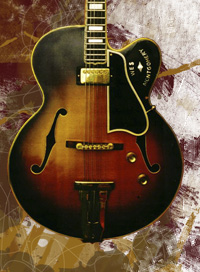 I remember my earlier times in Portland.  Just a mere handful of years back, sitting in the once jazz club, Blue Monk, enjoying a goblet of Chimay and tapping my foot to Ramsey’s Groove Trio.  Sadly, the Blue Monk is slated as a billiards and dart hall.  These experiences are fading fast, with a few exceptions remaining in Portland.  Jimmy Maks, the most well known proprietor of local jazz, offers a modest craft selection.  But you have to put up with the middle aged Pearl crowd that at often times, seem like they’re just checking another thing off of their list.  Produce Row still offers Jazz with Ron Steen on Mondays.  This casual happening begins at 9pm, and with Produce Row’s tier of craft brew and whiskey combos you can’t go wrong.  For now, you have to wait for Produce Row to reopen their doors while they are renovating their space.  Expect libations to start pouring on June 5th.

Tug Boat Brewery, located downtown, across from the uber cool Bailey’s Taproom, also offers live jazz.  Unfortunately, nothing much is to say about their beer, but if you do make it in, try their Chernobyl Stout.  I have seen acts ranging from organ based soul jazz, to mind bending avant-garde musicians in this quaint, library-esque style atmosphere.

If you’re a homebody, and craving to spin that new original Blue Note LP that was just purchased at Mississippi Records, try a bottle of North Coast’s Brother Thelonious Ale.  In my opinion, one of their best offerings.  Enjoy this delicious Belgian Style Abbey Ale while knowing you are supporting The Thelonious Monk Institute of Jazz.  An organization that implements the growth of Jazz education in public schools and college level musicians.  If that’s not enough for you, a CD of the Brother Thelonious Quintet is available for purchase.  This recording offers cuts by five alumnus who benefited from the Monk Institute.  If you’d like to show off your affinity for jazz and brew, glassware and wearables are available through North Coast’s online retail store. 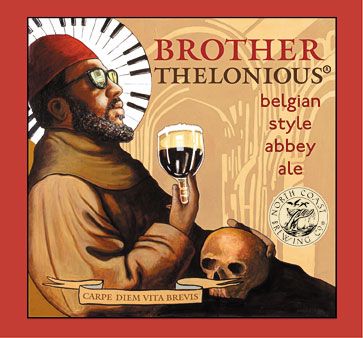 Brother Thelonious contains a solid 9.3% abv.  A stiff ale to perhaps go with those heavy Cecil Taylor piano chops [album recommendation: Jazz Advance on Blue Note Records].  Available in corked 750ml and in four packs.  Either way, great for sharing.  Just like the great bebop prince himself, this beer is full of personality and character. Poured from the bottle into a Trappist glass, it has an almost opaque, dark ruby, red hue with a beige head. Faint aromas of malt and brown sugar. Sharp palate with a lot of carbonation and flavors of toasted malt, sour fruit and other sweet characters. Slight chalky, metallic finish with a presence of alcohol warmth.

Another Northwest offering is Rogue’s Jazz Guy Ale.  A name rendition of the popular Dead Guy Ale, this packaged 22oz plays tribute each year to one of the best Jazz festivals in the nation.  This year showcasing Portland Jazz Festival’s Artistic Director, Bill Royston.  I buy a bottle of this each year to support the sponsorship and growing relationship between these two.  Thanks to PDX Jazz, I have seen masters like Ornette Coleman, Bobby Hutcherson, Lou Donaldson, and Pharoah Sanders.  Last year the labels sported a guitarist, and the year before displaying a double bassists.  Unfortunately, in a very Rogue fashion, the contents are just a rebottling of their American Amber Ale.  The festival occurs every February, but bottles may still exist at Rogue Ales Public House on NW Flanders.  You can see some of my 2008, 2009, and 2010 features of the festival from my blog, This Shape of Jazz. 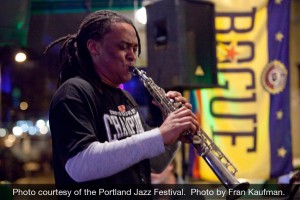 Alex Ganum’s Upright Brewery was named after bassist, composer, and band leader Charles Mingus.  There’s nothing I need to say about this solid Portland brewery that hasn’t been mentioned on other wonderful beer blogs.  Their tasty farmhouse style brews often have musical references in their titles, and this years Cheers to Belgian Beers offering was called Mingus and Monk.  In collaboration with Corey Blodgett, this strong, dark farmhouse ale was aged in Pinot barrels with Port-soaked, roasted currants.  At the PCTBB, this beer poured poured a dark, tawny ruby/brownish with a white head. Aroma consisted of wine-like, grape and berry characters. The barrel aging lent to a dry and tart mouth feel with flavors ranging from a nutty/cocoa character that meshed wonderfully with dark fruit — similar to plum and grape notes.  I think everyone agrees, this will only get better with age.  Am I the only one hoping for a bottled version?

No doubt that Monk and Mingus were huge players since the post-war era of jazz [album recommendation: Criss-Cross by Monk on Columbia Records, and The Clown by Mingus, on Atlantic Records].  Both individuals were relevant in bebop, however Monk didn’t stray far from bop for the rest of his career.  And why should he?  With some of the best written jazz compositions under his belt.  However, Mingus really found a groove with the new sound; and ultimately, a totally unique aesthetic to his ensembles.  His music created a huge umbrella touching on world music, the avant-garde/free jazz, social commentaries, classical — all while retaining hard bop elements.  Someone once told me, that they enjoy Mingus, except for the parts where the “band sounded like they were falling down a flight of stairs.”  Those are the sounds I live for.

I would love to see some new beers named after jazz compositions — “Fables of Farmhouse,” “The Shape of Ale to Come,” “Kind of Pale Ale.”  Mingus was the bridge between bop and the avant-garde. He encouraged freedom in improvisation, and like Coltrane, wanted to get to the roots of jazz while creating something new.  In a way, this could be a metaphor for the unique ales that Upright is producing.  Breaking from the Northwest hop dominant ales with their own takes on rustic farmhouse styles.

Matthew DiTullo is a beer and wine geek. To find out more, you can email him at matthew@brewpublic.com