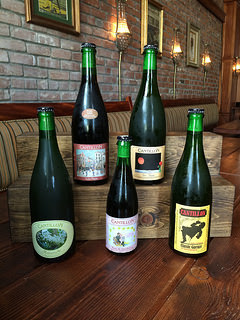 If you’re a fan of Belgian beers you will definitely want check out the Bad Habit Room on Sunday, November 2nd as they host a very special sampling of beers from Belgium’s Cantillon Brewery. Taking place in the space behind Saraveza, the Bad Habit Room will feature some rare Cantillon beers hosted by Bad Habit’s  in-house vintage guru, Tyler Treadwell from 4:00 to 6:00pm.

For the $30.00 entry fee, this will allow one to receive a flight of five Cantillon beers, plus a sampling of handmade snacks. Tickets are very limited and only available for purchase here, so don’t miss your chance to partake in these coveted brews!

The five featured beers include:

There’s more upcoming vintage beer news from Saraveza as they will be having an online-only (in-store pickup) Bruery Christmas vertical for sale this winter!

Saraveza will be offering the 2008 Partridge in a Pear Tree, 2009 Two Turtle Doves, 2010 Three French Hens, 2011 Four Calling Birds, 2012 Five Golden Rings, and the 2013 Six Geese-A-Laying. Saraveza will only have two verticals for sale. Stay tuned for pricing and further details.