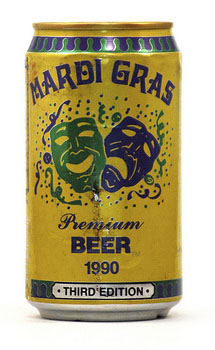 Today is Mardi Gras, which is French for Fat Tuesday, the culmination of the Mardi Gras celebratory period. For Roman Catholics and many other Christians, this is the last day to feast and enjoy a beer or two before 40 days of the fasting and prayer before Lent commences on Ash Wednesday. For many others, it’s just one heck of a party. We’re guessing many of you won’t be taking a 40 days respite from craft brew quaffing, but hey, might as well act like you are and enjoy Fat Tuesday a little. Here’s some ways to celebrate:

1. If you’re in the Portland area, check out some of the goings on around town, these include:

2.  Go to your favorite bottle shop and pick up a bottle of Louisiana craft beer from Abita. Their Jockamo IPA is named for the tribes of dancing, singing, elaborately costumed “Mardi Gras Indians” who have marched during Mardi Gras for over 250 years. This 6.5% ABV traditional IPA even has a local connection because its hopped and dry hopped liberally with Willamette and Columbus hops from the Pacific Northwest. Should pair well with some Gumbo.

3. Pick up a king cake to share with friends and see who gets to be king or queen for the night. Hidden inside a proper king cake is a plastic baby or a bean. Finding this in your slice makes you  king or queen for a day and also responsible for providing the next cake. Pair with craft beer of your choice.

4. Enjoy some Southern food paired with a good craft beer.

5. Put on some New Orleans music to enjoy with your Abita or other craft brew. The traditional Mardi Gras classics are fun, but check out some contemporary sounds from bands like Galactic too.

Post in the comments if you have any other suggestions or good beers to recommend!