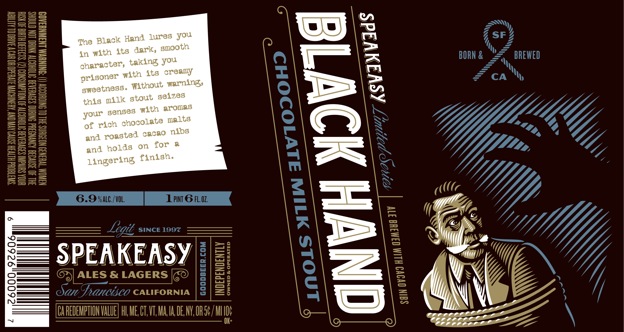 “There just didn’t seem to be a whole lot of milk stouts out there,” said Brandon Borgel, the brewery’s Director of Sales & Marketing. “We’ve done a few pilot batches in the past and we’ve absolutely fallen in love with the style. It’s a nice departure from the hoppy, West Coast-style beers that people have come to know and love from us.”

The brewery teamed up with Brad Kintzer, Head Chocolatier at San Francisco’s TCHO Chocolate, who recommended a special blend of Ecuadorian cacao nibs, which lend a subtle nutty character. The coarsely ground raw nibs are added twice in the brewing process, and provided incredible depth to the chocolate-y flavors and aromas.

“We were looking to create distinct milk chocolate flavors not only with the addition of raw chocolate, but throughout the recipe of the beer as a whole,” said Brewmaster Kushal Hall. “We added lactose to create a creamy body and natural sweetness to the beer, oats to accentuate the silky mouth-feel, and de-husked chocolate malts to provide a so!er flavor without too much bitter roast.”

The term “black hand” refers to the Prohibition-era practice in which mobsters would stamp the kidnapped victim’s handprint on a ransom note. As a nod to that history, Speakeasy hid a secret note in the design of the screen-printed bottles, which they are daring their fans to find. “If you should find it, you’ll know exactly what to do,” says Borgel.

The Black Hand (6.9% ABV, 37 IBU) will be available on shelves in 22oz bottles and on draft January through March. Visit the brewery’s website at goodbeer.com for more information.

ABOUT SPEAKEASY ALES & LAGERS
Since 1997, a wily band of bootleggers were inspired to bring their exceptional brews from the underground to the masses, defiantly producing small batches of beer in a secret warehouse in San Francisco. Starting with a single, iconic beer—Prohibition Ale—Speakeasy now brews a wide array of acclaimed beers including Big Daddy IPA, Payback Porter, Double Daddy, Scarface Imperial Stout and many more. Now distributed across the entire West Coast and major markets across the country, Speakeasy has grown by leaps and bounds, yet still produces many of their beers on the same hand- cranked, steam-fired brewhouse that started it all.

ABOUT TCHO
TCHO has been cra!ing chocolates in San Francisco’s historic downtown waterfront since 2005. TCHO works with cacao bean farmers and cooperatives to improve growing, fermentation, and drying methods through its TCHOSource program.