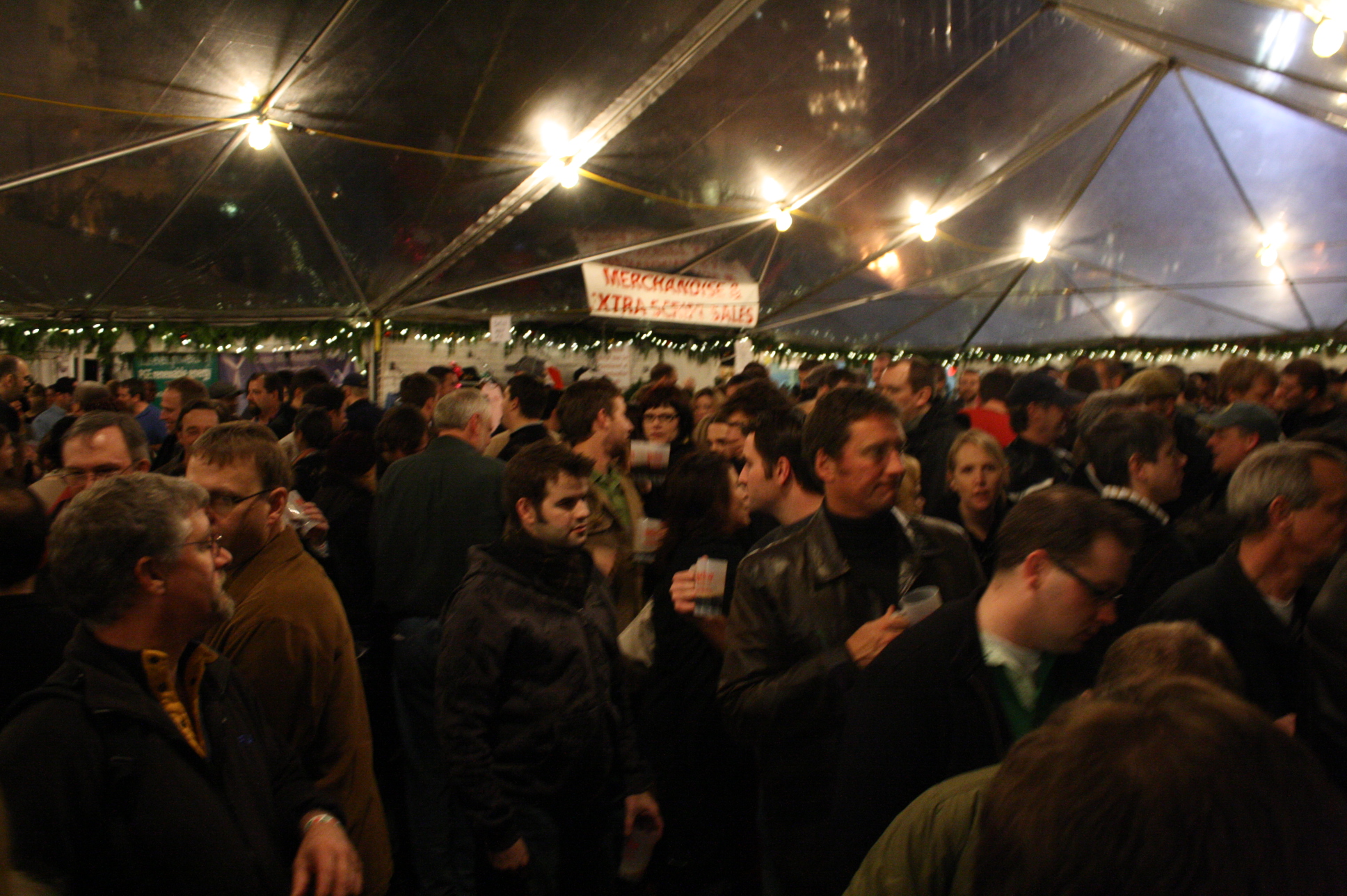 Can you believe that it is already December?! Seemed like just yesterday we were geeking out on fresh hop brews, and not too long before that, the Oregon Brewers Festival brought a grip of interesting brews to the forefront. Well, time flies when you’re having great craft beer, and here we are again, and as expected, things don’t really ever taper off in Beervana. In fact, this time of year, the bigger, bolder, and more demanding brews light up the long periods of dark and warm the hearts of Northwest palates as the days grow colder.

As you should know, the Holiday Ale Festival kicks of Wednesday December 2 at Portland’s Pioneer Court House Square and is undoubtedly the bigges

t and best winter beer festival on the West Coast, which basically means it is the best cold season beer festival anywhere in the country. Not only will there be more than 50 beers pouring, but these beers are mindblowing, liver-bending, and utterly ballsy. Under the tented canopy where its warm and spirits are jovial, you can count on getting your ass kicked if you try to drink all the beers in one setting. That is why the organizers (God bless their souls) have extended the weekend to a five day blowout. If you thought thanks giving had your insides challenges, just wait til this wreckin’ ball of malty fun swings through.

Those of you who have made a point to attend each year have recognized the event’s expansion: more beers, more taps, more room, more fun. This year, in addition to the slough of killer beers on display for your quaffing pleasure, the Holiday Ale Fest crew has dug deep into the cellars to extricate additional rare aged kegs from years past. Starting on Wednesday December 2nd at 2pm, limited release brews will rear their heads for the real geeks periodically throughout the festival. Included in this exclusive list is a 2005 Samichlaus, 2007 and 2008 vintages of Hair of the Dog’s Jim K blends, a 2003 Bridgeport Knucklehead,  2008 Alaskan Smoked Porter, 2006 Allagash Curieux, 2007 Scaldis Noel, 2007 Cascade Baltic Porter,  2006 Walking Man Ho Ho Homo Erectus, and others. This is just the tip of the iceberg!

For those of you who simply can not wait until Wednesday for the Holiday Ale Festivities to begin, the brewer elves at New Old Lompoc have been working diligently for a special release of not one, not two, not three, but six freakin’ different seasonals. All of these winter charmers are dropping at 4pm on Tuesday December 1. Here’s what to expect:

A refreshing, crisp golden ale, Blitzen is dry hopped in the conditioning tank with coriander, orange peel and Crystal hops, which give the beer a floral aroma and a slight spicy flavor. 5% ABV.

This Belgian style red ale features a malty and creamy body. Brewed with the Belgian Ardennes yeast strain, it boasts a mild fruitiness and a spicy clove character. 7.9% ABV.

This is the popular C-Note’s big brother. It has a caramel malty body with an extremely intense hop profile. Brewed with all seven of the “C” hops – Crystal, Cluster, Cascade, Chinook, Centennial, Columbus and Challenger – it has a piney, resiny flavor. This is the only Lompoc holiday beer sold in bottles. 8% ABV.

This porter has a malty body and a soft roastiness in the nose. An addition of vanilla beans was added to the brewing process, giving the flavor a unique finish. 7.5% ABV.

A dark, German style Bock with a super malty aroma and flavor, balanced by roastiness and a touch of hops. 7.9% ABV.

A very intense strong ale with a malty body and plenty of caramel, dried fruit and roast flavors. This is the ideal beer to keep you warm on a cold winter’s night. 9% ABV.

In addition to these half a dozen winter warmers, Lompoc is releasing what they claim is Portland’s first beer brewed for Hanukkah dubbed “8 Malty Nights.” A chocolate rye ale brewed by Sam Orlansky, the libatoin was blessed by Rabbi Bradley Greenstein from the Congregation Neveh Shalom who also blessed the brewers, raised a glass of Manischewitz and toasted “L’chaim!”  This special beer will be released on the first day of Hanukkah, Dec. 11, at the Lompoc Sidebar from 4 to 9 p.m. See you there!