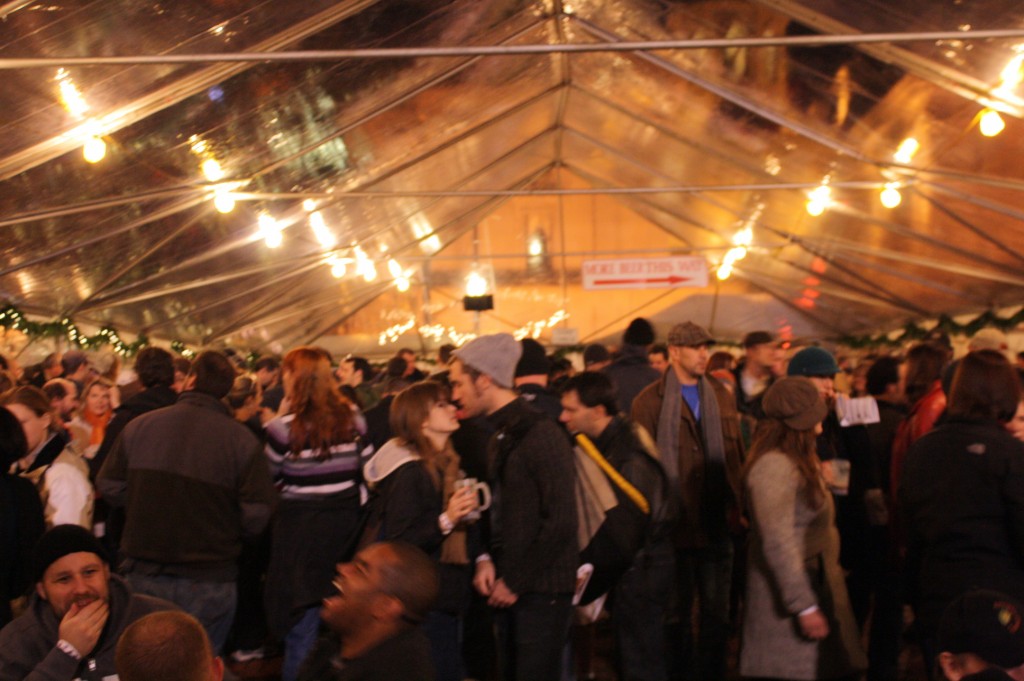 Gol-ly! Just when you thought a beer festival could get no bigger and better, the Holiday Ale Fest continues to wow. Starting a day early this year, many of the real “heads” hit the tents early to get first dibs on a variety of high octane adult beverages brewed with utmost care, many of which were aged to perfection.

The lead dogs at the event Preston Weesner and Chris Crabb have been working diligently for months in preparation to give craft beer lovers a one-of-a-kind experience featuring beers that folks will never see the likes of again…well, until next year.

At Wednesday’s kick-off we were lucky enough to attend a special media tasting that included a sampling of some of the most anticipated offerings at the event. Weesner refrained from delving too far into descriptors, but hearing him speak about beer reveals a man with a true passion much like an accomplished art critic speaks of many masterful works. 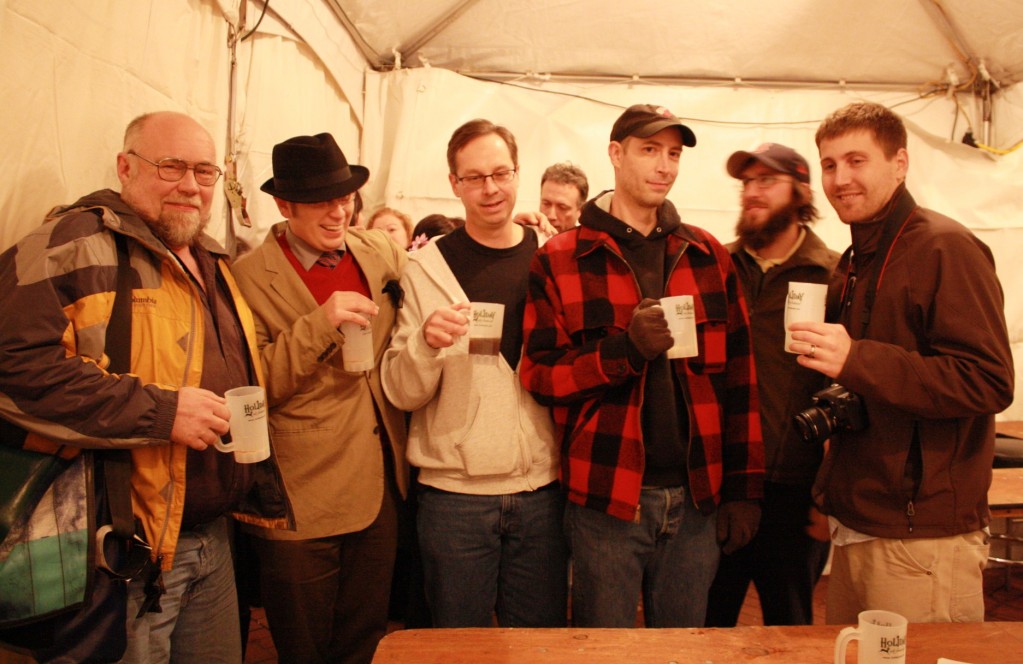 First up, Bear Republic’s Barrel aged Old Baba Yaga–not only possibly the best named brew at 2009’s hoorah, it appeared to be this year’s people’s choice for the unnamed “buzz beer.” Out on the floor, everyone seemed to mention it when asked what they might recommend, and we had to concur. Aged in Cabernet barrels, this brew, named for a witch who guarded the fountain of life and death and held dominion over a wintry landscape, held domain over the festival with a blackhearted presence superseding most imperial stouts. Flavors of French oak, coffee, chocolate, and lots of grapes and hops domineered the palate’s landscape. 11.5% ABV, 110 IBU. Wow!

Full Sail Wassail Holiday Blend: Full Sail brewers  at last created a commercial blend that really does impress. Whereas the brewery often brings a dry-hopped version of their Wassail winter warmer, this year they truly stepped it up. Said Weesner “I’ve asked them every year to try something else. I pestered John (Harris) and Jamie (Emmerson) tirelessly, and at the last minute they called and said they’d had an epiphany. Maybe something went wrong; maybe something went right but they blended off something special.”  A blend from two of their favorite beers: Imperial Porter aged for nine months in Makers Mark casks, and freshly filtered Wassail. “The nose is Wassail’s green hop perfume washed with oak and hints of Bourbon, while the palate is full-bodied with elements of dark fruit, espresso …and caramel, all finished with a long clean hoppy bitterness.” Weesner continued “We are truly happy, thrilled, and blessed to have this (beer).” 7.8% ABV, 60 IBU.  If you like complexity and a lot of oak, this brew is for you. 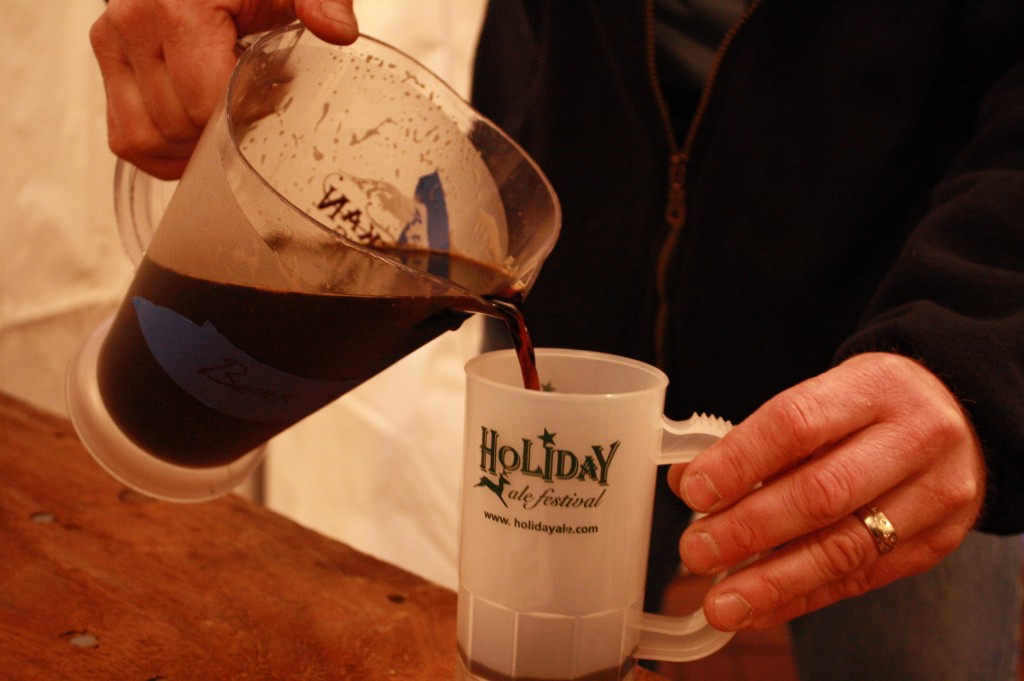 Also at the initial tasting, we revisited Fort George’s North III. We were fortunate enough to enjoy this wonderfully unique beer at Bar Avignon not long ago. This one truly is the Sugar Plum Fairy Beer. Employing maple syrup and honey converted by a Belgian yeast strain, the beer also sat in the brite tank with approximately 60 pounds of finely chopped sugar plums. Deep and very dark unlike most modern day trippels, this is a beer that exemplifies Fort George brewer Jack Harris‘ unconventional and undeterred approach to brewing. “What ever Jack wants to do…” said Weesner before instructing us to “Put your warm meaty paws on there and swirl it around.” Fruity, rich, spicy wood textures with a most distinct play of ingredients. 8.8% ABV, 50 IBU. This beer really has something for everyone and it’s explorative nature is quite welcoming for those who appreciate beer with a don’t-give-a-damn attitude. 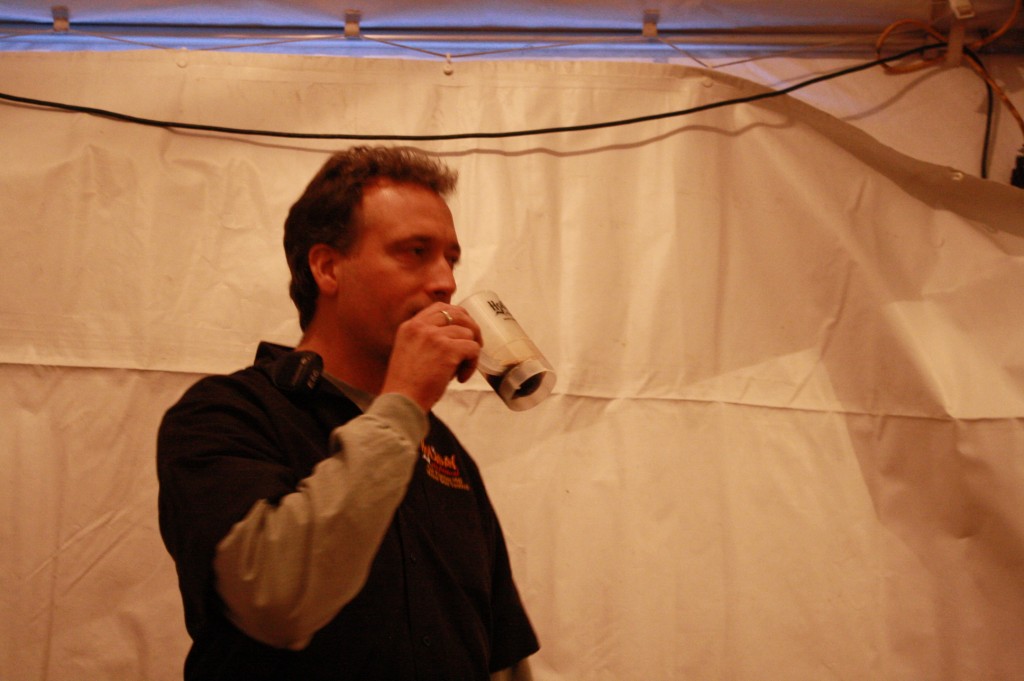 Hair of the Dog Jim ’09 was a beer in a series of beers that Weesner had a stake in helping to create. He and brewer Alan Sprints concocted this perennially changing blend to honor the late Jim Kennedy who Weesner refered to as the “Johnny Appleseed of beer” and “one of my most respected heroes in the beer world.” Each year the version of Jim K. changes. Weesner related this to the man, myth, and legend himself. “Every time we’d see Jim he was different so we wanted to make a beer that changed as well.” Described as a barrel aged olde ale, this year’s rendition of the brew combined HOTD Doggie Claws, Adam, Fred From the Wood, and Blue Dot as well as a keg of English brown ale, German Bock, and American strong ale. Further, the blend was toasted with a bottle of Cantillion St. Lamvinus, Scaldis Noel, Corsendonk Christmas, and Orval. This one definitely takes the cake for most “out-there” brew. The fantastic number of important beers that went into making Jim K. is reminiscent of what you might find in a dedicated craft beer drinker’s gut after, well, a great beer fest. 10% ABV. “Jim was instrumental in telling a lot of the brewers back in the early days to keep doing what they were doing.” said Weesner. All raised a glass to Jim Kennedy and the beer made in his memory. Limited pours of the 2007 and 2008 incarnations of Jim have been made available at the Holiday Ale Fest, but don’t count on them to last long. 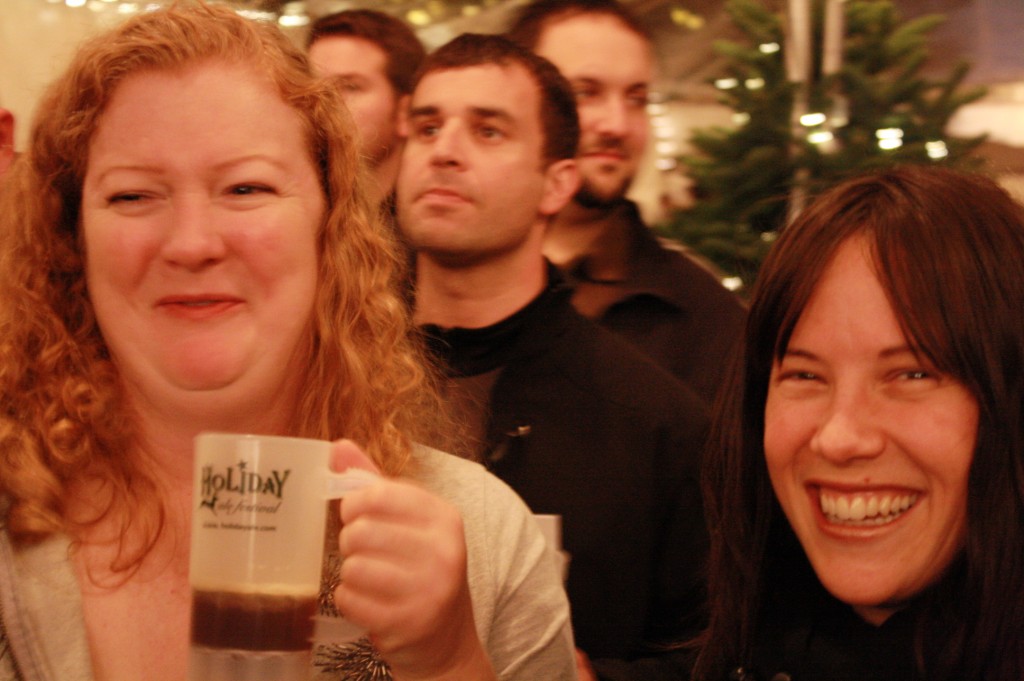 All of the beers at this distinct tasting experience made a the geeks froth at the mouth like a movie buff finding his favorite out-of-print flick on Laserdisc. The Lost Barrel of Deschutes Mirror Mirror Barley Wine from Deschutes was no exception. Somehow a few kegs of this “accident” were uncovered at the Bend brewery. “I’ve lost car keys” said Weesner “Recently I lost my phone. But I’ve never lost a keg.” This straight-from-the-barrel 2009 brew at HAF is about half of what was recovered. The other half is at the brewery and you may be able to get you buds on it if you choose the right day to wind up in Bend. If you’d rather not risk missing that, then get yourself down to the fest pronto. 10.7% ABV, 51 IBU.  After a full mug of this one, you’ll think you’re the fairest of them all. 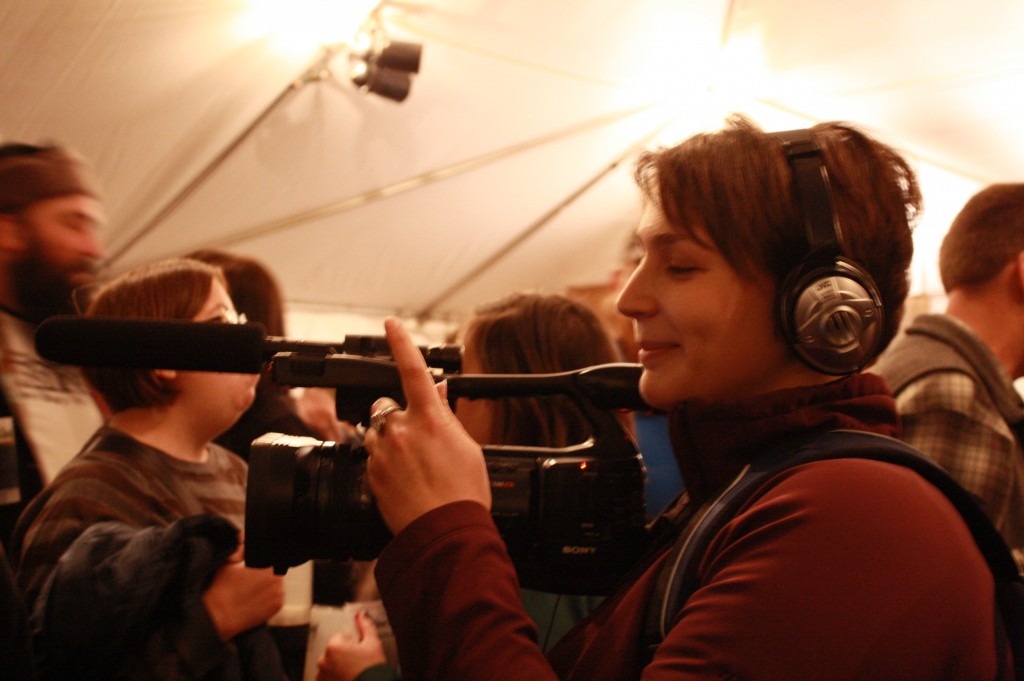 After we quaffed the remaining sample of Mirror Mirror, we delved into some of Hair of the Dog’s Jim ’07 to which Weesner said: “This is my benchmark for what Jim could be. Lots of Adam. Alan’s (benchmark Jim) is th ’06.” Currently there are no more known Jim ’06 in circulation anywhere. The ’07 Jim blended Hair of the Dog’s Adam, Fred, Doggie Claws, and some German Pilsner. Special bottles added included a 1989 Thomas Hardy, a 1991 Rodenbach Alexander, and a 9-liter bottle of the 2006 St. Feuillien Triple. Following all of this, the blend was barrel aged for six weeks. 10% ABV. Boo yah! 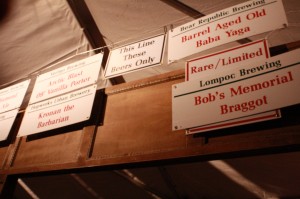 Our final tasting before hitting the floor was perhaps the other “buzz beer” of the event. Any fan of sours will likely wet his pants over this one. Noneotherthan Cascade’s 2009 Drie Zwarte Pieten “Sang Noir.” Weesner precursed the pours of this by saying “You are gonna get your palates blitzed.” Amen, brother. He also referred to this particular blend as “the ultimate melange” without any disagreement. In serving up this utopic blend he referenced Cascade’s brewmaster Ron Gansberg who has been making beers of all varieties for more than twenty years. “Ron has one of the most eclectic collections of crazy beers.” he said. “Mathematically speaking his ability to blend countless varieties of beer is unfathomable.” Big words, but backed by an even bigger beer blend. Utilizing flavors of whiskey barrels, Pinot Noir, and port barrels while meshing Gansberg’s Double Flanders Red Ale, Double Red with Cherries, the notorious Bourbonic Plague, Spiced Vlad the Imp Aler, Blonde Quadruple, and more. Weesner added “Ron reached in his arsenal for what he wanted. Curtis (Bain) was reaching for what he wanted. This is a seven barrel blend plus. 10.2% ABV, 5 IBU. Count on this one being ixnay before Sunday. Thinking about this beer makes us want to perpetually smile whilst puckering. Servus! 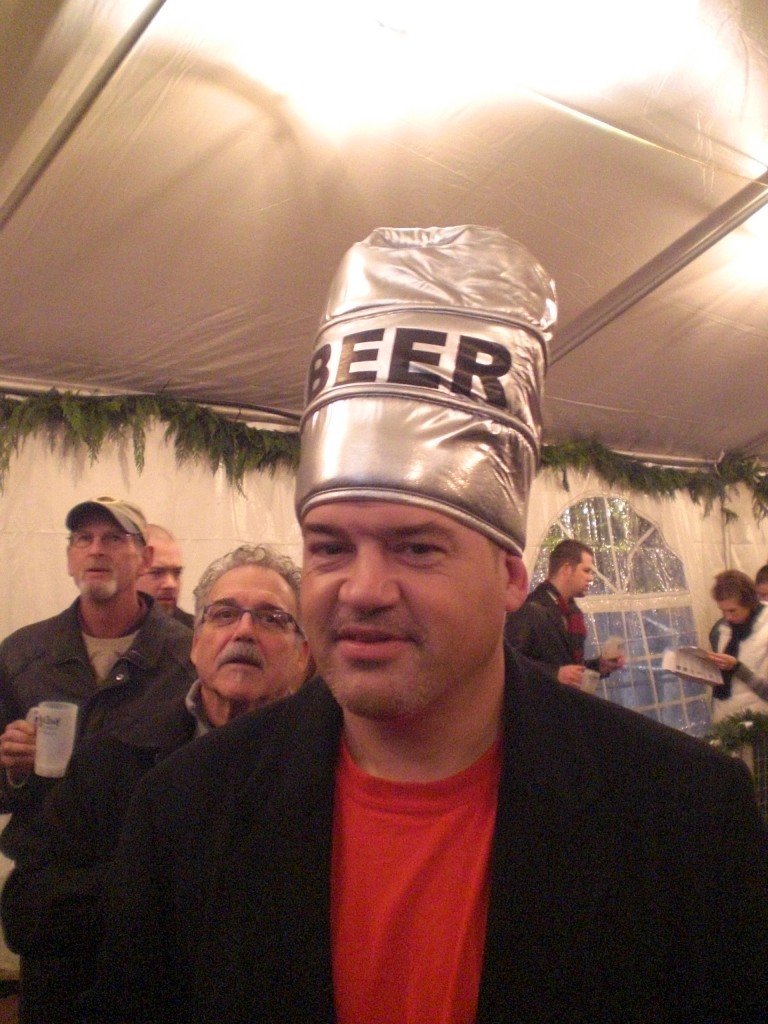 So there, you have it. A few of the many excellent beers experienced at this year’s Holiday Ale Fest. It’s a good thing the event lasts five whole days because the vast biggies really do demand time, especially if you plan on remembering them. Kudos to the organizers for delivering a truly amazing event. You really don’t know how lucky you have it here in Brewtopia!