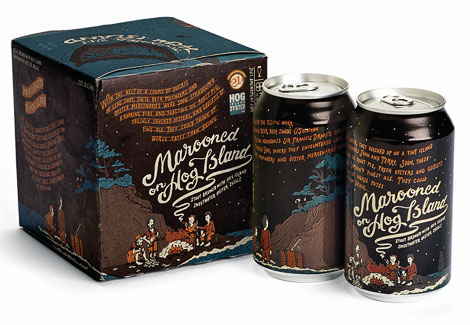 SAN LEANDRO, CA (November 1, 2015) – Life on an English galleon was no place for weary deck swabs. Legend has it that centuries ago, two such men abandoned Sir Francis Drake’s ship off the coast of Marin county and bobbed to shore clinging to a few casks of the captain’s finest ale. Washing up on a tiny island in Tomales Bay, they encountered a pair of local oyster farmers. Marooned together, these beer mutineers and oyster mercenaries created a rare and legendary beer that they called, simply, the Oyster Stout.

“It may not exactly be true, but it does make a good story,” says Nico Freccia, 21st Amendment co-founder, of the tale spun on the brewery’s reborn oyster stout collaboration four pack. “Oysters and beer have long been a perfect pairing, but we wanted to combine the two in a truly local collaboration for a great beer with a great story,” Freccia added. Brewed with Hog Island Oyster Company, Marooned on Hog Island oyster stout will be shucked into cans on November 13, making its return for the first time in three years.

“Like us two beer geeks that founded 21st Amendment, Hog Island Oyster Company is a local grower of oysters founded by two passionate guys, John Finger and Terry Sawyer, and is synonymous with the good food and locavore community,” says 21st Amendment co-founder and Brewmaster Shaun O’Sullivan. “We used to go down to the Hog Island oyster bar in San Francisco’s Ferry Building, and sit eating oysters and sipping beers while they collected shells and brine for us to make this beer. The salinity in the brine and the calcium of the shells are necessary ingredients in the brewing process and deliver a silky, slightly salty enhancement to this stout. And thanks to the recent opening of our new San Leandro brewery we’re excited to spread our wings and start experimenting again, introducing new beers and bringing back classics like this.” 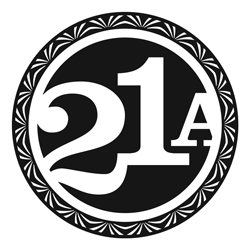 The rich, midnight-colored dark stout  has an ABV of 7.9% and is brewed with Magnum and Willamette hops and several types of malts including Crystal, Carafa, Chocolate and rolled oats, but the special ingredient is 200 pounds of Hog Island Sweetwater oyster shells in each batch, a salty addition that complements the sweet caramel, chocolate and roasted coffee mouthfeel. The beer is best enjoyed alone or with a plate of your favorite oysters.

“We love doing projects with like-minded people,” said John Finger, co-founder of Hog Island Oyster Co. “We’re all about producing a great quality product and having fun, and so are Shaun and Nico, which was part of the reason we were excited about this collaboration. Beer and oysters is a perfect pairing, and the guys perfected the incorporation of our oysters into their beer.”

Marooned on Hog Island and the magical partnership between two beer geeks and two oyster farmers is all thanks to a sunny afternoon spent slurping oysters and sipping stout while overlooking the Hog Island grounds on Tomales Bay in Marshall, CA.  The beer hits shelves on November 13th in all of 21st Amendment’s current distribution territories and will be available for a limited time. Pick up a pack in CA, OR, WA, AK, ID, MN, OH, ME, NH, VT, RI, MA, NY, NJ, DC, DE, MD, PA, VA, GA, NV, NC, SC and IL, and keep your eyes peeled for more variety packs to come! For up-to-date availability, events and promotions, visit www.21st-Amendment.com.

ABOUT HOG ISLAND OYSTER CO.
In 1983, two young marine biologists, planted oyster seed on a five-acre lease in Tomales Bay. A year and a half later, they delivered their first Pacific oysters to Chez Panisse, Zuni Café and Hayes Street Bar and Grill in San Francisco.

Today, Hog Island Oyster Co. has grown into one of the nation’s leading producers of sustainable shellfish and a pioneer in bay-to-bar restaurants. With three locations in San Francisco’s Ferry Building, their Oyster Farm in Marshall on Tomales Bay, and Oxbow’s Public Market in Napa, Hog Island’s passion is to grow, shuck and serve an exceptional oyster experience – and have fun doing it. Known for an unusually large number of longterm employees, aka The Hog Island Family, the company has created a culture of people who truly care. Their 200 employees enjoy full health care, vacation benefits, and retirement plans.