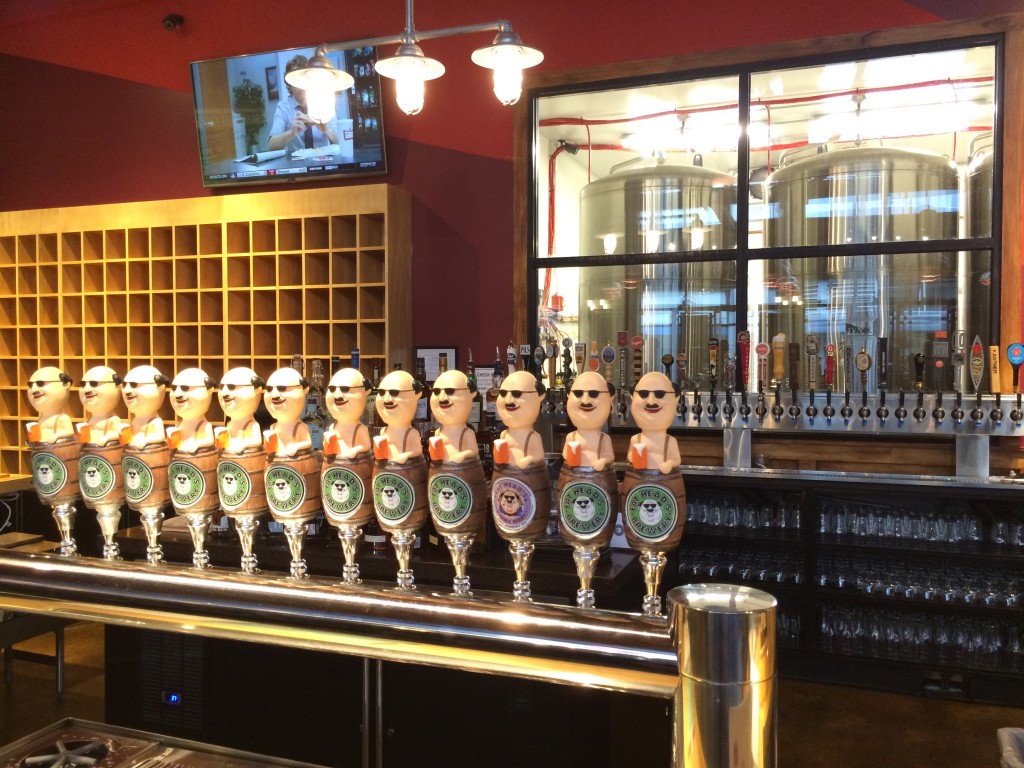 After announcing their intentions a little over a year ago to bring their Midwest style of beers to Portland, Fat Head’s Brewery will open their doors today at 11:00am. Their opening will feature a selection of their well done out of the gate house brewed beers along with their large food menu most well known for their massive sandwiches aptly named, Headwiches.

Fat Head’s Brewery new Portland location has made their home in the Pearl District, a mere two blocks west of Deschutes Public House and three blocks south of Rogue Distillery & Public House and the future home of 10 Barrel Brewing. Located at the corner of NW 13th Avenue and NW Davis in the former Sherman Clay-Moe’s Piano store, this location is very convenient to Portland’s downtown and Northwest district. For those worried about the constant parking congestion associated with the Pearl, there’s convenient underground parking across the street at the Whole Foods parking garage.

Glenn Benigni founded Fat Head’s in 1992 when he opened up Fat Head’s Saloon in Pittsburgh, Pennsylvania’s South Side Slopes neighborhood. For the next 17 years this craft beer destination grew their following for their well-known draft selection of 42 craft beers. And how did Benigni come up with the name of Fat Head’s? This was his unfortunate nickname given to him during his adolescence.

Move ahead to 2009 when Benigni teamed up with Matt Cole, formerly of Rocky River Brewing Company, to open their next Fat Head’s location in North Olmsted, Ohio. This location became more than just a saloon as it allowed Fat Head’s to begin their brewing aspirations as a brewpub. As Fat Head’s beers became more sought after they opened up a production brewery and taproom in Middleburg Heights, Ohio in 2012 that has the capacity to brew around 20,000 barrels per year. 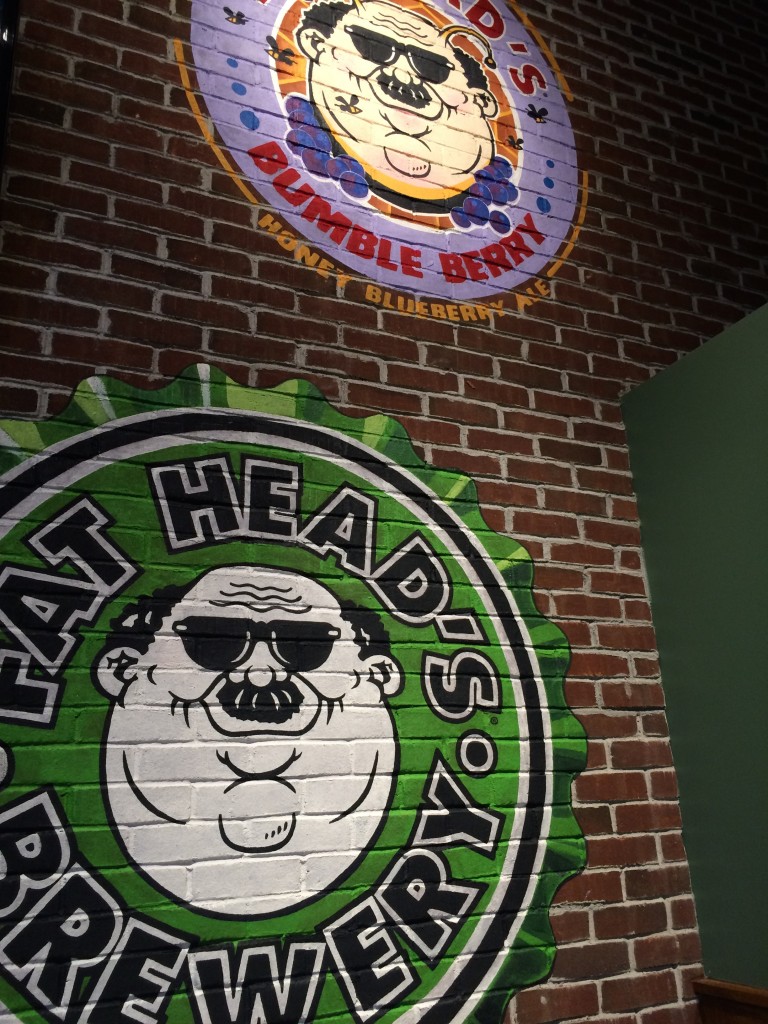 With the opening of their latest location in Portland, this marks Fat Head’s third brewing location, all led and overseen by Cole.

Over their short brewing history, Fat Head’s has won many brewing awards on the national stage. Most recently they were awarded a Gold Medal at the 2014 Great American Beer Festival for their Alpenglow Weizenbock in the German-Style Wheat Ale category. They also won back-to-back Silver Awards at the 2012 and 2014 World Beer Cup in the American-Style India Pale Ale category for their Head Hunter IPA. Then this past year at the 2013 Great American Beer Festival the won the Silver Medal in the Fresh Hop Ale category for Trail Head. This is not counting the various awards that their well-known and well-received Head Hunter IPA has won.

Here in Portland the brewing will be handled by Mike Hunsaker who recently relocated from Ohio to bring his Fat Head’s experience with him to build their portfolio of beers for Portland. Initially Cole will be overseeing the operations as he travels back and forth from Cleveland to Portland. Also assisting in the brewing will be Mark Poffenberger who will bring his experience from Indianapolis’ Sun King Brewing to Fat Head’s cellaring.

After getting their new brewhouse fully operational the Fat Head’s brewing team began brewing this past month. The JV Northwest 10-barrel brewhouse with the capabilities for producing up to 3,000 barrels of beer is a beautiful system. And to make sure they keep up with our Northwest palate, they’ll be incorporating a hopback for those intense hop forward beers we come to expect.

To offer the freshest beers possible Fat Head’s will be using 13 fermenters and 12 brite tanks with the idea of rotating each of these batches of beers about every 3 to 4 weeks. This will allow for a variety of in house produced beers that will run the gauntlet of beer styles, which may be up to 15 or possibly more, different choices at one time. “We created an exciting, engaging environment for our customers to enjoy what we do best, indulge in the art of fresh, craft beer,” says Cole.

Once their brewing production allows for it, they’ll be selling some of their beer to various bars across the Portland area.

For their opening they’ll have six house-brewed beers on tap with a seventh on the way hopefully later this week. Priced from $5.00 a pint, the six beers for Monday’s opening include:

If you’re not sure what to try, Fat Head’s offers beer flights of five 4oz beers, all of your choosing. They’ll also be offering up growler fills along with hopes of being able to fill corny kegs.

For a brand new brewery opening this lineup is quite solid and probably some of the best in quality of any brewery opening we’ve been to. With more time their beer is sure going to improve even more once their brew system is all dialed in. Our favorites include the locally named Zoobomb Dortmunder, Ultra Pils and the intensely hoppy Pack-A-Wallop. The so-called Pale Ale is not for the faint at heart. At 6.9% ABV, this 70 IBU hop monster lives up to its name!

Later this week they hope to have Sorcerer, a Belgian-style dark ale on tap. This was one of the beers that Hunsaker shared with us on a brewery tour over the weekend. A couple others that we were able to sample included our favorite of the bunch, Bone Head Red and Sunshine Daydream Session Ale. Bone Head offers up a slap across the palate of hops, what you’d expect from this 100 IBU and 9.0% ABV behemoth.

Beyond their own beer, Fat Head’s will also offer a rotating selection of 26 to 30 guest beers. For the opening they’ll be offering 30 craft beers predominately from the Oregon craft beer landscape priced from $5.00 per pint. They also have 2 ciders, a cask engine along with hipster and brewer favorite, PBR on tap. And for the kiddos they’ll soon have house made root beer to go along with their children’s food menu.

With all of this talk of beer one may need to some food to go along with it. Fear not, Fat Head’s is well known for their large, diverse food menu. This menu is both large in the amount of offerings and in the portion size.

Fat Heads features a large kitchen that thrives on value oriented made from scratch dishes. The in house smoker offers up pulled pork, brisket and chicken while the pizzas are fired up in a brick oven. They will also offer up gluten free and vegetarian food options.

But what Fat Head’s is most well known for is their massive sandwiches that they call Headwiches. These sandwiches are as large as your head and can easily be shared by two people. Of these varied Headwiches, they even brought some of their Pittsburgh heritage here to Portland with their Southside Slopes. This sandwich that features a mountain of kielbasa that is topped with sautéed pierogies and onions was voted the #5 best sandwich in the U.S. by Maxim Magazine.

On our recent visit during their preview we sampled their sautéed pierogies, mushroom basket, house salad, Salmon Reuben, Chick’n Little, a blue cheese burger, and a Parma Sutra pizza. All items were tasty and delicious but as previously mentioned, the portion size is quite daunting. The pierogies made of potato and cheese served with sautéed onions and sour cream was as good as any from Pittsburgh. The house salad was large and very fresh. Thankfully we chose wisely and went with the house made Bumble Berry Poppy Seed dressing made with its namesake beer. Nicely done!

The restaurant and bar space is quite massive as well. Seating capacity will be 278 all in an inviting open setting that is family friendly. There are a few TV’s strategically placed across the restaurant that will show some sporting events. The placement was well done in that the TV’s are not obtrusive but will allow one to be entertained.

For seating there are a couple of tall, long communal tables along with booths and tables for smaller parties. The bar looks to seat about 30 people along with a few long tall railings in the bar area that will be nice for when you’re waiting on a table.

To keep in Portland tradition, the bar itself has a story in itself. The wood that makes up the bar is of Portland legacy. Fat Head’s was able to purchase part of the former bowling alley lanes from the now defunct Hollywood Bowl. Many props go out to Fat Head’s for enshrining our favorite lanes that are now just a memory.

Fat Head’s Brewery is now open daily from 11:00am and is a welcome addition to Oregon’s craft beer scene.