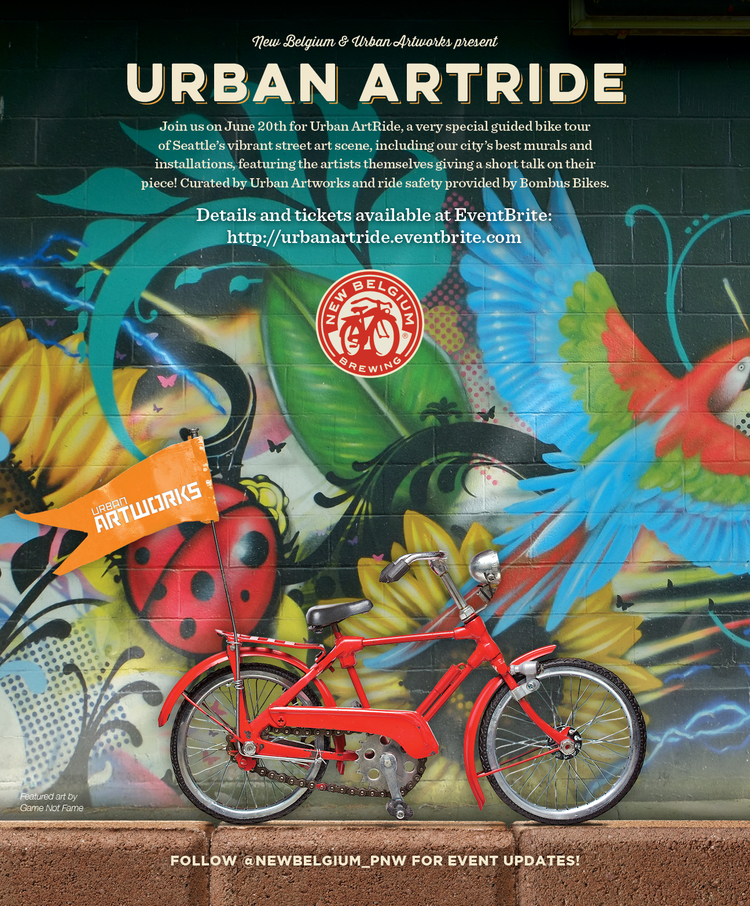 Ft. Collins, Colo., June 12, 2015 – New Belgium Brewing has teamed up with Seattle-based Urban ArtWorks to celebrate the city’s vibrant street art scene by turning it into a massive, outdoor gallery. Urban ArtRide will take place on Saturday, June 20, and will pedal art enthusiasts through Seattle’s best murals and installations, as well as introduce them to the artists themselves as they give a short overview on their piece.

The tour is curated and hosted by Urban ArtWorks, a non-profit organization that empowers youth and invigorates communities through public art. Several artists will speak to the inspiration behind their work and the processes involved in producing large outdoor works of art.

“For better or worse, Seattle’s urban neighborhoods are undergoing rapid transformation in many ways. One of those ways, that’s arguably for the better, is we’ve begun to see lots of new and beautiful public street art going up on walls throughout the city, thanks in large part to the work that Urban ArtWorks is doing,” said Todd Gillman, New Belgium’s Seattle Field Brander. “Many of these incredible pieces are tucked away in hidden spots, or they’re in plain view but on a fast-paced traffic thoroughfare where commuters aren’t really able to take them in. We’re hoping that by curating a two-wheeled tour of the best pieces in the city, we can take the idea of First Thursday Art Walk, but cover a lot more ground, while at the same time giving guests time to really see the art, as well as educating them on the pieces and on street art in general.”

The New Belgium-hosted after-party will take place at the end of the ride at Kangaroo & Kiwi Pub in Seattle’s Ballard neighborhood. The ride promptly departs from Pratt Fine Arts Center at 9 a.m.

Tickets are limited to 50 guests and are available at $25 each. Tell your friends, grease up those chains and toast to public art with Urban ArtWorks and New Belgium Brewing.