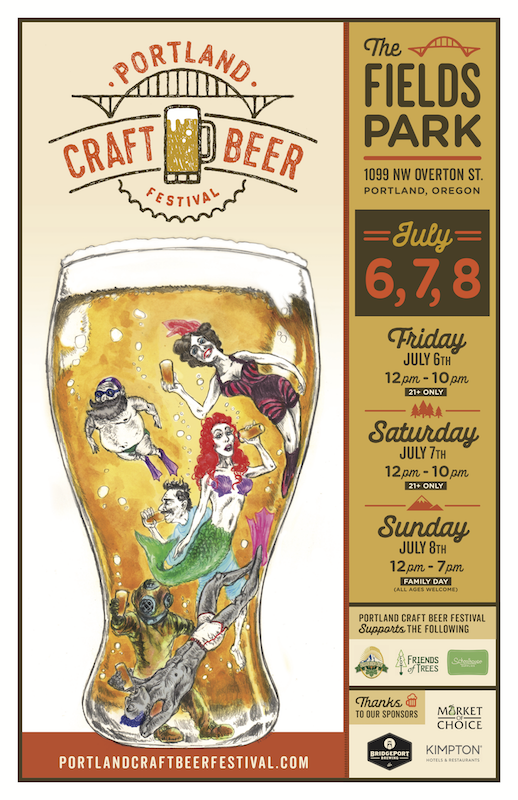 Summer is officially here and with it comes Oregon Craft Beer Month (OCBM) when the calendar flips to the month of July. The month is book ended by two great beer festivals – Portland Craft Beer Festival and the Oregon Brewers Festival.

To kick off OCBM, the Portland Craft Beer Festival (PCBF) will return for its fourth year to The Fields Park from July 6 – 8, 2018. During this three day festival held in Portland’s Pearl District, festival attendees will be able to sample beers brewed within the city limits of the Rose City.

The premise behind the Portland Craft Beer Festival is to give patrons the opportunity to sample beers in one location from many of the breweries that call Portland home. For the most part with a few exceptions, only beers, ciders, meads and wine that are crafted within the city limits of Portland are featured at the PCBF. Expect close to 100 different beers from more than 50 breweries pouring at the 2018 PCBF.

Also of note, the PCBF will be a cash only venue. There will be two ATMs on site, one inside the festival and the other outside the gate.

PCBF will again donate 10% of its proceeds to CaskAide, Inc. and its 2018 partner charities include Friends of Trees, Oregon Brewcrew, and Schoolhouse Supplies. The partnership of CaskAide, Inc., and the Portland Craft Beer Festival has donated $17,000 for local non-profits through its first three years.

Here’s a list of all beers, ciders, meads and wine pouring at the 2018 Portland Craft Beer Festival.

StormBreaker Brewing
Active Aggression IPA – A collaboration with Grains of Wrath Brewery
When I Froot, I Froot For The…

Portland Craft Beer Festival will also have four food vendors at the festival. These food vendors include Boke Bowl, PDX Sliders, Urban German, and Pig Sauce Co. all serving during the festival hours.