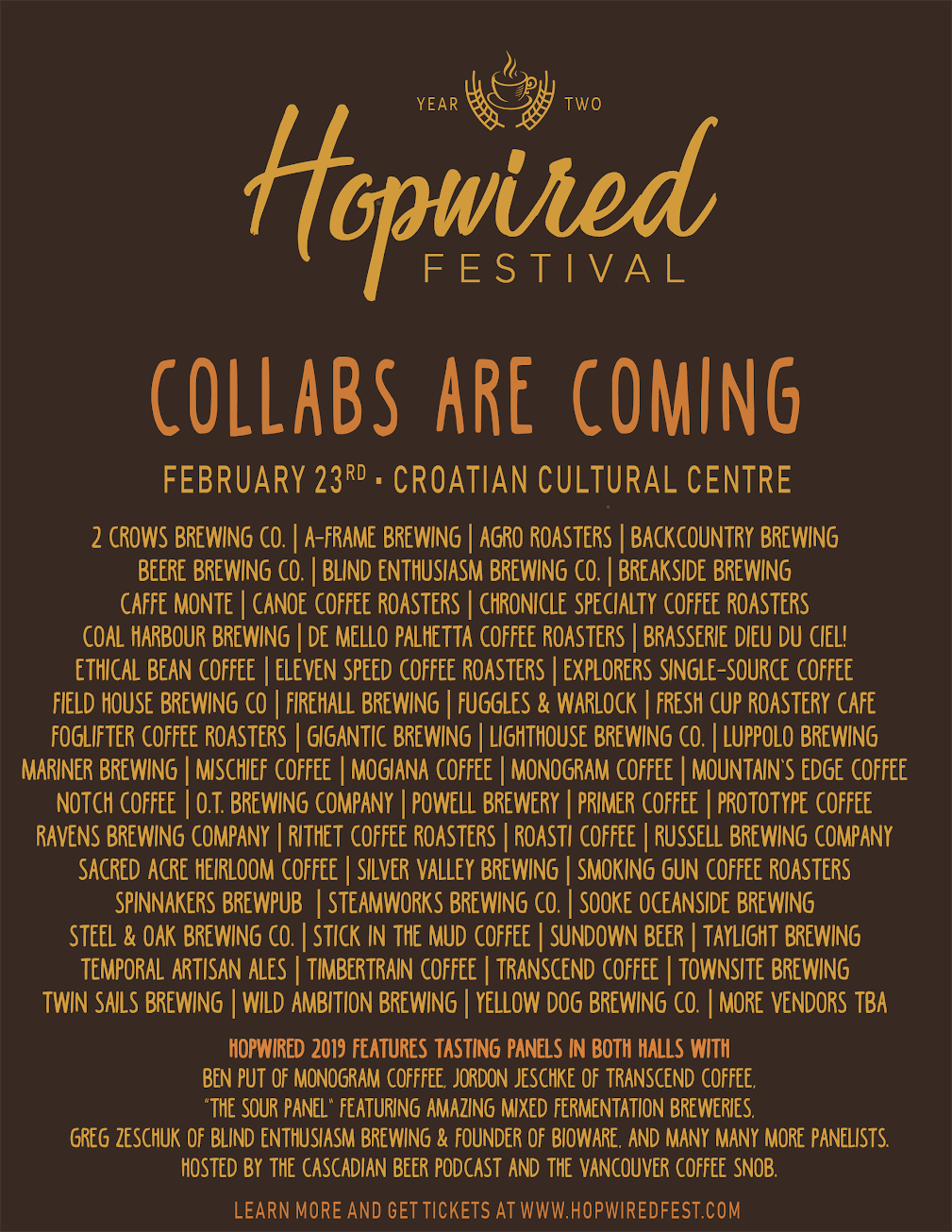 The Canucks are getting into the coffee beer game that we have been embracing here in Oregon and Washington for some time now. After a successful event last year, Hopwired Festival, presented by Espressotec and The World Famous CFOX, returns on February 23, 2019 to the Croatian Cultural Centre in Vancouver, British Columbia.

“The festival blended people’s favourite past times into one experience and received a ton of attention through from Vancouver, to North Carolina, and Auckland.” said Mike Willis, of West Craft in a statement.

“We were interested to move-on to another new and exciting [unannounced] collaboration concept festival but people kept asking for more Hopwired,” continues Willis in a statement. “We found inspiration from some of the collaboration partnerships that we helped set-up last year and people were moved to bring new beers and coffees from Across Canada and along Cascadia to make Hopwired Festival 2019 happen.”

Hopwired Festival is more than just a coffee beer event as there are a few educational aspects to this event. There will be a few panels during the day that includes Funk Yeah! Panel Chat on Cultured Beer with Coffee Additions, Foeder for Thought, Hoppy Together: Fruity Coffee in Beer, Citra Ass Down! and Crush this Coffee! among others.

Here are additional details on Hopwired Festival from the press release…

West Craft, the organizer behind Hopwired Festival, is expanding the festival with an all-inclusive drink commitment with tickets (no tokens!), increased seating, increased drink options and food options with a curated palate cleanser bar and double the amount of their popular on-stage tasting panels, hosted by Cascadian Beer Podcast and Vancouver Coffee Snob, which were very well received from guests at the 2018 event.

Festivities will kick off at 1:00PM with a welcome beer, which is a one-time-produced Prototype Coffee-infused-barleywine from Port Moody’s Twin Sails Brewing, which goes to support awareness of Good Night Out Vancouver, a non-profit organization that is dedicated to raising awareness about sexual harassment and assault on nights out.

After entry, you are invited to taste collaboration beers and coffees from over fifty-five craft breweries and coffee roasters, sip on delicious espresso poured from the amazing Espressotec team, and refresh your palate with the curated palate cleanser bar, which will feature a selection of rare and refreshing beers, and water served from Element H20.

Finally, the Vancouver Coffee Snob and Cascadian Beer Podcast grace the guests with their presence, again, at the end of the day to hand-out People’s Choice Awards for best beer, best espresso, best coldbrew, and best hot coffee.

For more information about Hopwired Festival or to purchase tickets for the festival, please visit: www.hopwiredfest.com