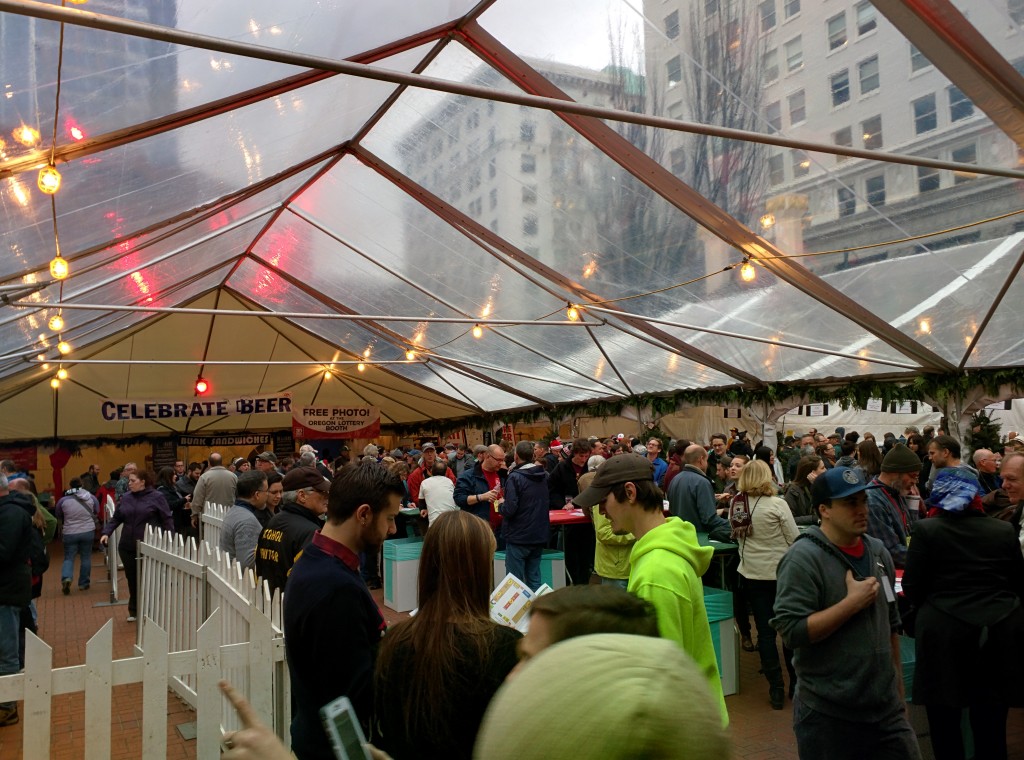 As we transition into the weekend, the 20th Annual Holiday Ale Festival is asserting itself once again as the number one beer event of the season. Sure… it’s a wee bit cold and less-than-dry outside, but within these tents lie a comfortable safe haven. Following suit with previous years, the tap list consists of 50+ standard releases accompanied by specialty beers; several of which may never be seen again. While we were unable to sample every option during day one of the event, we were able to try a few beers that were worth mentioning:

Bear Republic’s Cuvee du Santa was a great festival exclusive. This beer combined the complexity of a Flanders Red, the weight of a Strong Scottish Ale, and a few unique spice additions to create a perfect alternate to the several Imperial Stouts and Barleywines at the fest.

Rogue’s Rye Barrel Aged Double Chocolate Stout should fulfill the needs of all the strong dark beer fans in attendance. This stout packs a huge chocolate flavor with a graham crackery malt bill and a vanilla addition reminiscent of the timeless campfire snack, s’mores.

Portland’s own Gigantic Brewery formulated a beer that should satisfy every spiced beer fan’s craving without being too over the top. Black Pieter is a strong Belgian Black Ale with notes of molasses, licorice, and clove supported by a light ester profile and a dry finish.

Firestone Walker decided to showcase their Imperial Smoked Walker’s Reserve at the Holiday Ale Festival. Essentially this beer is an imperial version of a smoked oatmeal porter with a large rolled oat addition to smooth out the bigger body of the beer. Unsurprisingly, Firestone has once again formulated another amazing high ABV dark beer which should satisfy any smoked beer fan’s palate.