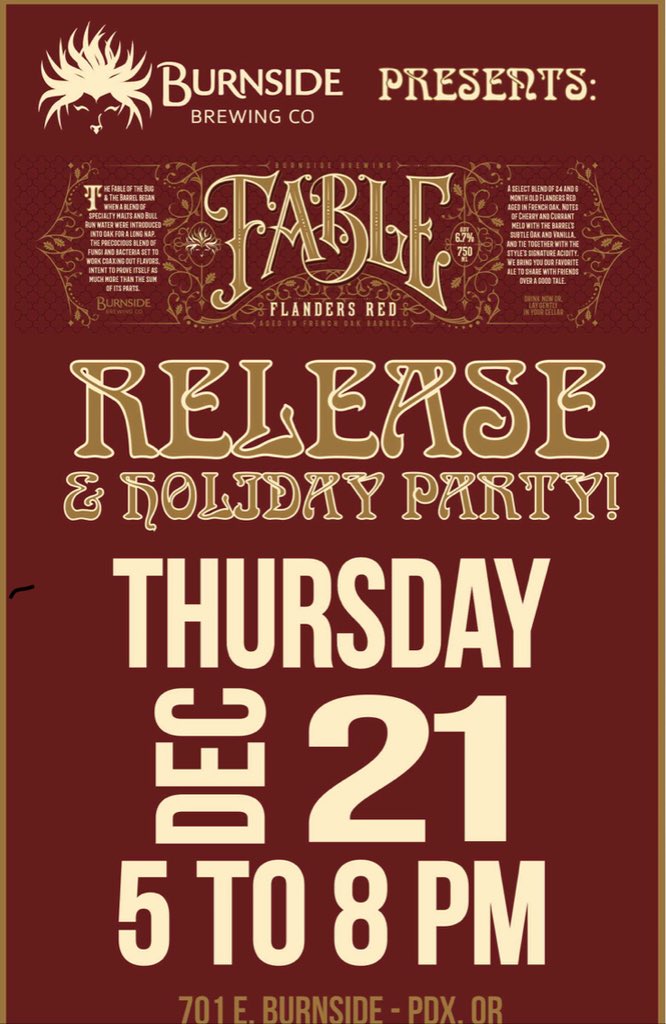 Portland’s Burnside Brewing will host its 2017 Holiday Party on Thursday, December 21st from 5:00-8:00pm. This day will also see the release of its 2017 Fable Flanders Red in a limited run of 750mL bottles.

Taking a blend of 24 month and 6 month aged Fable Flanders Red from French Oak barrels, notes of cherry and currant meld with the barrel’s subtle oak and vanilla. This then all ties into the signature acidity expected in a Flanders style beer and sits at 6.7% ABV.

We bring you our favorite ale to share with friends over a good tale.

The fable of the bug and the barrel began when a blend of specialty malts and bull run water were introduced into oak for a long nap. the precocious blend of fungi and bacteria set to work coaxing the flavors, intent to prove itself as much more than the sum of its parts. – Burnside Brewing

Fable Flanders Red is a very limited release as Jason McAdam, Brewmaster and Co-owner, hand bottled the beer. There will only be eight cases sold outside of the pub. Six cases will stay in the Portland market and the Eugene and Bend market will receive one case each.

Beyond the Fable Flanders Red release and tasting, Burnside will also be pouring a three-year vertical of Permafrost 2015-2017 alongside a few surprise beers from the brewery’s cellar. There will also be live music and snacks!

Dress warm and festive as there will be a prize awarded for the having the most holiday spirit! Stay up to date on the Fable Release Party by following the Facebook Event Page.