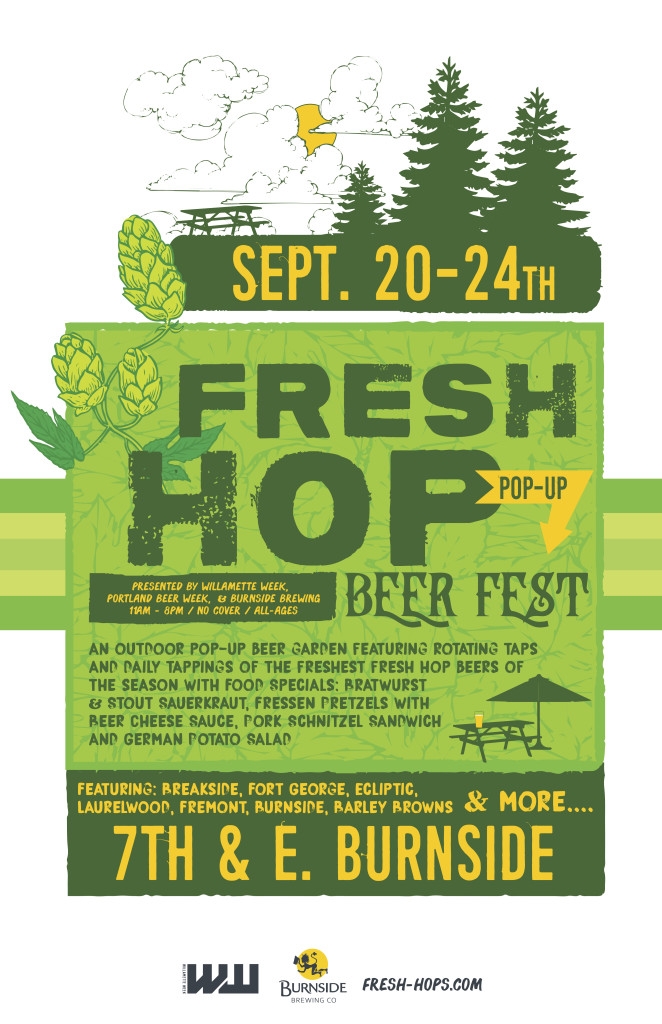 Fresh hop season is upon us once again.

I first wrote about fresh hop beers in 1998, when Bert Grant made one of the first fresh hop ales in the country. Since then, Oregon and Washington brewers have embraced fresh hop beers in a big, big way and given the world a new beer style — plus they’ve given beer fans a season to look forward to. There are several fresh hop fests upcoming, including the newest entry on the fresh hop calendar:

Fresh Hop Pop-Up Beer Fest
11 a.m. – 8 p.m. Tuesday Sept. 20- Saturday Sept. 24, Burnside Brewing Co., 701 E. Burnside; Free Entrance. $5 Pints, $3 half Pints. All ages. Cash is best; ATM onsite.
The event sponsored by Portland Beer Week, Willamette Week and my friends at Burnside Brewing features an outdoor beer garden, sunny (let’s hope!) and shaded seating and a rotating daily selection of the finest and freshest hop harvest beers of the season from some of the regions best breweries – eight taps devoted to the latest, dankest fresh hop releases, plus Oktoberfest style street food options in an all-ages setting. Each day will feature at least one brewery tapping this year’s fresh hop beers, so there will be something new every day starting today with Seattle’s Fremont Brewing.

Tues. Sept. 20 – Fremont Brewing: Tapping ‘Field To Ferment’ Fresh Hop Pale Ale in two versions, one with Centennial fresh hops and the other with Simcoes.

And the fest brings us a new twist on fresh hop beer: Hop-Shine fresh hop oil. “Upgrade your beers for .50 cents a half pint or $1.00 a pint to get a huge aroma and flavor boost even to already flavorful beers. Individual bottles will be on sale for $18 each. Hop-Shine is not like the other extracts and uses no alcohol but does capture the real whole hop, fresh hop flavor and aroma using new techniques. Hop-Shine can freshen up a beer without the beer loosing its intended character – a perfect fun new complement to the Fresh Hop Pop-Up Fest.”