Twenty years in, McMenamins Thompson Brewery & Public House continues to host its annual Barley Cup Brewfest. This year’s event will take place this Saturday on June 10th from 11:00am until 1:00am.

All of these breweries will be aiming to win the coveted Barley Cup Trophy. McMenamins is pitting pints from the best local breweries against each other in its annual taster’s choice competition. Jen Kent, head brewer at Thompson Brewery, will release her Gaia Imperial Stout in honor of the competition, combining blueberry, lemon peel and black pepper with dark notes of chocolate and coffee kiln malts in a one-of-a-kind brew.

Guests can purchase a Brewfest glass that includes 10 drink tokens for $17.00 to sample many of the Barley Cup beers and try to determine which one is their favorite brew. Then the winner of the Barley Cup will be decided by a popular vote among all attendees and the winning brewery will have their name and beer name forever engraved on the Barley Cup Trophy. 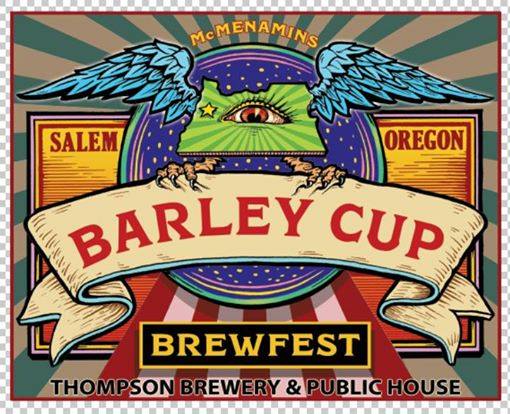 Here’s a list of what to expect on tap during Saturday’s Barley Cup Brewfest.

Oak Hills Brewery
Izard of POG IPA
As a constantly emerging style, New England IPAs only utilize hops that impart a tropical, juicy
sweetness rather than the classic bitter, dank or citrusy flavors that can come from bittering hops. These hazy brews maintain a creaminess all their own. Our New England IPA is infused with POG: passionfruit, blood orange and guava. Pog was originally invented by Mary Soon in Maui in 1971 and its original mascot was the “Izard of Pog,” a medieval looking gnome with a magic wand and stars around its head.
Enjoy this juicy, tropical POG IPA and give a salute to the Izard.
Special Techniques: Dry-Hopped
Special Ingredients: Lactose
Fruit: Passion Fruit, Blood Orange, Guava Malts: Pilsner, Wheat, Rolled Oats
Hops: Chinook, Mosaic, Zythos
OG: 1.062 TG: 1.015 ABV: 6.06 IBU: 10 SRM: 5

Vagabond Brewery
There She Gose
This is tart, fruity and righteously delicious. The sour, salty base beer lays down the funky
refreshment, while a heavy dose of passionfruit & guava turns the whole thing into a wall-to-wall tropical fiesta, with tart, ripe notes adding beautifully to the profile. It’s a marvelous mix of elements that collides with your mouth, like a fruit-filled asteroid of flavor, traveling at supersonic speed to the party.
Malts: Pilsner, 2-Row, Malted Wheat, Carafoam, Acidulated Malt Hops: Sterling
OG: 1.053 TG: 1.008 ABV: 6.00 IBU: 20 SRM: 4

Xicha Brewing Company
Sierra Saison
With special thanks to Salem Ale Works for collaborating on this project, Summer Hewn Saison celebrates the return of summer with soft malt flavor and strong citrus notes, complemented by fresh mango and strawberry sweetness. Fermented with a blend of Belgian ale yeasts and generously dry-hopped, pour the glasses and let this fruity Saison welcome you and your crew to the long-awaited days of the summer.
Malts: Rawr Pale
Hops: Amarillo, Mosaic, Citra
OG: 1.048 TG: 1.012 ABV: 4.70 IBU: 18 SRM: 5

Seven Brides Brewing
Mosaic and Orange IPA
This is a great tasting IPA that combines citrusy hops with real citrus fruit, resulting in a
magnificent blend of unique citrus aromas that will have you reminiscing of chasing the ice cream truck for your favorite orange creamsicle.
ABV: 6.00 IBU: 60

Sasquatch Brewing Company
Woodboy IPA
This IPA was loaded with local Oregon Hops and finished with a heavy hand of Citra Hops. ABV: 6.80

Cornelius Pass Roadhouse Brewery
Edelweiss Helles Bock
Helles Bock is a relatively recent addition to the Bock family and a lighter color than a traditional dark Bock. Brewed on the last day of January, this golden gem tastes better and better as it ages. There exists a perfect balance between the big malt backbone and hop bitterness which together masks the high alcohol content. Inspired by a year of studying abroad in Salzburg, Austria, with the hills full of the sounds of Griswolds. Prost!
Malts: Pilsen, Vienna, Wheat
Hops: Nugget, Perle
OG: 1.067 TG: 1.007 ABV: 7.74 IBU: 14 SRM: 4

John Barleycorn’s Brewery
Singled Out: Citra Double IPA
The Singled Out Series at John Barleycorns allows you to taste and appreciate a single hop
variety at a time. This Double IPA was brewed exclusively with a brewers favorite, Citra Hops. This variety has a large range of flavors and aromas that span from traditional Northwest citrus notes like grapefruit to tropical fruit flavors like melon and gooseberries.
Malts: Superior Pilsen, Caramel Vienna
Hops: Citra
OG: 1.080 TG: 1.012 ABV: 8.77 IBU: 85 SRM: 5

New West Cider
Black & Blue
Our “True Love” is juicy, jammy and packed with Oregon blackberries and blueberries. Not too sweet, not too dry; the perfect berry cider.
ABV: 6.40

McMenamins Edgefield
Barrel-Aged Perry Cider
Unfiltered and aged 6 months in neutral oak barrels, this Perry is made from true
Perry Pears, giving it a natural tannic complexity and bright acidity. In the glass, it’s cloudy and pale yellow, with a spicy bouquet of dried hay and lemon blossom. On the palate it’s dry, with a full, rich mouthfeel. Notes of apricot and grilled pineapple meet subtle hints of ginger, brine, and leather.
ABV: 7.20% McMenamins Edgefield

Blackberry Cider
Dark garnet in color, the aromas of fresh blackberries burst from the glass. The slightly tannic and tart blackberry component is balanced out by a small amount of residual sugar, while the fermented apple rounds out the mid-palate and finish.
ABV: 6.80%

McMenamins Edgefield
McMenamins Estate Cider
Our barrel-aged McMenamins Estate Cider is made from fresh-pressed Heirloom Apples
picked from Edgefield and Cornelius Pass Roadhouse. Rich and layered, this complex, unfiltered, barrel-aged dry cider is stylistically similar to those made in the Basque region of Spain. The cider is strong and tart, with a rustic nose encompassing baked apple and a hint of caramel. On the palate, the farmhouse character comes through.
It is bright and spicy, with citrus notes and an undercurrent of fresh-baked bread.
Special Techniques: Solera System ABV: 6.50%

Beyond the beers and ciders pouring there will be brewery tours from Noon to 5:00pm, distillery tastings from 3:00 to 7:00pm and live music in the evening beginning at 7:00pm.