Melvin Brewing National 2×4 Day, good music and beer, Founders arrives in Portland, Oyster Social Sunday continues and the rest of the beer events for the week of February 3rd.

National 2 x 4 Day with Melvin Brewing
Saturday Feb. 4, The BeerMongers, 1125 SE Division St.; NWIPA, 6350 SE Foster Rd.; Roscoe’s, 8105 SE Stark St.; Apex, 1216 SE Division Street; ABV Public House, 23588 NW Clara Lane, Hillsboro; Valley Growlers, 15735 SE Happy Valley Town Center Drive, Happy Valley;
What is it with the 2x4s already? Why is the Melvins man made of 2x4s? I mean, national 2×4 Day is plain enough, falling as it does on 2/04, and it IS a great excuse to drink big-ass IPAs and IIPAs and DIPAs from this notoriously good Wyoming brewery, but even head BeerMonger and major Melvins fan Sean isn’t sure about the 2×4 thang:

“Dunno about the 2×4 man but Jeremy the main dude at Melvins is crazy so that partially explains it. Sadly I don’t have have any pictures of that amazing, huge 4X4 rig they drove out here from Wyoming a few summers ago…
I first became aware of Melvins at the Alpha King Challenge in Denver during GABF in 2012. Jim Bonomo and I were there and at the time the brewery was called Thai Me Up (as it was in the back of a Thai restaurant). They won the blind tasting event and I believe there were some 150 other IPAs. The next year 2013 they won again. Now that little brewery is growing like mad…”

StormBreaker’s Third Anniversary
Saturday Feb. 4, StormBreaker Brewing, 805 N. Beech St.;
The StormBreaker crew will have a few special beers on tap for their third year, including Anniversary Triple IPA and Barrels Full of Chocolate, an imperial brown ale aged on cocoa nibs and aged in bourbon barrels for a full year and they hope to bring back some Barrel Aged Winter Coat too, plus beer and food specials all day, prize raffles and more. 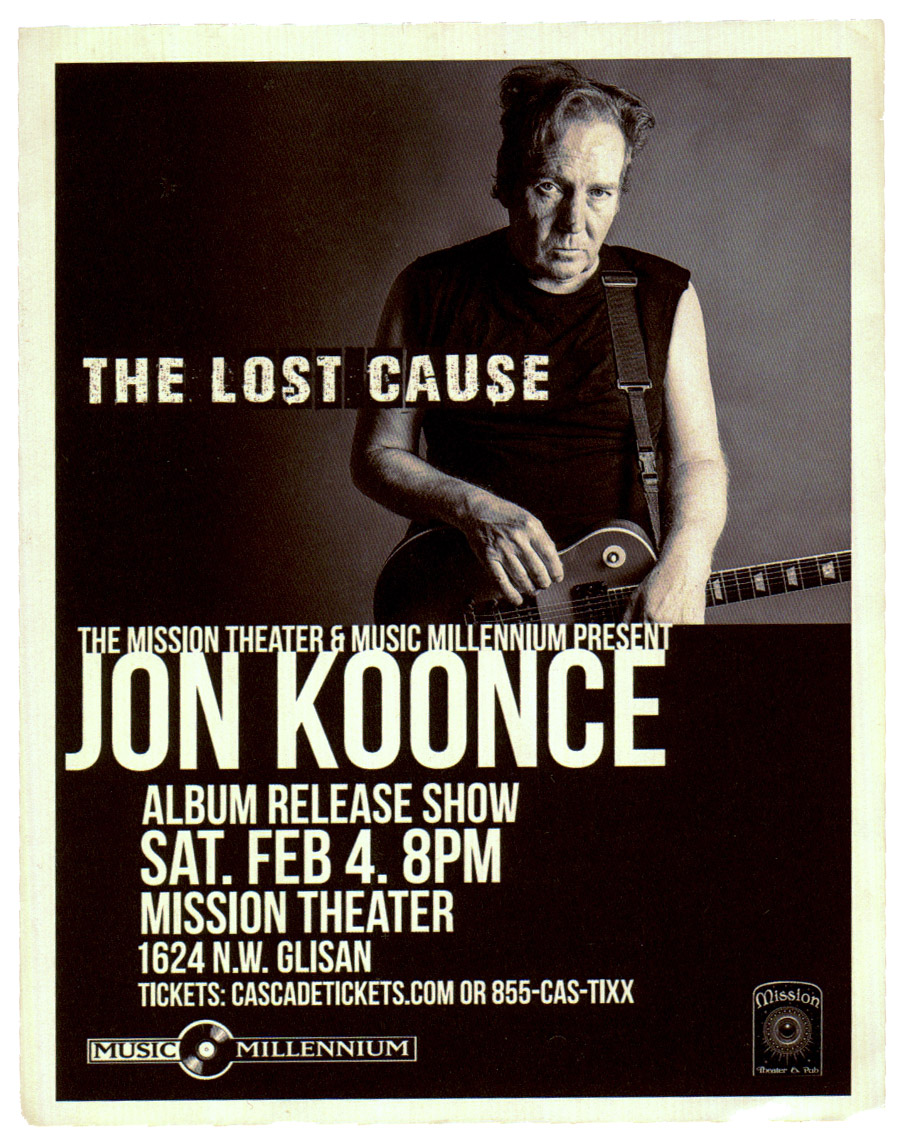 Jon Koonce CD Release Party
8 p.m. Saturday Feb, 4, McMenamins Mission Theater, 1694 NW Glisan St.; $10, Cascade.com
Right, most of you weren’t around when Johnny & the Distractions blazed a path through Portland clubs and went on to record some great — yes– records. LPs. Excellent ones. The man at the impassioned heart of the show was drummer-turned-guitarist, singer, songwriter Jon Koonce, who could safely claim the title of Portland’s Bruce Springsteen — not that he’d ever do so — thanks to his gritty, hard rocking songs and his workingman roots. Jon Koonce has never quit writing, playing and singing; he’s just put together a 10 piece band to perform the 10 new songs from his new album, Lost Cause. The band of Portland music veterans includes backup singers and horns and they’ll play the new stuff plus selected material from the Distractions and Gas Hogs catalog with a sprinkling of Otis and Tina for good measure. If you were there, you won’t want to miss this…if you weren’t, here’s a taste of what it was like…

Blues & Beer
7-10 p.m. Saturday Feb. 4, Baerlic Brewing, 2235 SE 11th Ave.;
Join local bluesman Steve Cheseborough for a night of blues and Baerlic beer, starting with blues dancing with Rachel Lidskog of Dance with Joy Studios at 7 p.m. and sip on beer paired specifically with the songs while Steve performs some of his favorite blues songs on guitar. Steve Cheseborough re-creates the blues and hokum of the 1920s-30s, interspersing the songs with stories, history and humor. The author of Blues Traveling: the Holy Sites of Delta Blues and one of the stars of Last of the Mississippi Jukes, Cheseborough turns any setting into a 1929 Mississippi took joint.

Oyster Social Sundays
Noon-4 p.m. Sunday Feb. 7, 14, 21 & 28, Gigantic Brewing Co., 5224 SE 26th Ave.;
Gigantic teams up with Tournant to bring you Oyster Social Sundays starting this Sunday with the release of Nevørmind Oyster Stout. They traveled to Netarts Bay for oysters from Nevør Shellfish Farm. They put 12 dozen oysters and 45 liters of oyster “liquor”into the boil to create a roasty and chocolatey stout, with subtle mineral and briney notes that pairs perfectly with fresh oysters on the half shell, shucked to order from Tournant.
Oyster pricing:
$3 ea.
2 for $5
$15 half dozens
$30 dozens 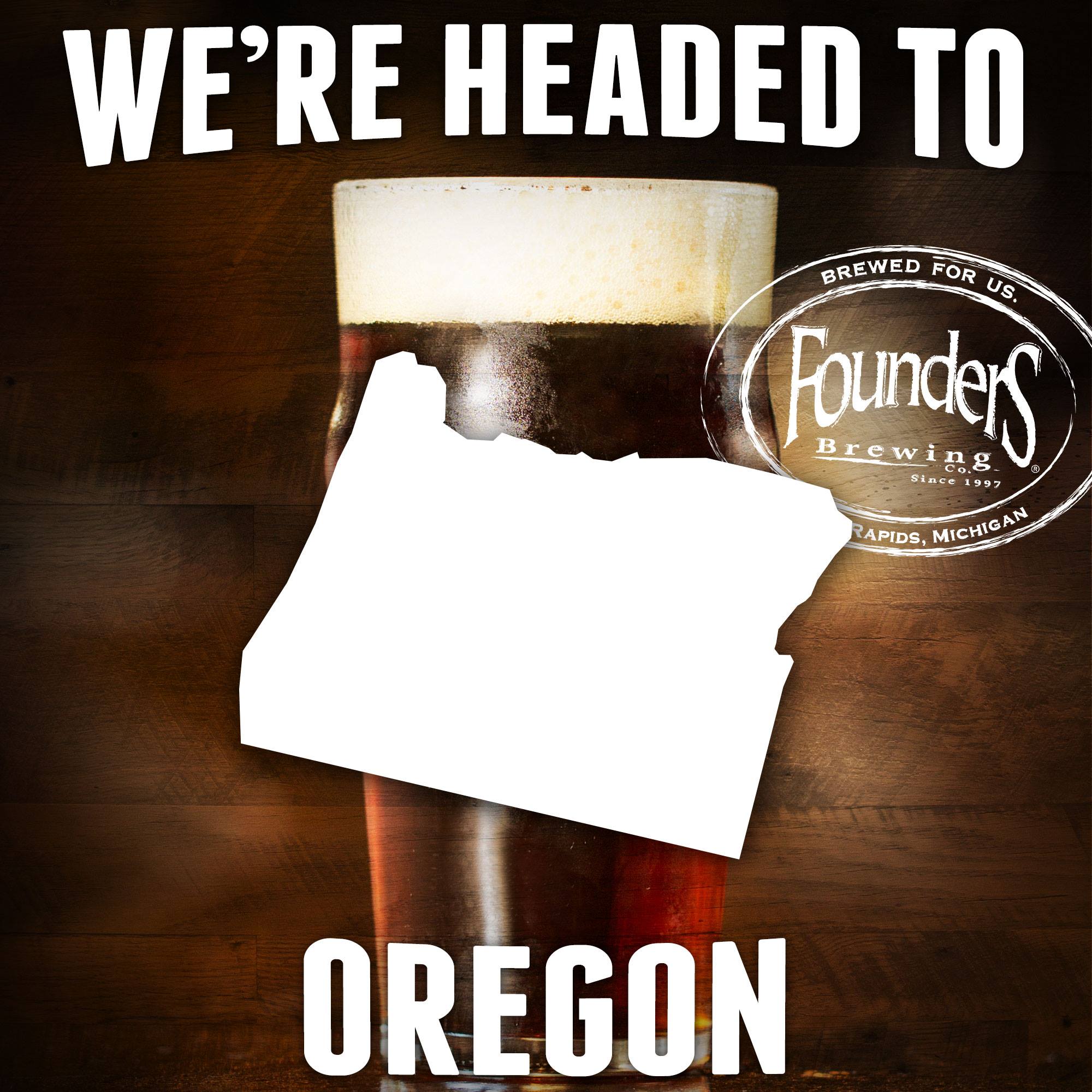 Founders Brewing Comes to Oregon
5 p.m. Monday Feb. 6, Roscoe’s, 8105 SE Stark St.;
Roscoe’s is one of the first Portland spots to welcome Founders Brewing to Oregon this week with a taplist of beers from the Grand Rapids, Mich, brewery that includes: All Day IPA, Centennial IPA, Dirty Bastard, Azaca IPA, Red’s Rye, Porter, Nitro Oatmeal Stout, Rubaeus, Frootwood Cherry Ale Aged in Maple Syrup Bourbon Barrels, Backwoods Bastard, and Breakfast Stout. The Founders crew will be in the house to answer questions and give away some schwag.

And that’s just the first of 20 local events – here’s the list from the Founders folks:

20 Founders brewery representatives will be in town Monday-Thursday and we will be taping Seasonal, rare barrel beers and some of our favorites at each event.

Two Flowers IPA Tasting
6- 8 p.m. Wednesday, Feb. 8, Hawthorne Hophouse, 4141SE Hawthorne St.;
Coalition Brewing’s new Two Flowers IPA is an IPA infused with CBD oil and hemp juice and Elan, head brewer from Coalition, along with Bill from Half-Baked Labs, will be at Hawthorne for a tasting of this new beer. They will be around to ask questions about the properties of this beer, and tell you everything you want to know about weed and beer but were too afraid to ask.

Meanwhile, here’s what Wikipedia says: Cannabidiol (CBD) is one of at least 113 active cannabinoids identified in cannabis. It is a major phytocannabinoid, accounting for up to 40% of the plant’s extract. CBD is considered to have a wide scope of potential medical applications – due to clinical reports showing the lack of side effects, particularly a lack of psychoactivity (as is typically associated with ∆9-THC), and non-interference with several psychomotor learning and psychological functions.